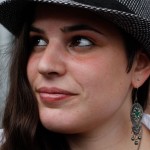 Sara Pagiaro is an italian filmmaker based in Boston with a background in music from Berklee College of Music. As a student at Berklee, she wrote and directed her first documentary, “Without Any Fear” dedicated to LGBTQ musicians. At Berklee, she start producing, filming and editing live shows. She worked for live performances and interview segments of major music artists such as Justin Timberlake, Annie Lennox, Al Jarreau, Jimmy Page, Jamie Lee Curtis, Todrick Hall, Amanda Palmer, and many more. She produced, directed and edited, the short movie "The Dream" that was selected in various film festival and won the Audience Award at the Online New England Film Festival 2016. Then, her short documentary “Meet The Artist: Melissa Glick” was selected at the Boston Short Film Festival 2018 She recently founded a video production company “Circle Motion Production.” And is working on an inspiring documentary about the journey of a female singer who brings the healing process of circle singing around the world.