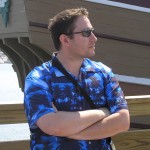 Nathan Suher found his passion in filmmaking as a teenager, when he produced “Deady Education”, an award-winning short documentary based on a local news story. After graduating from Boston University’s College of Communications, Nathan pursued his passion in Los Angeles, gaining valuable knowledge on productions for NBC (Fear Factor), ABC (The Bachelorette), MTV (Tail-Daters), and A&E (The Incurrable Collector). Nathan took his knowledge back to the East Coast, where he launched two production companies, Reels Media and IM Filmworks. As the president of Reels Media Nathan has produced and directed over 40 productions for companies such as Habitat for Humanity, The YMCA, and Nordstrom Rack. Nathan continues to grow his other production company, IM Filmworks which specializes in narrative filmmaking projects. Since 2008, Nathan has produced 12 films, each one with increasingly larger budgets. Nathan’s expertise in all areas of film/video production has earned him several awards, including the 2014 Best Regional Film award at the SENE Film, Music & Art Festival, the 2012 Wootube Video of the Year for American Dreamers’ “Precious Time”, and for his PSA for The Education Exchange, “Across the Finish Line”, which won the Grand Prize as well as Best Writing, Best Editing, Best Cinematography, and Best Voiceover for the 7DAYPSA in 2011. Nathan’s recent productions include 2013’s homage to the early silent era of filmmaking, Right There. 2015’s Holiday Horror/Comedy and festival favorite at last year’s Rock & Shock Film Festival, Scary Little F*ckers (A Christmas Movie), and 2015’s Psychological horror/drama, Next/Door. Nathan is currently in preproduction of his first feature film, Higher Methods, a psychological horror/mystery which will be filmed this summer. 1993 Best Student Documentary 'Deadly Education' - Massachusetts Student Film Festival 2010 Audience Award 'Female Persuasion' - Providence 48 Hour Film Project 2011 Best Overall, Best Cinematography, Best Script, Best Voice-Over, and Best Music 'Across the Finish Line' - Providence 7DAYPSA 2013 Video of the Year 'Precious Time' - WooTube 2014 Best New England Film 'Right There' - SENE Film, Music & Art Festival