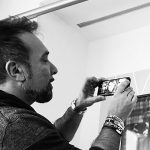 Through the years he has collected many experiences in several creative areas as actor (in commercials, theatre shows, Italian TV, music videoclips for Italian and foreign musicians), radio speaker, camera operator, editor and director. His interest in visual narrative starts in 1980. A young kid of 11, he begins to draw comics inspired by American and Japanese graphic novels and animations, of which he is a great fan. In 1985 Graziano starts his first experiments in video shooting with a 8mm camera: with his friends and parents he shoots fake TV shows and creates special makeup fx, latex masks and transformations in a “V-Visitors” style. Some years later he graduates in Arts & Graphics. In 1991 he shoots and edits his first short movie (with analog technologies): PENSANDO A LEI (Thinking of her). In October 1999 he starts to attend a dubbing and acting course in Milan, and just a few months later he starts to have parts as a walk-on in Italian TV shows and as an extra in TV commercials. Between 1999 and 2005 he works as actor, radio speaker, commercials dubber and as independent camera operator and editor. In April 2005 Graziano Molteni shoots his first “official” short movie, a western comedy: THREE JERKS – I TRE GUASTAFESTE. In June 2005 he writes and directs his first music video for the Italian musician Garbo (a big name of the 80s Italian New Wave): ONDA ELETTRICA (Electric Wave). The video wins the Best Story award at the “7° Premio Videoclip Italiano” (7th Italian Music Video Award). In 2006 he stars his own Film Production Company, called BASELUNA FILM (then, in 2015, BASELUNA FILM SRLS). In Spring (February to May) 2006 he directs and plays his short movie UN PICCOLO FAVORE (A Little Favor). In September 2006 he directs, co-produces and plays his short movie RITORNO A CASA (Homecoming). Then in 2006 and 2007 he shoots and edits special backstage/corporate/internal projects for important companies and brands as Michelin, Blaupunkt, Crodino, Aperol, Lancia and Festival del Cinema di Venezia. In 2007 he plays again in several commercials and TV promos, and directs the short movie LA PARTITA PIU’ IMPORTANTE DELLA STAGIONE (The most important match of the season) for the short movie format “SOTTO5” produced by SKY TV. In February 2007 he works as a dubber in the italian version of the “THUMB WRESTLING FEDERATION” show, for Nickelodeon TV channel, dubbing six different main characters. In 2010 he’s focused on several Tv projects, he shot 2 sit-com, one about Dance (UNA PEDATA DETRAS) and one talk about the Movie Dubbing (FUORI SINC) such as winter and co-author, director, producer and editor. On Arpil 2011 he records a new TV Commercial TRONY. In the same year he comes back to Theatre direction with The Labyrinth Company with a Comedy peace taken from Shakespeare’s AMLETO. In 2014 he starts a Film Productions Company in the US, called MOLTENI MEDIA PRODUCTIONS, LLC. From 2014 to 2018 he has directed, produced, edited a lots of Corporate movies, Short Movies and Music Videos. Now, he continues to create, direct and edit his own projects plus he produce movies, music videos and documentaries with young directors and fimmakers.