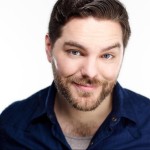 Lincoln and Rachel Hayes are Pretty Beard Productions, a Vermont-based production house specializing in short films and web sketches. Rebranded in 2015, Pretty Beard has produced two web videos, "The People for the Ethical Treatment of Rancors" and "Dinnergate" and a short film, "What Kent Did" which is currently making the rounds of the festival circuit with a recent screening at the Chain NYC Film Festival in New York City in August, 2016. The couple will soon be seen in the upcoming feature film "Northland" from Lone Tree Productions.