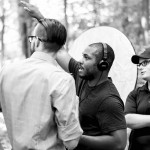 Kewan J. Harrison is a filmmaker based in Connecticut. In the fall of 2015 he graduated from Union College where he earned a Bachelor’s of Arts in Film Production and Management. While attending Union College he completed several short films, his first of which was “Nyles: The Abduction”. More recently he has completed a senior thesis titled, “Chasing Embers” and independent short titled “The Honest Truth”. With each film Kewan comes closer to his goal of creating works of art that tell “uniquely human stories,” or stories that resonate with audience members on a deeper, more thought-provoking level. Currently, Kewan is working tirelessly on several productions with his newly formed production company 10/10 Productions. In the future Kewan hopes to work on narrative films, music videos and commercials.