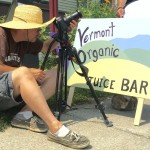 I am a graduate of the Video Production program at Lyndon State College in Vermont. I worked for twenty-two years in Community TV, including seven years as Executive Director of ORCA Media in Montpelier. My current project is a feature film, Made in Vermont, which is having test runs in selected theaters during the summer and fall of 2019, and is traveling the festival circuit. Made in Vermont is a comedy about a group of producer-types with their careers on the skids, and their quest to beat the deadline to enter the Golden Gizzard Film Festival. More info: MadeInVermontMovie.com I was the owner/operator of Kitestring Media, located in Vermont USA, but closed the business in 2016 to pursue full-time work in the public sector.