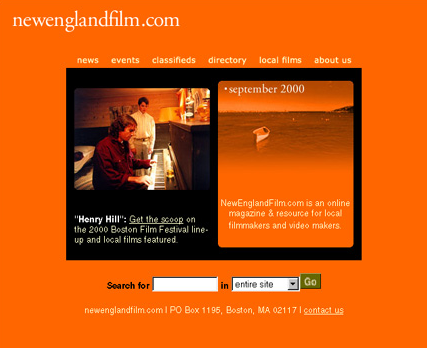 An early iteration of NewEnglandFilm.com from our archives (a bit low resolution, but it was 20 years ago).

The time has come for NewEnglandFilm.com to be handed off to new leadership. See the current call for proposals.

When I founded NewEnglandFim.com, I had no idea that I was embarking on a business that would last for over 20 years and change so many lives, including my own.

In August 1997, I was in grad school at Emerson College, and I thought, wouldn’t it be great to have a magazine about the local film industry? I had no money and no advertisers, so my then-boyfriend (now husband) Geoff Meek suggested that I launch it as a website. I thought, hmm, that’ll be a great way to generate some interest and then I’ll turn it into a magazine.

It wasn’t more than a few weeks in that I realized that the timeliness, interactivity, and accessibility of the Internet far surpassed my original goals. Nearly immediately, I started getting contacted by others who were so excited to have a venue to find a film gig, learn about an event or organization, or share their own news about their film. I dropped the idea of the print magazine.

Over the years, I have talked with so many people about how important NewEnglandFilm.com has been to them and their careers. And NewEnglandFilm.com has been supported by so many individuals and local institutions over the years. David Kleiler was one of the first people who believed in my idea, which gave me the confidence to move forward. Susan Kouguell from Su-City Pictures and Matt McDonough from Arts & Entertainment Insurance were some of my very first advertisers. The idea received early support and encouragement from people like Anne Marie Stein from what was then the Boston Film/Video Foundation; Susi Walsh from the Center for Independent Documentary; George Marshall from Rhode Island International Film Festival; leaders from Rebecca Richards to Cheryl Eagan-Donovan to Alecia Orsini at Women in Film/Video New England; and Robert Patton Spruill and Patti Moreno from the New England Film/Video Festival. We’ve worked with amazing writers and freelancers such as Erin Trahan, David Joseph Clarke, Evan Crean, Alli Rock, Alli Walton, Casey Stirling, and John Arvantis. Over the years, we have been able to keep the site going through fiscal sponsorship with Filmmakers Collaborative and sponsorship support from so many local businesses such as CP Casting, ArtPayroll, Rule Boston Camera, Hunt’s Photo and Video, AdamCamera, Talamas Boston and others. If I’ve omitted you, I haven’t meant to. Thank you to all of you out there who have been a vital part of keeping NewEnglandFilm.com going for over two decades.

But the time has come for NewEnglandFilm.com to be handed off to new leadership. In 2010, I decided to go back to graduate school for my Ph.D. And in 2017, I accepted a full-time tenure-track position in the Communication Studies department at Bridgewater State University in Massachusetts. At this point in my career, I am simply more interested in teaching, writing, filmmaking, and speaking, and I simply don’t have the time to dedicate to the future of NewEnglandFilm.com.

This website has given me so much, and it has been difficult for me to make public my decision to step away. But the time has come, and I look forward to hearing from those of you who might be interested in taking on the website and business. Take a look at the official call for proposals, get in touch if you have questions, and take a look at what I’m up to now.

I would like to receive any new leadership proposals by January 31, 2021. I am committed to running, supporting, and transitioning NewEnglandFilm.com to new leadership by June 2021. If for some reason, a transition is not underway by then, I will need to shut the site down.

Thank you for supporting NewEnglandFilm.com for over two decades!