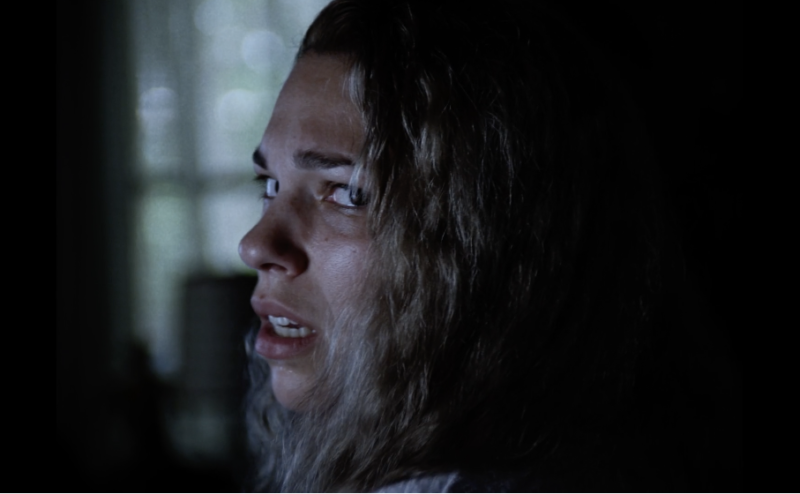 NewEnglandFilm.com talks with Sean Temple and Sarah Wisner about their film Water Horse which screens in the 2020 Online New England Film Festival.

NewEnglandFilm.com: When did you know you wanted to become a filmmakers?

Sean Temple/ Sarah Wisner: We both loved film from a very young age and eased into the idea of making them in college. We met in Boston while Sarah was getting her MFA in Screenwriting at Boston University and Sean was getting his MFA in Directing at Emerson College.

Temple/Wisner: The catalyst for Water Horse was a nightmare Sarah had, so our biggest goal with the film was recreating the anxiety of that experience. When Sarah had her nightmare she instinctively knew the film should be called Water Horse. Water horses, also known as Kelpies, are shape-shifting creatures of Scottish folklore that trick and abduct people to drown and eat them. Sarah’s subconscious filtered this folklore through her nightmare and it affected a lot of choices we made.

For example, the most famous water horse is the Loch Ness monster. Growing up in Vermont, it was impossible not to make the connection to our very own lake monster, Lake Champlain’s Champ. For this reason, we decided to film in and around Lake Champlain. The connections and references to Kelpies aren’t super explicit, but they’re definitely there. We hope it brings another layer to the film for audiences to explore.

Temple/Wisner: We had an incredible festival run last year. We were lucky enough to play at some of the biggest genre festivals in the USA, including: Fantastic Fest, Boston Underground Film Festival, Beyond Fest, and many more.

Our most memorable experience was when we premiered at Boston Underground. Listening to the audience audibly react the way we had hoped filled us with joy. It’s a weird little film, and it’s certainly not for everyone. But the people who do connect with it really seem to experience the dread and anxiety our characters go through. Creating that feeling was always our ultimate goal.

Temple/Wisner: Almost all of our cast crew were people Sean went to Emerson with or people they knew. Charlotte Rea, our lead actress was in a few of our MFA shorts. We met Darren Bailey, our producer, actor, stunt coordinator, and general handyman when we moved to LA.

NewEnglandFilm.com: How does your film fits into today’s current social and political moment?

Temple/Wisner: We like to think an audience’s experience watching Water Horse is similar to our experience developing it. On the surface, Sarah’s nightmare was rooted in visceral images and sound, but once we decided to adapt it into a film we started to dive into what the nightmare could mean. We quickly realized our fears and anxieties about the current political climate and the modern world permeated Sarah’s subconscious. Resulting in a harrowing real-life nightmare dealing with the outside factors that can come into your family’s life, unpredictably and irreversibly.

Temple/Wisner: We think we’re drawn to folktales because these stories are a pure depiction of society’s deepest fears of the time. We think it’s very interesting that the fears associated with folktales are still relevant today and we’re drawn to filter them through our own modern experiences and fears.

Temple/Wisner: Our latest short, Thorns, is currently on the festival circuit. We were going to shoot the most ambitious short film we’ve ever done, The Thaw, in March, but we had to delay due to Covid-19. The Thaw is inspired by a Vermont folktale where farmers in the hills without the resources to survive the harsh winters would freeze their elderly relatives, store them for the winter, and thaw them out in spring, healthy and refreshed. Our vision for The Thaw has only grown stronger. When tradition fails Ruth, she is forced to burn her past and face an uncertain future. We always intended this narrative to be a metaphor for our time. What systems have failed us? What can we imagine will take their place? We’re excited to tackle this film once it is safe to do so.

Temple/Wisner: Trying to answer this question succinctly quickly becomes overwhelming. If anyone wants to personal reach out to Sean, he’d love to discuss filmmaking and any other questions you have. He can be found on Twitter at @sean_temple.