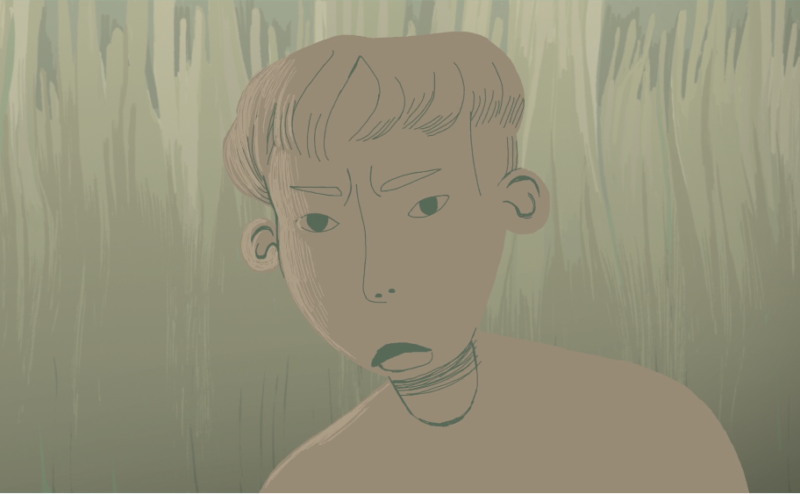 NewEnglandFilm.com talks with Erica Moriconi about her film Downhill, which screens in the 2020 Online New England Film Festival.

We sat down with animator Erica Moriconi to learn more about her filmmaking process, and her latest film Downhill, which screens at the 2020 Online New England Film Festival.

Erica Moriconi: I have always been artistic, but I didn’t center in on animation until late in high school. I’ve always loved drawing, and I realized how animation can be a storytelling tool, with a stronger stylistic hand in the process than with live action. I studied at Massachusetts College of Art and Design, and I received my BFA in animation in 2018.

Moriconi: Downhill is my undergraduate thesis film. I made this film after living in a cramped, broken little apartment in college. I had a negligent landlord (like many in Boston) and documented a laundry list of issues. Living there became this harbor for stress and dysfunction. I joked while I was living there that we were under a curse, so I catalogued the issues with the apartment and put them under a microscope; made them really dramatic and exaggerated and plague-like.

I’m inspired by magical realism and toeing the line of fiction and perception. I overdramatized all these features of the apartment and made it like a living antagonist, so having characters move around the space would become uncomfortable and confusing. I like when a film has narrative, but the narrative is obfuscated just enough to create a dreamy, liminal uneasiness.

While I prefer animating my films, I’m inspired a lot by live action, especially cinematography. Andrei Tarkovsky’s take on sci-fi and poetic narrative was a big inspiration while I produced Downhill.

Moriconi: I finished Downhill in 2018 and I’ve been really blessed to have it screen at 15 festivals internationally. After I graduated, its festival premiere was at a screening dear to me, at Weird Local Film Festival in Somerville, MA. COVID aside, WLFF has an edition every 3-4 months, and it’s always a gem of filmmaking and friendship, and I’ve connected with so many wonderful artists in the area because of that festival. I also got to attend Animation Block Party in Brooklyn with this film, and it was a huge honor. I was featured in a block alongside other female filmmakers from a whole spectrum of genres and life experience. I love that I got to stand alongside colleagues of the indie animation world during that Q&A, take the mic, and…talk about wanting to burn my apartment down.

Moriconi: My crew was all me, which is the perk (or curse, perhaps) of drawing your entire film. I owe the final outcome to many, many critiques I received while creating this film, and the help of some friends with a few loose ends of post-production. I feel really lucky that I got to make this film while in school; the concentrated environment of makers in an academic space is really unlike anything else, and I owe this film to my peers and professors, and the resources and time I had access to.

Moriconi: This film is a reflection of experiences where I felt trapped, angry, helpless, and cooped up in an unhealthy environment. Those feelings have definitely reemerged for me in the COVID lockdown more than I ever thought they would. Being stuck in the house is a difficulty, and challenges mental health.

However, in commenting on inadequate housing, as Downhill does, there are additional systemic barriers to health and wellness that need to be considered, too. My apartment that inspired this film was not even the worst of horror stories I’ve heard from Boston renters. While my quality of living there was subject to an ineffectual landlord, my position as a white, student transplant to Boston is still privileged. As we continue to face an unknown future, I hope we all keep a critical eye on landlords and legislators. I hope that these crises allow us to reimagine a better, more accessible housing culture, and that we are inspired to support our neighbors. Housing is a human right.

Moriconi: I used the characters in Downhill to showcase different expressions of coping with an immovable situation–rage, obsession, apathy–and the symbiotic relationship that plays out because of that, between these tenants and their environment. These are all valid and potent emotions, and they represent a version of everything I’ve felt.

Ultimately, everyone in that apartment perishes except the character focused on finding a way out. That’s not to say the solution to our problems is to run, but to look forward. The film ends with this character taking a deep, resolute breath, over an open landscape. With that final breath, I hope we feel the burden of what’s transpired lift off of her. In certain situations, it is worth turning away from something that has hurt you, and letting it burn, and seeking something better.

Moriconi: I have a few personal animated projects in the works. I’m also part of a group of artists called the Golem Collective, founded in Boston a few years ago, and we make weird and goofy animated collaborations that are always centered around a theme. You can stay updated on my animation on Vimeo at vimeo.com/moriconi, and the Golem Collective are online as well at vimeo.com/golemcollective.

Moriconi: Attend festivals you aren’t involved in, attend any festival you can! This advice is of course a bit different in a COVID world, but putting yourself in a space to see new and unexpected films is so important. You meet filmmakers, film enthusiasts, musicians and other artists, and curators, and it puts the work you do in context. I feel like surrounding myself with film from perspectives outside my own is paramount to being a filmmaker and a person.

Moriconi: I keep regular sketchbooks, which is a big part of my artistic practice. I like being in the habit of drawing and documenting as much as I can. That way I have a bank of images to inspire me when I’m later working on a larger project–my sketchbooks have always helped me fill in the gaps of a storyboard. Every filmmaker has a different way of working out ideas and translating them to the screen, but finding the thing that works best for you is key to strengthening your directorial voice. Sketchbooks can also be great because it’s important to make art for fun without the pressure of showing it to anyone!