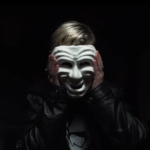 Felix Kiene-Gualtieri about his film Masked

NewEnglandFilm.com talks with Felix Kiene-Gualtieri about his film Masked which screens in the 2020 Online New England Film Festival.

We caught up with Felix Kiene-Gualtieri, a young filmmaker from the Raw Art Works Real to Reel film school program in Lynn, Massachusetts. His latest film Masked explores the actual feeling of mental health problems, rather than their explanation.

Felix Kiene-Gualtieri: I had tried a bunch of art forms throughout my time at RAW Art Works in the past. But when I was old enough to join the film school I wasn’t really thinking much of it, I just wanted to try it. Turns out I love making films! And I learned so much from the instructors there too!

Gualtieri: I wanted to make a film about the mental health situation that I experienced at the beginning of high school. I wanted to get out how I felt somehow, and I thought that film would be a good medium to do it. Mental health is something that is very important to address, especially with teenagers and I wanted to show how it felt rather than explaining it.

Gualtieri: There’s a stigma around mental health in today’s society. A lot of people try to hide how they feel or what’s going on. It’s really hard to be vocal about how you feel sometimes. And I think as a society we need to normalize mental health.

Gualtieri: I want people to know that hiding behind a mask doesn’t really help. And as scary as it may seem, confronting what’s going on can really benefit you.