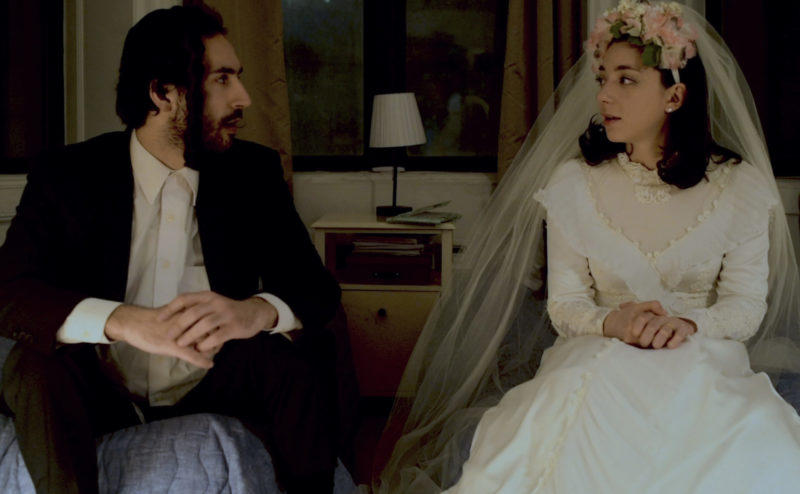 NewEnglandFilm.com talks with Julie Benko about her film The Newlywed’s Guide to Physical Intimacy which screens in the 2020 Online New England Film Festival.

Julie Benko’s short film The Newlywed’s Guide to Physical Intimacy explores the dynamics of Orthodox Jews and sex. She shows what can happen when newlyweds are tasked with consummating their marriages with no sexual education and little understanding of the practicalities of intimacy. Here, Benko discusses the inspiration for the film, which screens at the 2020 Online New England Film Festival.

NewEnglandFilm.com: What is your background in filmmaking?

Julie Benko: I always enjoyed making movies for high school projects, but I never considered writing or directing something as an adult until this past year. I am getting my MFA at NYU Tisch’s Graduate Acting Program, and our curriculum includes a filmmaking workshop. I developed “Newlywed’s Guide” as a project for this class, using three of my actor-classmates to produce, shoot, and act in the project (plus myself as the writer/director/actor and, after the fact, editor). It was an incredible learning experience, and I can’t wait to use my new skills to make more films.

Benko: After graduating from college, I began volunteering as a math tutor at Footsteps, a non-profit social services organization that supports people who wish to leave the Hasidic community and enter into secular society. As I worked to help various women study for their high school equivalency exams, I developed a passion for sharing the stories I heard from these inspiring women.

While doing research for my film, I encountered many shocking stories of sexual assault between married couples that occurred as a direct result of the lack of sex education provided to young people within this (and often any) repressive culture. Eventually, I stumbled upon The Newlywed’s Guide to Physical Intimacy, which was co-written by a male Orthodox rabbi and a female sex therapist to help average young couples within the community grapple with these issues, who often must do so without any guidance from their authority figures or even access to the Internet. After reading the book myself, I was immediately impressed at the authors’ ability to tackle an enormously sensitive issue with tact, grace, respect, and encouragement. I realized that I had found the inspiration for the film I wanted to make.

Benko: As of my writing of this, the film has not yet been shared publicly. However, I was incredibly moved by the response of David Ribner, the rabbi and sex therapist who co-authored the book featured in the film. He said he found the film to be “enchanting, humorous, and respectful.” Then he asked if he could use it as a teaching tool! Since then, the director of a mikveh (Jewish ritual bath and women’s center) in Jerusalem contacted me to ask permission to share it with kallah (marital preparation) instructors who work with future brides. It has been so meaningful to learn that members of the religious community actually think this film could open up a dialogue among people for whom discussions about sexuality are often foreign, intimidating, and shameful. I initially thought of my film as a window for the secular world into the frum (Yiddish for “observant”) one; I hadn’t considered it as a helpful tool for those within the community itself!

Benko: As this was a school project, I had a built-in crew of three classmates and eight hours of shooting time in which to make the magic happen. I cast Felix Teich opposite me as the husband, since he is the only other actor in my program with a Jewish background. Another classmate, Haley Demar Olmstead, had some experience with camera work, so she became my Director of Photography. Once we had wrapped shooting, I enlisted my pianist fiancé Jason Yeager to compose the score. He reached out to his frequent musical collaborator Jason Anick to record the violin parts, which we thought would evoke a modern klezmer feel.

NewEnglandFilm.com: Do you have any advice about how to transition from primarily acting to writing and directing as well?

Benko: I’m brand new to the world of films, so I’m looking to receive advice about all this stuff rather than to dispense any! However, I will offer this regarding my recent (and daunting) leap from actor to actor/writer/director: About a year ago, I made the commitment to write 10 minutes every single day. That has made a world of difference for me, relieving the pressure to finish something too quickly. Instead, it allows me to make a regular practice of firing up my imagination and enjoying wherever the process of writing takes me, rather than trying to force a project to become something it isn’t or stress too much about what the final product “should” look like.

Benko: In the #metoo era, we are constantly talking about what consent looks like. As a woman, I feel a deep and moral imperative to further this conversation in a meaningful way. Within the insular Hasidic Jewish community, very few people are even aware that this conversation is happening at all. People in this world usually grow up without exposure to television or internet, so they often do not even have an awareness of the basic mechanics of sex, let alone the skills to engage in a dialogue about sex-positivity, pleasure, openness, and consent. Sex education for Hasidic youth often takes the form of heavily veiled and roundabout explanations from a parent or other authority figure just before a bride or groom gets married, providing very little helpful information about what to expect or how to handle the (very normal) anxiety that can surround intimate acts.

Add to this the fact that the newlyweds have probably only met two or three times prior to the wedding—and then in the presence of a chaperone—and you have a recipe for an awful lot of fear, trauma, and difficulty surrounding intimacy. And this lack of education is happening right in our backyards! In Brooklyn neighborhoods such as Williamsburg and Borough Park, this is the way of life. My film shines a light on how this orthodox society functions differently than our secular one, and encourages people to find ways to begin the conversation with communities that may get overlooked in an age when the public discourse largely occurs in virtual spheres like Twitter. Until we as a society can find a way to reach marginalized groups such as these, people will continue to suffer.

Benko: I hope that people walk away with a sense that change is possible. The original draft of my film had a good deal in common with the bleak marriage consummation scene from Netflix’s “Unorthodox.” Then, I discovered the book by David Ribner and Jennie Rosenfeld (after which I eventually titled my film). The book is truly fantastic. It’s progressive, respectful, and, best of all, practical. I think it’s a really important and positive contribution to this insular world in which people often feel they must repress urges that they’ve been taught are dirty or shameful. The fact that Dr. Ribner and Dr. Rosenfeld are working so hard to make a concrete positive change for young people in this community inspired me to tell a story that was more optimistic than the original one I’d drafted. I hope that audiences finish my film feeling similarly inspired to keep up that momentum—whether that’s by supporting people from the Hasidic world (perhaps by connecting with education and advocacy organizations like Footsteps or Yaffed), or by addressing similar concerns within their own communities.

Benko: I still have one year left at NYU to complete my MFA in Acting, so I will (hopefully, corona-pending) be taking part in a number of stage productions over the course of the next academic year. I am also currently writing a full-length play set in Storyville, which was the legal red light district that existed in New Orleans during the early 20th century and is often referenced as the birthplace of jazz music. (Jazz is another love of mine; those interested in my musical side can check out my debut album “Introducing Julie Benko,” which is available on all music streaming services.)

Benko: A fun behind-the-scenes tidbit that viewers might enjoy is that I named the rabbi who leaves the card for the newlyweds after my uncle, who is the rabbi at the Reform congregation B’nei Israel in Southbury, CT. He was the rabbi at my bat mitzvah, and will officiate at my wedding next year. Another fun fact: I purchased the dress I wear in the film at a Goodwill about 15 years ago to wear in my high school production of “Cinderella.” The sheer neckline on the dress would be an absolute no-no at a Hasidic wedding, so I pinned a white shirt underneath in order to meet Hasidic modesty standards for the film.

The Newlywed’s Guide to Physical Intimacy screens at the 2020 Online New England Film Festival at NewEnglandFilm.com.