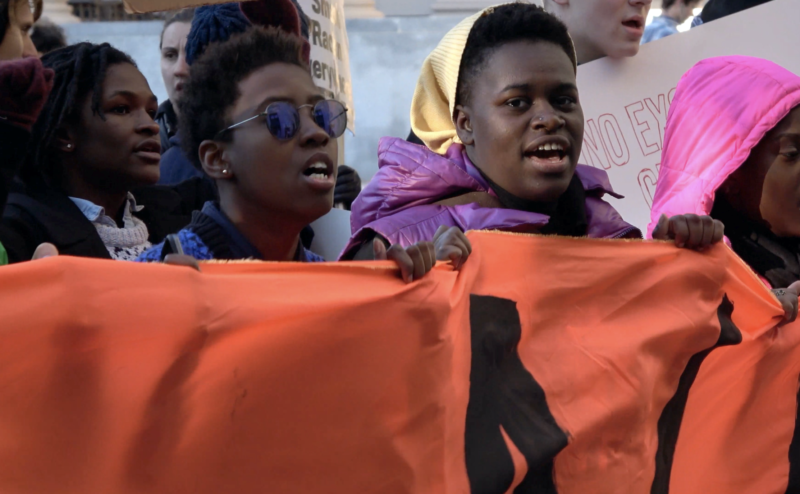 NewEnglandFilm.com talks with Robert Menefee about his film The College FKA Calhoun which screens in the 2020 Online New England Film Festival.

When Robert Menefee was a student at Yale University, he lived at Calhoun College, remarking that he “never liked the racist stained glass windows or the name.” So when local activists began protesting to insist  the college drop the name, Menefee grabbed his camera and went to document the events, as he says, “I discover my film as I shoot it, and then again as I edit it. I don’t plan it out in advance.” The resulting film The College FKA Calhoun screens at the 2020 Online New England Film Festival. Here, Menefee talks about getting his start in filmmaking and more.

Robert Menefee: When I was a child, I made 8mm films and took still photographs. I went to film school in the Army where learned to shoot documentaries with 16mm Arriflex cameras. When I attended Yale, I learned editing on a 16mm Steinbeck Flatbed Editor and also began working in video. After school, I did some commercial work in film, but mostly in video. Now all my work is in video.

Menefee: When I was a student at Yale, I lived at Calhoun College. I never liked the racist stained glass windows or the name. Years later, I was living in New Haven and a friend told me about protests by New Haven activists demanding that Yale change the name of Calhoun College. I joined the protests and began filming.

Menefee: The George Floyd murder, and so many other police murders we have witnessed thanks to cellphone video cameras, have brought to our attention the terrible reality of white supremacy in this country. People are beginning to appreciate that Black lives should matter. The American history we learned in school Is being questioned. Old monuments are being torn down. My film shows how ordinary citizens and activists protested the celebration of slavery and white supremacy at Calhoun College, Yale.

Menefee: Ordinary people have voices too. Elite people would benefit by listening and respecting the regular folk. The celebration of supremacy of one group over another is not harmless.

NewEnglandFilm.com:  What other projects are you working on now?