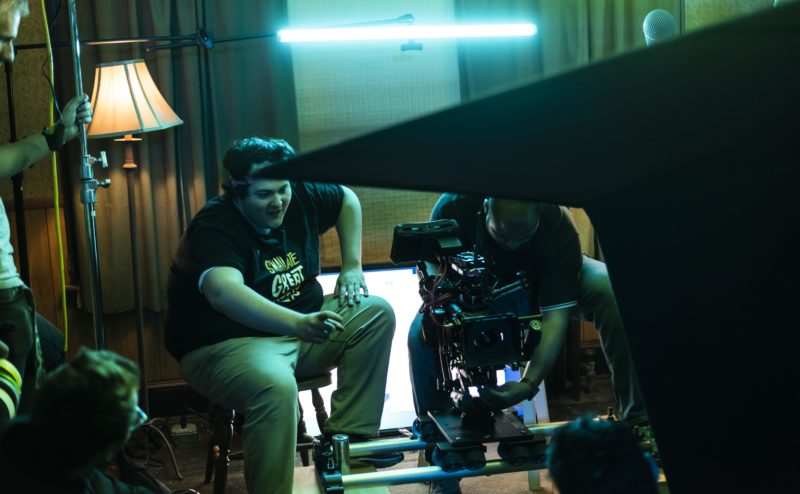 An interview with Hartford based filmmaker, Edward M. Soto, on his latest piece “Sirens: Panic When No One’s Watching”

Sirens: Panic When No One’s Watching shows us a possible projection of life in the year 2024—and it’s not a pretty picture. The film, portraying a young man’s addiction to drugs and social paranoia, screens as part of the 2020 Online New England Film Festival. NewEnglandFilm.com interviewed filmmaker, Edward M.Soto, about his film and the vision of the future he creates for his audience.

t NewEnglandFilm.com: When did you know you wanted to become a filmmaker? And how did you learn to make films?

Edward M. Soto: I knew I wanted to be a filmmaker when I first saw “Bad Lieutenant” by Abel Ferrara; I wanted to know how he was able to get crew, actors, financiers, etc… to commit to a vision/his vision. We all have stories to tell but the hard part is getting the resources and essentially convincing people to trust your vision. I went to film school at Uhart and I had a professor there who would bring me on as a freelancer to a lot of his projects. I started off (and still work as) a gaffer to learn how to light properly, learn the lingo, and network.

Soto: Consumption of news media is at an all-time high; personal bubbles develop and there are some who are in the middle that fear both sides. That is what I wanted to explore. The film also stems from a conversation with my old roommate, who advocated that everyone should get the day off to vote. I do heavily believe voting is important and powerful, but I felt that having the day off would ultimately lead fewer people to vote because they would use the day off to do what they want to do, and voting may not be on the top of that list.

Soto: Everyone that worked on the film I had already worked with before on other sets or is/was a student of mine. I am an adjunct for communication classes at Uhart and I reached out to the Hartt School for actors in order to fill the role of the news anchor.

Soto: I hope people can understand that whichever side, politically, you fall on, we all need to see the bigger picture. That is the betterment of us as a whole; voting matters and we need to take it seriously. Also, we need to hear people out engage in discourse and not arguments.

Soto: Right now, with my business partners we are looking to start a YouTube channel called “Short Story Films,” where we can collaborate with writers or other creatives and develop screenplays that we can produce into short films. Right now Residuum is in the works. We are also writing and looking to produce a video series exploring the locally owned food venues located around the Greater Hartford Area, called Hearths of Hartford.

Soto: Get good catering, crafty, and coffee on set! Work on every set you can, as whatever you can. Think about it, a director should be able to do and understand every crew position on set; you should at least PA in those departments so that you can intelligently and with confidence direct the hard-working and dedicated individuals that trust your vision with the same respect they have for you.

Soto: If you have a story, write it down, tell it to people, and get it made! Thank you to all the cast and crew who worked that LONG day to help me make this film!

Sirens: Panic When No One’s Watching screens at the 2020 Online New England Film Festival at NewEnglandFilm.com.