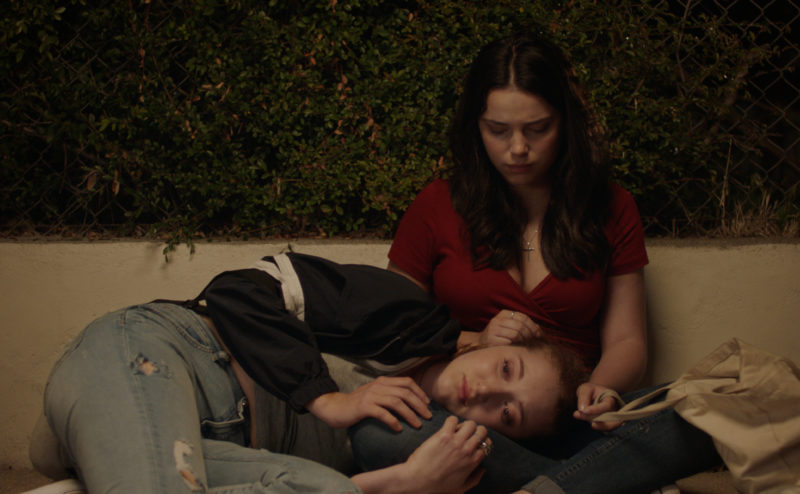 NewEnglandFilm.com talks with Sara Robins about her film “Cranberry Nights” which screens in the 2020 Online New England Film Festival.

Filmmaker Sara Robin navigates the world of an undocumented teen in Los Angeles in her latest film, Cranberry Nights which has its local premiere at the 2020 Online New England Film Festival. Here, she talks about her inspiration as a filmmaker and for the film and her plans to turn it into a feature.

Sara Robin: I decided to become a filmmaker after I got my BA in Politics and Philosophy, and learned that meaningful change doesn’t come from abstract reasoning, but from reaching people’s hearts and minds. I picked up a Canon T2i and taught myself the basics of video production. I made my first short a year later, and at that point, I had fallen in love with filmmaking. I wanted to get better at the technical aspects of production, so I applied to several film schools. In 2013 I moved from Frankfurt (Germany) to Boston, where I did my MFA in Film Production at BU. So in a sense, I’m both self-taught and also attended film school!

Robin: My mother came to Germany in the early ’80s as a refugee from Poland. She endured several years where she was accepted, but not supported. She was able to stay in Germany but didn’t have the right to work or study. I grew up very protected, but her experience opened my eyes to the injustices inherent in our highly selective immigration system.

In the era of depression that followed the 2016 election, I came across Julissa Arce’s autobiography My Underground American Dream. Her story about making it all the way up to VP at Goldman Sachs, all the while she was undocumented, was riveting, groundbreaking, inspirational—one of those stories you read and think “the world will be a better place if everyone reads this.” As I was reading Arce’s book, the new administration didn’t waste any time and got to work to dramatically unravel protections for undocumented immigrants. By the time I finished the book, DACA had been rescinded. I wanted to see a story like Arce’s on the big screen, I wanted it badly! And so I started writing the first draft of Cranberry Nights.

Robin: Unfortunately, Cranberry Nights had just started hitting festivals as COVID started hitting the world. We premiered at the Female Eye Film Festival in Toronto at international Women’s Day, which was such a wonderful kickoff to the festival circuit. But sadly at that point, air travel seemed like a bad idea, and since then many festivals we applied to have been postponed or canceled. So it’s all the more exciting to see Cranberry Nights as part of the Online New England Film Festival in this strange and testing year!

Robin: I spent two days casting in Los Angeles, and got extremely lucky to find such a wonderful cast! The cast was actually what gave me the final push to make the film, even though I had no idea where to get the money for it at the time. I loved everyone on the cast, and I knew the film had to happen one way or another.

In terms of the crew, I filled the key positions with people I knew from previous projects, and it made the whole experience so drama-free and fun! We only had 3 shoot days (well, mostly nights!) but we had become that film-family by the end of it. I couldn’t have asked for a better crew.

I had been wanting to work with DP Casey Stolberg for over two years, and with Cranberry Nights I felt I had a project that suited his style perfectly. We both have what you can call a European sensitivity, and wanted Cranberry Nights to feel organic and natural, without drawing attention to itself.

My line producer Matias had worked with me regularly on commercials, so we already had a great working relationship, and he took all the logistics off my plate which was huge.

The project wouldn’t have been possible without the support of the undocumented community. I spoke to several undocumented filmmakers and youth leaders, and eventually was introduced to Aura who came on board as our associate producer. She helped me cast, fundraise, and handled so much of our relentless PR machine! Being DACA-mented herself, she also kept me in line on the script, and coached the cast, which was truly invaluable, and brought a level of reality to the story that I think you can feel in everybody’s performances.

Robin: I’m developing a feature version of Cranberry Nights together with writer Shirley Miller. I’m also lucky to have several projects in post to get me through the COVID slump, a comedy that I made together with my good friend Izzy Frisoli, who was also our incredible background director & scripty on Cranberry, and a documentary about climbing Tanzania’s second highest peak in a wheelchair (yes, that’s a real thing!)

Robin: I created Cranberry Nights to show that undocumented immigrants are not “other” – they are Americans, community members who pay taxes, human beings like you and I. Not as the president will have it, “animals”. As with many groups in society, we have ingrained ideas in our head of what they are like, but prejudice only serves to keep us apart, create fear, and keep us in check. By showing Juana, presumably a regular American teen, navigate classic coming of age challenges, and learning only later that she is in fact undocumented, Cranberry Nights reminds us that we are more alike than we think.

Robin: The advice question is a daunting one, you know! You want to be helpful, but there’s almost no escaping platitudes when you direct advice at a general audience.

In my experience, the most helpful advice has often been some very concrete advice. Things like “don’t shoot handheld with a small camera on a 100mm lens”. But I think as far as general advice goes, make a film about something you care about. Whether it’s a topic, a person, a setting, a specific visual style—you need to love that thing, because that’s the energy you’ll work from when shit hits the fan, as it invariably will. It’s also the energy that gets people excited about your project, and that will attract the right people to your project. I spent a long time researching and writing and rewriting Cranberry Nights, and it paid off because in the end I knew what I was talking about and why. I came to appreciate it on a whole new level, and that’s ultimately what gave the film its heart and soul.

Robin: Maybe a concluding thought—I think we are at an interesting moment, where we are kept apart more than before. I see a real danger in that, the idea that we can just shift our lives online, stay put in our countries, and avoid other human beings.

So much of what my filmmaking is about is the opposite of that, and I think a lot of artists feel that way. To me, this time calls upon all of us to make an extra effort, learn how to be there for each other, be fully present, even from a distance. I think this moment has the power to remind us why we’re here, what we truly value in our lives. So even though there’s the danger of separation, loneliness, and fear, it’s also a huge opportunity to transcend the individualist prison of frantic self-fulfillment, and take time to reconnect—with ourselves, our purpose, and the people we love.

As filmmakers, storytellers, artists we can be a big part of that. To me, it’s about having the guts to ask (sometimes confronting) big picture questions: What am I saying with this project? Why does it matter? What is it that I really care about here? If we do that more often, we’ll see better stories on our screens. And I think now more than ever, we really, really need that!