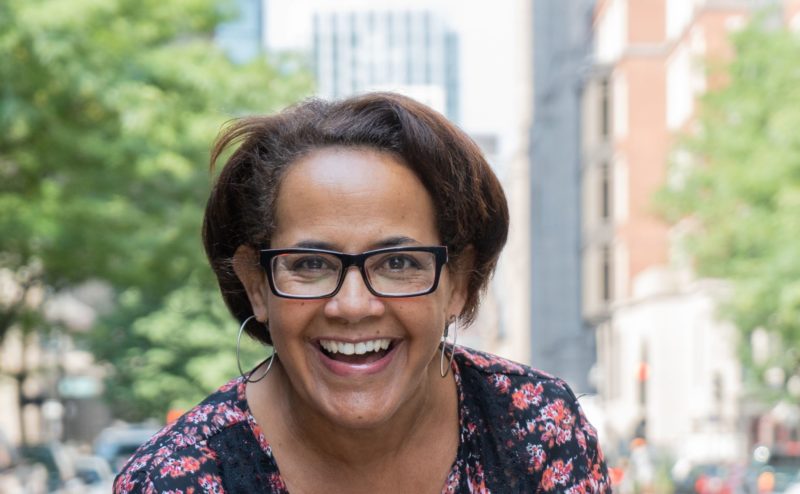 Lisa Simmons, Director and curator of the Roxbury International Film Festival (RoxFilm), now in its 21st year, and Director of the Color of Film Collaborative, is one of the speakers at the Women in Film / Video New England Annual Meeting.

Women in Film / Video New England hosts its annual meeting Wednesday October 2 at WGBH. NewEnglandFilm.com Founder Michele Meek will be the keynote speaker, and she will announce the winner for the New England Film Star Award. Learn more and get tickets.

The Emerge Film Festival runs October 2–5 in Lewiston and Auburn, Maine. The festival celebrates films made in Maine and beyond. For tickets and a festival schedule, visit emergefilmfestival.org.

The 35th annual Joey O’Donnell Film Premiere will be held on October 27 in Massachusetts. The event includes a reception at 6:30 pm at the Natick Mall, followed by a movie premiere screening at 8:30 pm at AMC Framingham; film title TBA. Proceeds benefit the Joey Fund/Cystic Fibrosis Foundation. Buy tickets and learn more here.

Women in Film and Video of New England present a Production Assistant Workshop on October 4 from 4–6 pm in Mystic, Connecticut. The event will be held at the Mystic Noank Library. Learn more and register here.

Harvard Book Store presents an evening with Jodi Kantor, Megan Twohey, and Ashley Judd at the First Parish Church in Cambridge on October 7 at 7:00 pm. They will discuss Kantor and Twohey’s new book She Said, which chronicles their investigation of Hollywood producer Harvey Weinstein. For tickets and more information, click here.

Celebrate the spooky at the Flickers’ Vortex Sci-Fi, Fantasy, and Horror Film Festival October 19–27 in Rhode Island. Check out screenings, a walking tour, and more. Read more at the festival website.

TCAN Center for the Arts in Natick, Massachusetts hosts a midnight showing of Rocky Horror Picture Show on October 19. Costumes are encouraged at this audience participation screening. Tickets $12, $10 for members. Learn more here.

The 2019 Media Resource Expo will be held at the DoubleTree by Hilton in Westborough, Massachusetts on October 1 from 10–4. This regional expo will highlight film, broadcast, instructional media, and communication. Register and learn more here.

The feature comedy Love, Weddings & Other Disasters has been filming in Massachusetts. The film is directed by Dennis Dugan and stars Diane Keaton and Jeremy Irons. Read more from Boston.com.

The finalists for the New England Film Star Award were announced—all of them will be highlighted at the Women in Film / Video New England Annual Meeting on October 2.

Cheryl Eagan-Donovan’s documentary Nothing is Truer Than the Truth is available now on Hulu and Amazon Prime. The film looks at the process of writing, where life experience, imitation of the masters, and relentless revision come together to create genius, as the key to discovering Edward de Vere as the true author of the works attributed to William Shakespeare. Read an interview with Eagan-Donovan in a past issue of NewEnglandFilm.com.

Writer/Director Mary C. Ferrara started production on her film, Wallie’s Gals, about a group of women who reunite 30 years after working in a discount clothing store together. Release will be in 2020.

Massachusetts’s Coolidge Corner Theatre hosts “Open Screen” open mic night on October 15. Filmmakers are encouraged to sign up to show their films of under 10 minutes. Signup at 7:00 pm; show begins at 7:30 pm. Learn more at the Coolidge website.

The Massachusetts Cultural Council is currently accepting Local Cultural Council grants in the arts, sciences, and humanities. The deadline to apply is October 15. Find your local council and more information here.