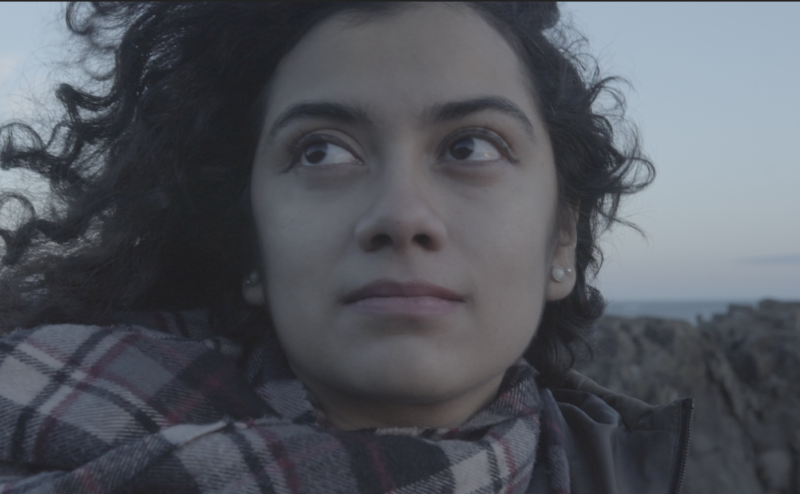 Hyphen delves into a Boston artist's experience of "living in the hyphen" of identity.

We talked with filmmaker Maria Servellón about Hyphen, a poetic journey that examines identity and culture in Boston.

Maria Servellón’s short film Hyphen is a poetic journey of memory and fantasy told through the eyes of four versions of an artist as she creates her own identity.

Filmmaker Servellón opened up about creating a film to highlight the experience of “living in the hyphen” of identity in Boston.

Maria Servellón: For my quinceañera (15th birthday party), my dad gave me a Sony Handycam as a gift and told me to go create something with it. And I never stopped. I created solo music videos, short films, vlogs, and experimental pieces thereafter, all the way into Emerson College for graduate school. My mission was to create bigger and more ambitious projects, and find the friends who would be right there with me. I look forward to the continued evolution of my work.

NewEnglandFilm.com: What was the inspiration for your film?

Servellón: I was inspired to create Hyphen realizing the dire necessity for more women of color behind and in front of the camera. As storytellers, we are responsible for telling the invisible but inspirational narratives. Themes of identity, self-discovery, perseverance, hope, and creativity exist from the inspirational Bostonians in my life, their stories not that different from my own. The film is a love letter to these stories located in every nook of this city.

NewEnglandFilm.com: How did you find your cast and crew?

Servellón: The crew came together after we shared stories about times we felt like we were “living in the hyphen” of trying to create one identity out of many. Our different connections turned into collective excitement. The cast came together after a personal casting call I oversaw. Seeing these talented actors and non-actors alike onscreen was surreal. I’m happy they each made the story their own.

Servellón: I am in the concept mode for my next short film, Phantasma. I am letting the story come to me as it feels right, ready to receive it with open arms when it arrives.

NewEnglandFilm.com: What advice to you have to share with other filmmakers?

Servellón: Create the films you or others have needed for a long time. Tell the hardest stories. Naturally, the right crew and cast will come together to support your vision. It won’t be easy, but it will certainly be worth it.

Hyphen is streaming now through October 14 as part of the 2019 Online New England Film Festival. You can also follow the film at hyphenmovie.com.