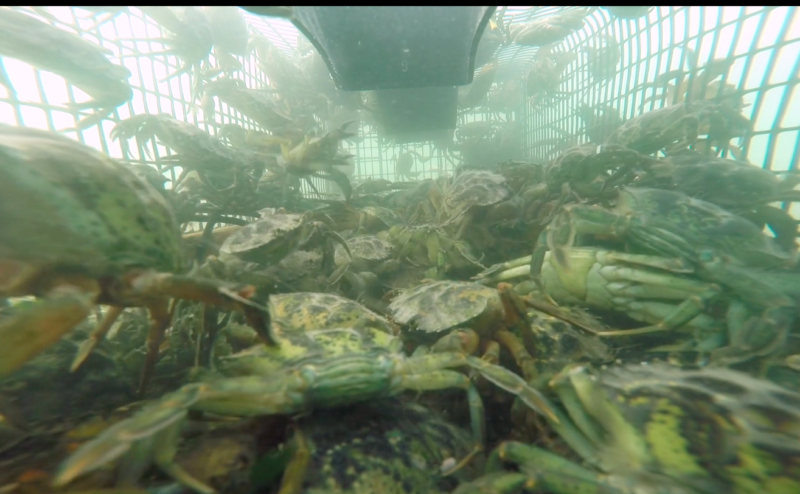 A conversation with Filmmaker Nubar Alexanian about his documentary Recipe For Disaster: Green Crabs In The Great Marsh, which is now streaming as part of the 2019 Online New England Film Festival

In this age of the Anthropocene, we are called upon as humans to observe and reflect on our role in the earth’s environment. What can we do to help preserve the ecosystem around us? One solution, and a savory one for seafood lovers, is to help out by eating more green crabs. Nubar Alexanian covers the impact of the invasive species on the New England coast, interviewing marine educators, shellfish constables, etc., as well as shooting the process of trapping the crabs from sea to land.

Originally screened at the Salem Film Festival, Recipe For Disaster: Green Crabs In The Great Marsh is now streaming through October 15 as part of the 2019 Online New England Film Festival. We caught up with Nubar about the production and post-development processes of making the film, as well as how he is using the platform of documentary to motivate viewers to not just care but to take tangible action.

NewEnglandFilm.com: How did you become a filmmaker?

Nubar Alexanian: I came up as a photojournalist producing photo essays for major magazines in the U.S. and Europe. I also did some shooting for commercial clients. One of them ask me to make a short film and I ended up making quite a few other films for them including a one hour documentary on flamenco music and dance in Spain. I am mostly self taught although I learned a great deal from a 20 year collaboration as a still photographer with Errol Morris.

NewEnglandFilm.com:What inspired you to make your film?

Alexanian: For more than four decades I’ve been living along the Great Marsh in Massachusetts and I’ve come to know and love it as both a fisherman and a photographer. I was shocked in June 2017 when I found out that invasive green crabs were decimating this profound and delicate ecosystem, and dismayed to discover that very few people knew about it. Making this film is my attempt to bring attention to this critical issue by creating a narrative experience of what’s actually going on – not just in my back yard, but along both coasts of North America and beyond.”

Alexanian: Six months ago we did a screening of an earlier version of the film in Gloucester to a packed audience. And during the Q&A I thought a huge fight was going to break out in the audience about what is actually happening with the crabs and why. It was very interesting.

Alexanian: My daughter and I have been working on a feature length documentary film since 2011 currently called Scars of Silence: Three Generations From Genocide, about the effects of the Armenian Genocide on our family. LogLine: An Armenian-American father and daughter set out to understand the powerful legacy of genocide and the ways that a century of silence and denial has shaped their family and themselves. When your family’s brutal past is denied, how do you make sense of the present?

Alexanian: Raising money is the hardest thing about making a documentary film. You have to really want to make the film to be successful.

NE Film: Anything else you want to share that might be of interest to our readers — about you, your work…

Alexanian also loves making short docs for non-profit organizations—see some of those at www.walkercreekmedia.com.