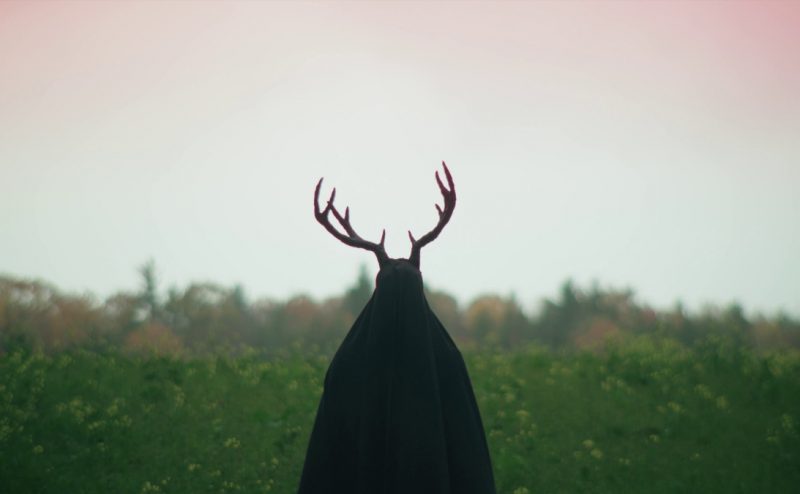 Elysia is Noah LePage’s pensive and experimental look at life after death and all its strange knowledge and comforts.

During the opening sequence of Elysia, we see the main character being freed from a coffin baring the film’s title and her name.  She’s freed by a man with a power drill and wooden mask who in any other film, might be some menacing villain or hack-n-slash murder. Instead, they embrace as old friends would and express how much they miss each other.

Experimental, pensive and carefully paced, this first scene is an excellent introduction to the gorgeous surrealism and heart the film serves up so well. Elysia is completely set in the dreamy afterlife of the main character. We follow as she convenes with the postmortem versions of people she’s encountered in her old life and reckons with her new world.

Elysia is now streaming through October 15 as part of the 2018 Online New England Film Festival. We caught up with Noah LePage, the film’s writer and director, to lear more about this unique work and get a few tips about what to expect when early in your filmmaking career.

LePage: I knew I wanted to make movies as soon as puberty made me too shy to actually be in front of a camera. It was either movies or the monastery. I started making short films when I was fourteen in the woods behind my house in Maine (the same woods where we filmed Elysia eight years later), and I kept it up through the rest of high school before enrolling in the undergraduate film program at NYU. While film schools, workshops, and courses can provide a valuable structure and support system, everything that I’ve learned about filmmaking has come from making films and being exposed to the actual production process, and every filmmaker I’ve met has said the same thing.

LePage: Elysia was my undergraduate thesis film at NYU, so it was inspired at least a little bit by class requirements…but it was truly inspired by recent close deaths in my family. I thought about the effect these kinds of events have on our memories, how places and events of our past stop being experiences and instead become memorials to those we have lost. I imagined an afterlife that wasn’t an unknown paradise but was a loop of memory and fantasy cobbled together by our unconscious, just like dreams. Elysia was an attempt to explore and evoke this kind of world, and maybe find a way to explain the dark spaces that death leaves in our lives.

LePage: Every member of this film’s incredibly talented crew is a close friend I have met through my time at NYU, and just like me they’re all undergraduate young’uns. They were the greatest collaborators I could have asked for, and this film wouldn’t exist without them. Most of the film’s wonderful supporting cast was found through open auditions in New York City, while our lead actress Elysia Roorbach and the actors playing her parents, Robin Lisherness and Juliet Karelsen (Elysia’s real-life mother), are Maine locals. I acted in plays with Elysia when we were both growing up in Farmington, Maine, and Robin often directed us in community theater shows. It was the first time Elysia, Robin, and Juliet had ever acted in a film, and they blew us all away. But keep an eye out for Elysia, in particular. If you can count on anyone to have a bright future in this industry, it’s her.

LePage: I’m directing a 16mm short later this month in New York, and then I’m off to France in September to shoot a comedy short.

LePage: Making a movie is an often expensive and always painstaking process, but when it comes to finishing and sharing our work, us young filmmakers are notorious for getting cold feet. We often feel like we don’t want to bother others with our work, that it didn’t live up to our initial expectations and is sure to disappoint others. But that’s not true, and I’m going to shout my advice in all-caps: ALWAYS FINISH YOUR WORK AND NEVER BE ASHAMED OF IT. Never be afraid to express how much your film means to you when sending it out to festivals and releasing it online; if you dedicated months of your life to it, you deserve to finish it and give it a proper platform.

LePage: I still don’t know what I’m doing! Thanks for reading!