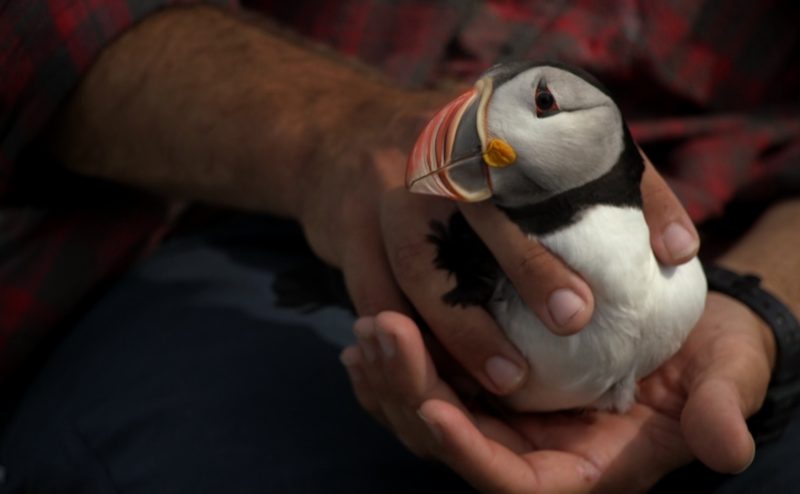 One of the Project Puffin scientists holds a Puffin from Eastern Egg Rock who's just recently been tagged.

Project Puffin profiles the efforts of conservationists working on the coast of Maine to study, protect and nurture the United States’ only colony of puffins. In this interview with NewEnglandFilm.com, Vanessa Kahn, one of the writers and directors of Project Puffin, discusses how she got into filmmaking, where she’s headed, and, surprisingly, what the puffins taught her about filmmaking.

Did you know the only colony of Puffins (an arctic seabird that looks like a miniature mix of a penguin and a Porg) in the United States lives on the coast of Maine? A team of young scientists is on the island of Eastern Egg Rock right now studying these birds and their changing climate. The work being done by these researchers for Project Puffin is the subject  of Vanessa Kahn and Kylee Acevedo’s short documentary of the same name.

This film has a mission beyond showcasing beautiful shots of adorable birds and painterly Maine coastlines. Kahn and Acevedo are conservationists at heart and are sure that viewers, through interviews with the Project Puffin scientists, reckon with the bird’s changing climate and uncertain future.

Originally screened at the Salem Film Festival,  Independent Film Festival Boston, and FSU’s Visions: Honors Exhibition, Project Puffin is now streaming through October 15 as part of the 2018 Online New England Film Festival. We caught up with Vanessa Kahn about how she got into filmmaking, where she’s headed, and, surprisingly, what the puffins taught her about filmmaking.

Kahn: I think I was just born to be a filmmaker. I started running around in my backyard with a camcorder when I was in preschool, and the only thing that’s changed since then is that the camcorders are now a lot smaller! I initially learned by just doing it. In middle school, I would use my friends as actors as make videos at every chance I could get and then spend countless hours learning the many features of Windows Movie Maker (now all obsolete knowledge, but a good start for me.) My formal education started at Fitchburg State University, where I majored in Communications Media with a concentration in Film/Video Production.

Kahn: I’ve always been passionate about wildlife, and puffins had a very special place in my heart since the first time I saw them at an aquarium when I was a little girl. I had been an avid follower of Project Puffin, the seabird restoration program in Maine run by Dr. Steven Kress and the National Audubon Society, and I wanted to share my excitement for this species with all who would listen. Many people in New England don’t realize that the only colony of Atlantic Puffins in the country is right up the coast, and what better way to tell them than through film. Just as Dr. Kress and the Audubon Society have been trying to convey since the advent of their project, I wanted to bring attention to these wonderful little birds and tell people that they weren’t always here because of mass extinction and that they may not be here forever if we continue to contribute to climate change.

NE Film: Where has the film been shown (festivals, other screenings, etc.)? Talk about a memorable experience with an audience.

Kahn: The film was shown at the Salem Film Festival, Independent Film Festival Boston, and FSU’s Visions: Honors Exhibition. Each time this film screened was a memorable experience because it meant so much to me that the goal that Kylee and I set out to achieve (the goal to spread the word about Atlantic Puffins and conservation) was being realized.

Kahn: Kylee Acevedo, one of my best friends at FSU, and I basically went through all of our documentary film classes together and knew we would be making Project Puffin together. This film is as much hers as it is mine. We enlisted the help of one other person in our class and all it took was a three-person crew to do it all.

NE Film: What film(s) are you working on now?

Kahn: I am currently interning at the Smithsonian National Zoo in Washington, D.C., so I am mainly just working on content for them and their organization. I’m getting a lot of experience in wildlife documentary and I’m learning a lot about conservation science.

Kahn: I think the puffins actually taught me the most valuable lesson in filmmaking; patience. Filmmaking as a whole takes patience. Not just patience to wait around for a wild bird to land in just the right spot and preform just the right acts, but patience to work on good ideas, and spend time researching equipment, or actors, or whatever you may need to make a good film. It takes so much time to learn and for your taste evolve. I am just starting to understand this and I am prepared to be patient for what films lay ahead in my future.