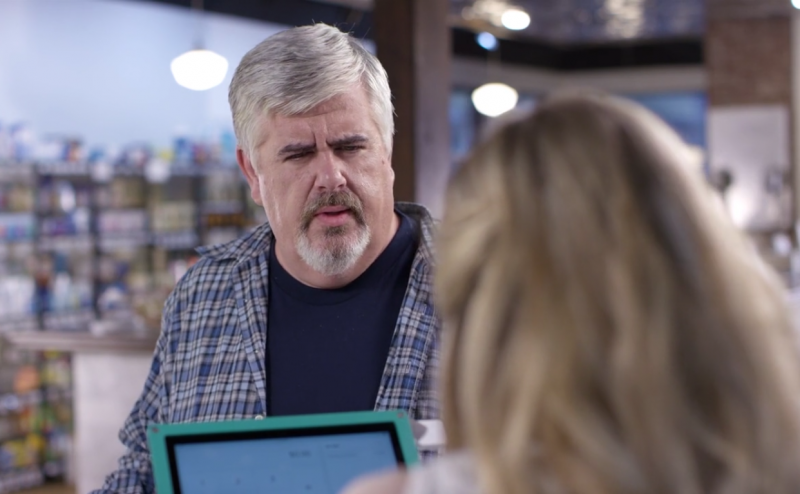 What does her name tag say?

Anthony Ambrosino’s pithy meditation on language, usage and how we all combat border at a minimum wage job will make you laugh, cautiously.

Almost immediately, Anthony Ambrosino’s short comedy Nobel Prize takes a strange yet thought-provoking turn. Without giving too much away, let’s just say this cashier does not have an ordinary name, and the other character in film does not know how to navigate the situation or the explanation given for her unusual name.

Originally screened at the Rhode Island International Film Festival and at the Shawna Shea Film Festival, Nobel Prize is now streaming through October 15 as part of the 2018 Online New England Film Festival. We caught up with Anthony Ambrosino about how he got into filmmaking, what inspired him to make this film, and the right way to treat your crew, regardless of their role in your film.

Anthony Ambrosino: I never knew I wanted to be a filmmaker. I just always had a camera on my shoulder and loved entertaining or telling stories. I started making films for myself and for friends. Short stories, skits, music videos whatever we found fun in the moment. This eventually led to being asked to work on projects being done by others and being hired onto professional shoots. It all just sort of happened. I’ve been a full time part of this circus since 2006.

Ambrosino: I was first introduced to Nobel Prize when I put out a call for short film scripts to some local writers I respect. I had been a part of a women in film symposium put on by our nonprofit, the Rhode Island Film Collaborative, and was challenged by some of the industry statistics such as only 30.8% of speaking roles are women. I decided that the next project I directed would have a female lead and made it a requirement for the scripts I was considering. I didn’t want a cliche damsel in distress, a macho girl or someone overly sexual. I wanted an intelligent character that dealt in something other than sex and violence. I’ve heard words described as bullets or seeds and here we have our character take a word that is 99% of the time a bullet used against women and turn it into a seed of thought for the man at her counter. What is her motive? I think that’s for our hero to know and for our audience to decide for themselves.

Ambrosino: My crew consisted of friends and colleagues that I’d met or worked with throughout my career. They made my dream of getting back in the director’s chair possible. I can’t thank my producer Erin enough. She willed this project into existence.

Ambrosino: I’ve been producing over the last few years and the projects are all coming together. Painless hits select theaters on 9/21 and VOD/DVD in October, The Wrong Todd is having its world premiere at the LA Film Festival on 9/24 and Alice Fades Away will be wrapping production on 9/11. Aside from those, I have a few projects in development.

Ambrosino: Make films you are passionate about; be it your own film or someone else’s work. Help others succeed by giving them the same energy you’d give your own project. Never underestimate what having good friends can carry you through. Respect your cast and crew regardless of their position on the project from production assistants to producers from stars to extras, everyone is there for the same purpose and bringing their skills and work ethic to the table.

NewEnglandFilm.com: Anything else you want to share that might be of interest to our readers—about you, your work?

Ambrosino: Please check out the RIFC which is a community in Rhode Island that celebrates working together to help realize people’s visions and help them bring their projects to the screen.