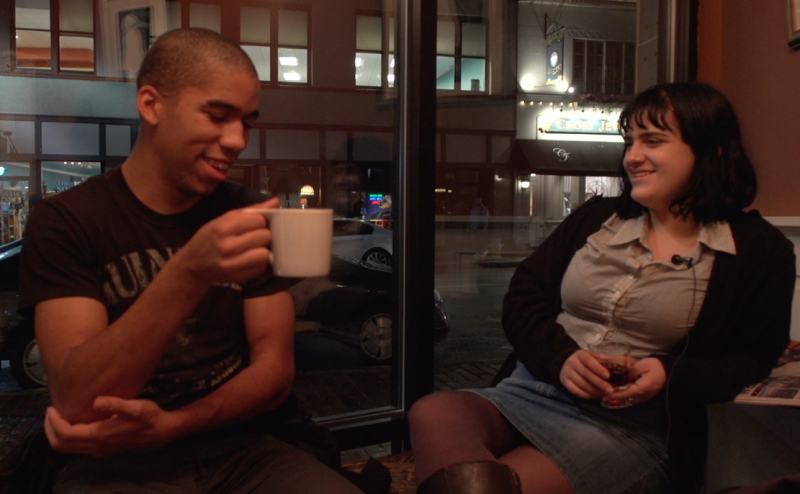 It’s a Match follows Evelyn, a Portland Maine native, as she peruses Tinder and goes on some semi-successful IRL dates.

Generally speaking, much of the stigma associated with online dating has decreased over the last five years. In addition, cyberspace is the most common place couples claim to have met their new spouse. But even with declining stigma and frequency of use, it’s difficult to know what to expect when trying online dating.  There’s not much to prepare a user for the diverse and often mixed experiences of individuals trying to land to land a date using a dating app. Sarah Ford’s film It’s a Match! seeks to unpack this mystery a bit by following Portland Maine native Evelyn as she peruses Tinder and embarks on a few IRL dates.

First screened at Maine Mayhem in Portland, Maine, Sanford International Film Festival in Sanford NH and a few others, It’s a Match is now streaming online during the 10th Annual Online New England Film Festival. We caught up with Sarah Ford about how she got her start in filmmaking and whether or not she uses Tinder.

Ford: I’ve known I wanted to make movies since I was 14 and edited movies starring my family on iMovie. They weren’t good at all but they helped me realize a love for telling stories. It took a change of major, but I eventually ended up in the communications program at Southern Maine Community College in South Portland! Going to school helped me hone my skills and figure out which aspects of production I excel at.

Ford: A lot of my friends at the time were dating using apps, specifically Tinder. I’ve never used the app personally and I thought it would be fun to see what it was like from an outside perspective. I wanted to see and show how online dating is different and still similar to traditional dating.

It’s a Match was shown at Maine Mayhem in Portland, Maine, Sanford International Film Festival in Sanford NH, and a few other smaller festivals, including an underground festival in Hamburg, Germany! Honestly the most memorable showing for me was the first time we showed it to other people in a class in school. I had pulled multiple all-nighters editing and sifting through the 20+ hours of footage and I was really nervous about how people would respond. All those hours paid off thought because reception for the film was incredibly positive and it pushed me to enter it into festivals.

Ford: Documentaries may seem very intimidating because you usually don’t have a script to work off of; but it can also be incredibly freeing, knowing you’re in charge of this story that’s happening on the fly.