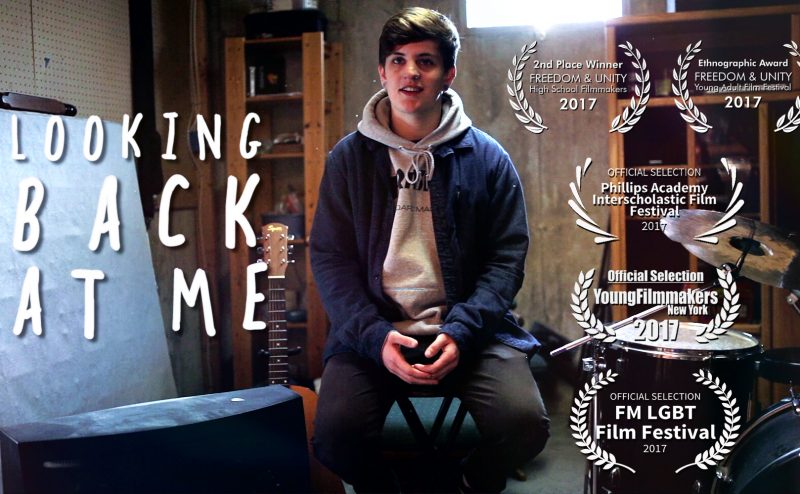 2018 Festival Interview: Looking Back at Me

In this short documentary, Alex Escajac tells the story of Sade Bolger, an 18-year-old musician from Vermont who recently came out as non-binary,

The breakout hit Tangerine  in 2015, the recent popularity of the television show Pose, and other media featuring honest depictions of queer lives shows that queer identity is having an extended moment on screen right now. However, filmmakers like Alex Escaja and other members of the LGBTQIA* community know the importance of continuing to tell the stories of gender nonconforming people, queer people and all other people across the LGBTQIA spectrum. They know that the real lives of LGBTQIA people are embattled, complex, and still worth examining.

Escja’s film adds a valuable perspective to this cultural moment that is often left out or misrepresented; the voice and inner life of someone who identifies as non-binary.

Originally screened at the Vermont International Film Festival and many others, Looking Back at Me is now streaming through October 15 as part of the 2018 Online New England Film Festival. We caught up with Alex Escaja to learn more about how they got into filmmaking and what they plan to do with the rest of their sure-to-be lengthy film career.

Escaja: I’ve always found movies to be not only a source of entertainment, but also a powerful platform for social change. My interest in film intersects with my interest in activism. Films, whether they’re fictional or documentaries, are a perfect medium to bring forth topics and lives that the viewers may have never experienced or understood before. This can create important dialogue, fostering empathy and awareness. Additionally, they can be important places to find validation and empowerment. When films reflect one’s own experience, it creates a sense of belonging. In this way, films have made me feel comforted, inspired, and seen. Representation in media is what allowed me to accept and celebrate my authentic self at a young age. I knew then that I wanted to make films one day that convey messages of social change, and could provide a microphone and mirror for underrepresented populations, just as it once had for me.

I will be majoring in Film and Television Studies at the University of Vermont this fall as an incoming first-year student. Prior to this, I was a self-taught filmmaker during my four years in high school. I also utilized the resources of Vermont Community Access Media (VCAM) where I took workshops and accessed equipment.

Escaja: As a member of the LGBTQ community, I too often see myself misrepresented in film and media. Even in everyday conversation, when the legal and social status of the LGBTQ community is discussed, few connect these political issues to the realities and experiences of real-life human beings. In 2017, I was a Junior in high school, and sought to develop my film portfolio for college. The year prior I had won a local film contest with my film “Young and Queer Vermont”, and despite being honored to have received that prize, I just wasn’t satisfied with my product. I felt it only scratched the surface of the message I wanted to convey in a film about queer Vermont youth. The following year, I wanted to continue expanding my experience with filmmaking, so I attempt to produce my first narrative short film, which led me Sade and the film “Looking Back at Me”

Escaja: Looking Back at Me” has been screened at the Fargo-Minnesota LGBT Film Festival, Young Filmmakers Festival in New York City, and the Vermont International Film Festival. It has won Best Ethnographic Film Award at the Freedom & Unity Film Contest and Audience Choice Award at the Phillips Academy Film Festival. Additionally, the film has been shown at schools, conferences, workplaces, and universities for entertainment and educational purposes. Sade and I have also toured the state presenting the film and sitting as panelists for audience engagement. We serve as a resource to answer questions on the making of the film and on LGBTQ allyship, sharing our own stories and experiences.

Escaja: I produced, filmed, and edited “Looking Back at Me” entirely on my own as a Junior in high school. Sade and I had gone to the same school, so I had that connection with him. When I brainstormed the theme of the film, I immediately knew Sade would be a perfect candidate, and we collaborated together to tell his story.

Escaja: Honestly, I’m the one who needs advice on these things! I am still very new to the world of filmmaking. In terms of festivals, I would say – don’t wait for opportunities to come to you, find the opportunities yourself! Use your resources and make connections. Step outside your comfort zone.