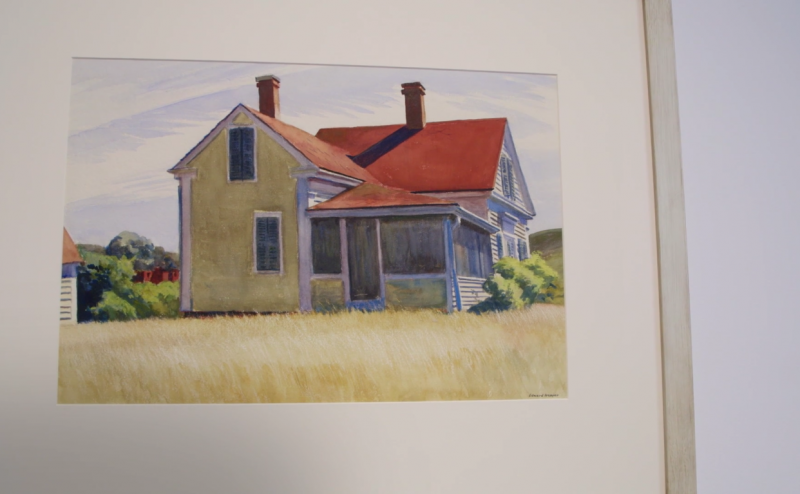 Bob Burnett captures the perspectives of curators and five generations of Marshalls in his loving and curious look at Edward Hopper’s famous painting.

Undoubtedly, Marshall’s House is a gorgeous watercolor painting. Edward Hopper truly captures the “disticnt and beautiful” light unique to the South Toro in Cape Cod Massachusetts as it strikes the Marshall Family home at the perfect time of day.

It’s five generations of the Marshall family members and a select few curators who Bob Burnett features to lend their perspective on this elegant painting and the home depicted on the canvas throughout. Cleverly, Burnett never shows the face of any person we hear commenting on the house in this short documentary. Instead, we get steady, dreamy shots of the modestly beautiful home, the immaculate painting and aged photos of Hopper and the Marshall Family.

Originally screened at the  Provincetown Film Festival and soon to be shown at the Wood’s Hole Film Festival, Edward Hopper & Marshall’s House is now streaming through October 15 as part of the 2018 Online New England Film Festival. Bob Burnett shared with us how he found the Marshal House, how he got into filmmaking, and where you might see his film next in New England.

Burnett: I was originally an audio recording person thinking I would work in a recording studio or radio station. I never went to film school. Upon graduation from college in 1983, I realized I’d be more employable if I knew how to be a camera-person. I did so via community access TV volunteering and parlayed that into enough experience to start working in Washington, DC-based international news and documentary work–which I’ve been doing in one form or another ever since.

Burnett: “Marshall’s House” in Truro is owned by my friends John and Susan Marshall. I discovered through them that Edward Hopper had painted a watercolor of the house in 1932. While visiting the house in the fall of 2015, my wife and I took a Hopper House Tour with local historian, Beth Chapman. I became very interested in the decades-long relationship the Hoppers had with the Truro region.

NewEnglandFilm: Where has the film been shown (festivals, other screenings, etc.)? Talk about a memorable experience with an audience.

Burnette: The film has been shown in several festivals: the Provincetown Film Festival and will soon be shown at the Wood’s Hole Festival. Also– the Northern Virginia Film Festival, DC Capitol Hill Classic and will also show this summer at DC shorts Festival and the Film Festival of Columbus (Ohio). I’ve had very nice receptions at the screenings I’ve attended. My favorite reactions have been from the Marshall family. Family members have shared with me the film has rekindled a connection with the house.

Burnett: I shot this by myself, did the initial editing and then pursued funding so that i could take the editing up a notch with a decent editor (Jay Salbert) , sound designer/composer (AF Jones) and other compositions by Michael Vincent Waller. Funding also went towards rights and film festivals (thanks to the Kogod Family Foundation for the funding.)

NewEnglanfFilm: What film(s) are you working on now?

Burnette: I’m working on a film that’s centered on Burning Man in the Black Rock Desert from a perspective of how an arts-based city is built and brought down without an environmental impact in a matter of weeks.

Burnett: I worked for 30+ years for clients on specifically funded projects. This is my first truly independent production and it’s made me want to do nothing else but pursue independent projects.

NewEnglandFilm.com: Anything else you want to share that might be of interest to our readers—about you, your work?

Burnett: The Wadsworth Atheneum Museum in Hartford, Connecticutt is the museum where “Marshall’s House” is home. They’ve recently informed me they want to do a watercolor retrospective, feature the painting, and figure out how best to include my film in the exhibit. I look forward to that happening!