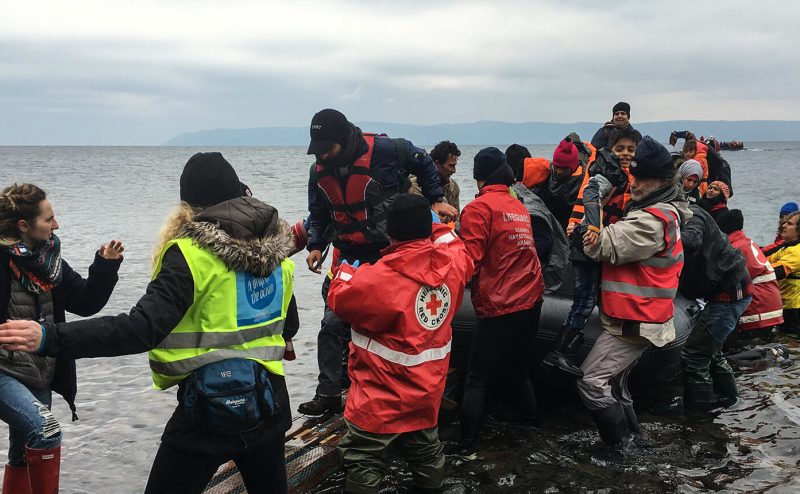 A still from Human Flow, a documentary playing at The Mountaintop Film Festival this month.

The Banff Mountain Film Festival World Tour visits Vermont this month. Selected films will screen at Skirack in Burlington on January 25 and 26. Visit the festival website for more information and other dates.

The Brattle Theatre presents “(Some of) The Best of 2017” January 7-18. Screenings include Dunkirk, Wonder Woman, Columbus, Lady Macbeth, and Get Out. For showtimes, check out the Brattle calendar.

Portsmouth’s Music Hall kicks off a new series of their Film Club this month with the theme “Know the Score.” Through June, check out films with acclaimed musical scores. In January, catch a screening of North by Northwest on January 16 at 7 pm. For more information about Film Club screenings, visit the Music Hall site.

In other awards season news, the Golden Globes aired on January 7. The Oscar nominations will be announced on January 23.

Rule Boston Camera is moving this month. The company’s new location will be in a historical brick mill building at 320 Nevada Street in Newton. Read more on their website.

The documentary short The Collection, directed by Adam Roffman, is available at Vimeo. The short premiered at last year’s SXSW Film Festival and also screened at the recent Mass Media Expo.

The Salem Film Fest’s Mass Reality Check is now open for submissions. College students and recent graduates are encouraged to submit documentary and experimental documentary short films. The submission deadline is February 23. For official guidelines on who is eligible to apply and more information on benefits the festival can provide filmmakers, click here.

The Connecticut LGBT Film Festival is currently accepting submissions. The early bird deadline is January 15, and the regular deadline is March 1. This year’s festival will take place in June. Learn more here.

The deadline for LEF New England’s Moving Image Fund grant is approaching. Production and post-production letters of inquiry are due by January 26. Learn more at the LEF Fund.

Submit now to the Nantucket Film Festival. The late deadline is January 15, and Withoutabox is extended depending on categories either February 16 or March 12. Learn more here.