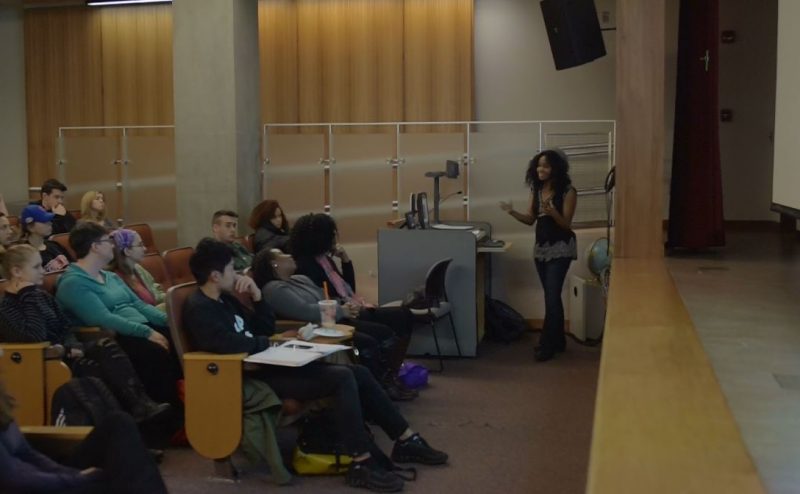 Raeshelle Cooke having the kind of conversation with students that she hopes her film Wrath City will start.

Be What You Talk About

An Interview with Raeshelle Cooke, Writer and Director of Wrath City.

Suzy Cosgrove interviews writer/director Raeshelle Cooke about her film Wrath City, about what inspired her to make it, and about the conversations she is hoping it will start.

Filmmaker Raeshelle Cooke’s narrative short Wrath City tells the poignant tale of a woman faced with deportation, exerting her right to speak her truth, and to be heard. Through this woman’s experience, Cooke comments on the Black Lives Matter movement and police brutality, by splashing cold water on the faces of the ignorant, and calling for viewers who normally speak up about other issues to be equally vocal about racial injustices happening in America.

NewEnglandFilm.com’s Suzy Cosgrove had the chance to chat with Cooke, the writer/director of Wrath City, about what inspired her to make the film, who she is speaking to with it, and what she’s trying to communicate to her audience.

Suzy Cosgrove: What inspired you to write Wrath City? SC: I grew up in a majority white, lower to middle class New England town, so some of this language was familiar: ‘I don’t see race,’ ‘all lives matter,’ and ‘you’re the one with the problem, not the police.’ Was making this film a way to respond to those conversations in a cathartic way?

Cooke: I suppose the first thing that started influencing the film was a writing workshop in Boston where we were asked to write a series of stories over the course of a few weeks, and the group would provide feedback on each other’s scripts. During this time, a woman brought in a story about a population of clowns being oppressed and I really liked it. I was the last to give my feedback (keep in mind this is the fall of 2016 when a number of shootings of black people were in the news), and I said that in these times, it was very comforting to read a story that empathized with this kind of oppression. I was the only black woman in the class and was speaking with passion about the fact that police brutality against black people is a serious problem, as is the silence and ignorance of people.

After that the room got quiet and no one said anything until the woman who wrote it spoke up to say, ‘Well it’s actually about the bathroom laws…’ Everyone started talking about the bathroom laws, ignoring my comments completely. I was sitting there feeling embarrassed. I felt stupid, I felt dismissed, ignored, and I was heated! So when we received our next assignment to write a script about what one of the Seven Deadly Sins would look like as a city…I knew EXACTLY what Wrath City would look like.

In the midst of my writing this short story, I went to a film event looking for a camera person and this man started saying Black Lives Matter is the stuff that ‘divides people’ and he was kind of hitting on me while he was telling me why my life didn’t matter, and the way he was looking at me was just…

SC: Similar to when Josie is interacting with Malik for the first time? The moment is really poignant because it says a lot about how black people are sometimes seen as sexual objects. Was that also commentary you were trying to make with that interaction?

Cooke: Yes that was definitely something I was going for. Just to give an example, I love Golden Girls, but they don’t talk about black people or have black people on the show very often. The one time they do show a black woman, the conversation turns to the sex life of a black male and wondering how ‘good in bed’ they are. Their conversations about the men were very sexualized, they weren’t talking about them as though they were humans. This is something that happens in real life, like that man who was hitting on me and lusting after me while telling me that my life didn’t matter. As a single woman, sometimes it’s hard to know who’s genuine or who only wants the experience of being with a black woman. So all these frustrations and topics went into the making of Wrath City.

One thing I really want to get across is that I’m not talking to obviously racist people. It’s not for the people that can’t be helped. I’m talking to the people who should know better. My newsfeed is FILLED with the sexual abuse scandals in Hollywood, and it was filled with gay marriage support and commentary on the bathroom laws, and rightfully so—but many of those same people who speak out about these topics, ignore the fact that black lives are being executed in this country and the court system isn’t doing anything about it. I’m saying that when you’re standing up defending gay rights and women, I want you to step up and say something when our lives are being targeted too because our lives matter too, and that’s why we say Black Lives Matter. If you’re not, you’re being selective about which groups you care about and which groups should have equal rights.

SC: It’s like going to the doctor for a broken bone and they say ‘Well, all your bones matter.’ While that’s true, this specific bone is broken and we need to heal it. Just like this broken part of our country needs to be fixed.

Cooke: Yes, and the conversation has shifted. No one wants to talk about the rejected bill that would have put officers in jail if they shot and killed an unarmed person, everything else that’s going on has taken priority. That’s what this film is saying. To those people who shout equality, if you’re not speaking for us [black people] then you’re not speaking for everybody. You’re not about equality. That’s one thing I want people to take away: be about what you talk about. SC: Can tell me a little bit about Wrath City’s filming process? This seems to have happened really quickly.

Cooke: It did happen really quickly. That was a time when I was feeling a lot of passion. There are some times when I don’t really know what to write about, or there are other things in my life going on that I care about, filmmaking is only part of that. With everything going on in the world it sparked such a passion in me that I felt compelled to make this film, it was genuine and I think that shows.

So I wrote it for the workshop and then partnered up with Mike Sun, the DP, who I found on the NewEnglandFilm Facebook group. He helped me through the whole process: from pre-production all the way through post, he’s one of the most talented DP’s I’ve ever worked with. His eye for composition is amazing. The cast was very professional and passionate about their jobs. It really felt like I was preparing for a feature.

SC: Would you ever think about making Wrath City into a feature film?

Cooke: It would be really interesting, but Wrath City started off on a whim, sparked by situations I was in at the time, so it would have to come from a genuine place of inspiration for that to happen but it’s definitely something I’m considering.

SC: So what else is on the horizon for you, are you working on anything at the moment?

Cooke: Well this year I focused a lot on social films and I’d like to continue making them. A project that’s currently in post production called ‘One Law’ is part of an anthology web series dealing with social issues…and that’s about all I can say about it at the moment! Then in the spring I hope to get working on a film project dealing with the wealth gap in the black community.

I also want to get back to the core of where I really started getting into film, which is romantic movies, narrated by music, spoken word, or singing that deal with passionate matters of the heart. A lot of the work I do with these kind of film projects are based on real events and personal experience as sort of art therapy. One project I really am excited to work on is inspired by the song ‘I’m Not in Love’ by a 70s band called 10cc, and the movie I’m writing deals with a woman who has convinced herself she’s not in love with the new man in her life because she’s still in love with her ex-husband who died in the Navy.

All the while, I’m still trying to get Wrath City out there, making the festival rounds. It was recently accepted to the Denton Black Film Festival and the Houston Black Film Festival in Texas. I’m trying to go on a speaking tour to show Wrath City because I want to talk about these issues with people across the country at showings at colleges, libraries, and museums in places like Houston, Atlanta, and LA. I also want to speak to people who look just like me to say, ‘You don’t have to be a product of your environment. It doesn’t matter where you came from. You can be successful too.’ I’ll be traveling to New York soon to speak to a group called Girls on a Mission in February, and to Houston and LA in the spring, and then from there I just want to go everywhere, meet everyone, share my films, and have these conversations.

Raeshelle Cooke is a filmmaker and graduate of Bridgewater State University. Some of her other works include Mt.Washington, Sometime Around January, and Last Words.