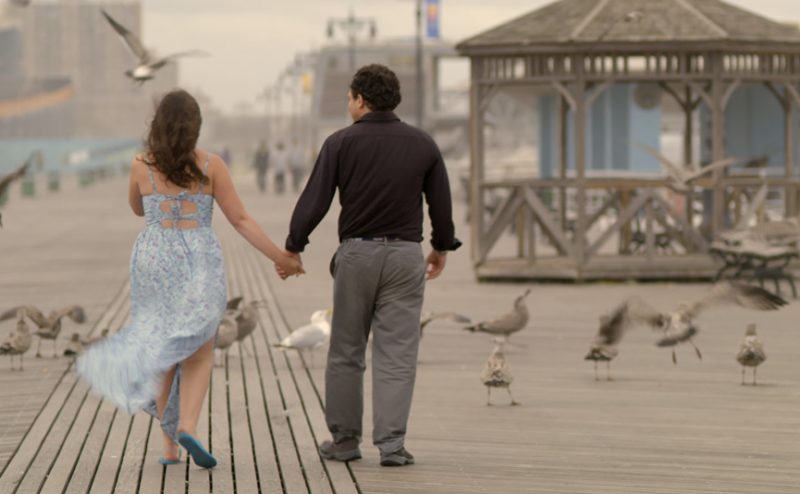 A still from Keep the Change, an unconventional romantic comedy playing at the 2017 Boston Jewish Film Festival.

A conversation with Ariana Cohen-Halberstam about embracing new storytelling mediums.

NewEnglandFilm.com chats with Ariana Cohen-Halberstam, Artistic Director for the Boston Jewish Film Festival about the themes for this year’s festival, how she selected some of its notable films, and why she integrated podcasting and VR into her lineup.

Last year’s theme for the Boston Jewish Film Festival centered on a singular subject: Jewish identity. This year however, a couple of dominant themes emerged when Ariana Cohen-Halberstam, the festival’s Artistic Director, started assembling the festival’s lineup for its 29th year.

The festival, which runs from November 8-20, 2017, explores storytelling of the past, present, and future as one of its themes. Through many of the films Cohen-Halberstam selected for the festival, the theme of female empowerment emerged, with a collection of compelling stories about women by women.

NewEnglandFilm.com’s Evan Crean chatted with Cohen-Halberstam about how these themes arose, about how she picked some of the festival’s notable films, and about why she brought new storytelling techniques like podcasting and VR to the festival.

Ariana Cohen-Halberstam: A couple of themes emerged organically when putting together this year’s program. The first is storytelling. From our live-podcast recording of WBUR’s “Circle Round,” in which actors read traditional folk stories to NuWave, our virtual reality program, we are exploring how stories are told—in the past, and in the future. I like how these two programs bracket the more traditional festival program and point out something that is obvious but often forgotten—films are vehicles for telling stories.

The other theme that emerged is that of women’s empowerment. Some examples include Heather Booth: Changing the World and Bombshell: The Hedy Lamarr Story. Another is Big Sonia, which is about a 91-year-old woman who survived the Holocaust and now, on top of working in her tailoring shop six days a week—she travels to schools and prisons to share her story. There’s also In Between, a narrative film about three Palestinian women living in Tel Aviv. They each have very different backgrounds, but they all must forge their own paths in a traditional, patriarchal society. All of these films were directed by women.

EC: How did you pick this year’s opening night and closing night films?

Cohen-Halberstam: Bye Bye Germany, our opening night film, explores the period right after WWII when many European Jews were living in displaced persons camps—they didn’t have homes to return to, and they couldn’t return to the places they were from. They were waiting to see whether they would be able to move to America or Israel, or Argentina, or, wherever. I like that the film echoes the tone I’ve heard from survivors who talk about this moment in time—it approaches a difficult topic with humor. It was an obvious pick because it talks about an important moment in modern Jewish history with a bit of “Yiddish flavor.” Director Sam Garbarski will be Skyping in to talk to us following the screening.

One thing that I love about this year’s lineup is how many of the films explore serious subjects, in a way that lets the audience breathe…and laugh. Our closing night film, Keep the Change, is a great example. It’s romantic comedy—fun, funny, and sweet, but it does something different. It’s about two people on the autism spectrum. The Boston Jewish Film Festival also runs the ReelAbilities Film Festival in Boston, so we are constantly having conversations about the importance including actors with disabilities when casting characters with disabilities. Keep the Change is a case for inclusion in casting—the two lead actors (Brandon Polansky and Samantha Elisofon) are fantastic—and they are also on the autism spectrum. Brandon, Samantha, and director Rachel Israel will be at the screening to talk with The Boston Globe‘s Meredith Goldstein.

A still from Bye Bye Germany.

EC: What are some other noteworthy films playing this year?

Cohen-Halberstam: We are doing a 90th anniversary screening of The Jazz Singer. There is so much to discuss with this film. It’s a big deal in film history as the first film with synchronized sound, or “talkie,” but it is also about an immigrant family struggling to maintain their culture, religion, and traditions. There are incredible performances from Yossele Rosenblatt and Al Jolson, but there are major questions we have to ask today about Jolson’s use of blackface. There will be a panel following the screening with Thomas Doherty from Brandeis, Joshua R. Jacobson from Northeastern University, and Joel Rosenberg from Tufts University, moderated by Kaj Wilson. Every year when I put together panels, I am reminded of how lucky we are to be in Boston, with access to some of the smartest thinkers in the world.

I also want to mention one of our sneak peek screenings, Scaffolding. This is an Israeli film that played this year at Cannes and TIFF. It’s the story of teenager named Asher, who is from a working-class home in Israel. His father is determined for him to take over his scaffolding business, but Asher becomes inspired by one of his teachers to think more deeply about his life and his own desires. On the surface, this sounds like many films you may have seen before, but the plot takes new turns and the acting takes the story to another level. Asher Lax, who plays the main character, was a student of the director and inspired the film. He’s not a professional actor, but he is breathtaking in this role.

EC: Last year you started BJFF Jr!, a program for kids, and offered your first live podcast. This year you’re combing the two with a live recording of the podcast Circle Round. How did these two ideas come together?

Cohen-Halberstam: I am always looking for great festival programming for kids—because why should the grown-ups have all the fun?! That’s why BJFF Jr! was born. But finding great Jewish films for kids is not easy. Last year we showed Abulele, a wonderful movie about a friendly monster, but the program was only accessible to kids who could read subtitles or speak Hebrew.

We are always exploring new media, so incorporating podcasting felt natural for the festival. As I mentioned, this year’s festival is putting the art of storytelling in the forefront. When I heard about “Circle Round” from Jessica Alpert Silber, the show’s producer, I was so excited because the podcast preserves one of the oldest traditions in storytelling. And luckily WBUR’s “Circle Round” was excited about being a part of the festival. At the live show there will be two stories—a Yiddish and an Israeli folk story performed by five actors—as well as live music. I love the idea of having kids experience something timeless—a good story with an important lesson—in the form of something very new: a live podcast. 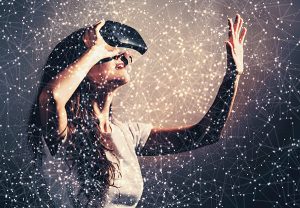 EC: Actress Marlee Matlin is going to be at the festival to screen and discuss Dirty Dancing. How did that come about?

Cohen-Halberstam: We wanted to have an opportunity to talk to Marlee, not just about being an Academy Award winning actress or a deaf actress, but about being a Jewish actress. In addition to talking about her career, we thought it would be fun to discuss a Jewish movie that inspires her. We had several conversations with her and she considered many films. In the end she chose Dirty Dancing and I’m so happy with her choice! Dirty Dancing lends itself to a really an interesting conversation because it is such a Jewish movie without ever calling itself a Jewish movie. Also it turned 30 this year, so it’s a great time to revisit the film.

EC: Your new program NuWave showcases virtual reality films. How did you come up with the idea for it, and how did you find the films for it?

Cohen-Halberstam: Virtual reality has been showing up at a lot of the major festivals, so I have been thinking about VR for a while. I began asking my colleagues about their experiences with VR and thinking about the best way to bring it to Boston. When I met with Kathy Bisbee and her colleagues at the Brookline Interactive Group, I knew our program had a home and that we had found our partners. BIG is not only a space for creating and experiencing VR and 360 video, but a place where VR storytelling is part of the daily conversation. Some VR experiences were submitted to us directly. Others, we reached out to after reading about them. I saw Tzina, one of the VR projects we are including, when I was in Tel Aviv this summer. Its creator, Shirin Anlen, also recommended some great projects to me.

EC: Next year is the festival’s 30th year. Should we be expecting some big events to celebrate?

Cohen-Halberstam: Yes! We have lots of fabulous celebratory events happening throughout the year including a retrospective of some of the best films to have screened at the BJFF over the past 30 years, a trivia night, a comedy night, and of course, lots of great previews and premieres of films.

The Boston Jewish Film Festival runs from November 8-20, 2017. For more information on the festival, including screenings and tickets, visit bjff.org.