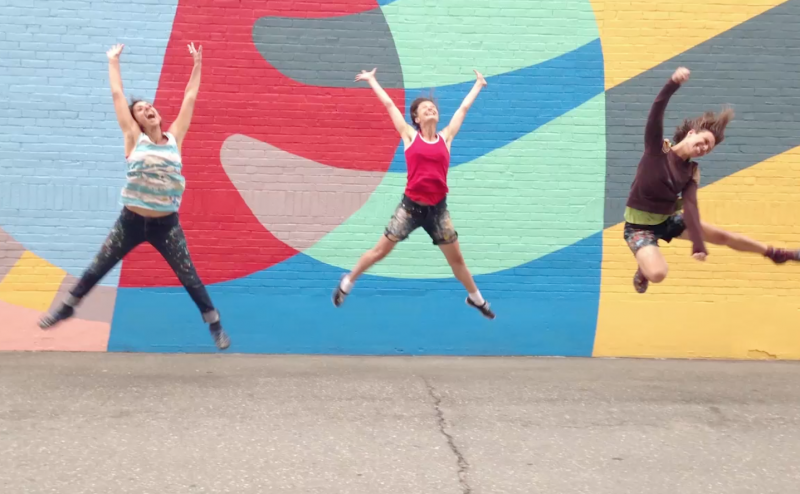 A still from the documentary short Oak Street Mural.

A conversation with Scott Sell about the documentary short Oak Street Mural.

Oak Street Mural, which screens through October 15 as part of the 2017 Online New England Film Festival, captures the creation of a public mural in Rockland, ME through gorgeous time-lapse photography. In this interview with NewEnglandFilm.com, one of the documentary’s directors, Scott Sell, discusses the impetus for making it and how his background in journalism led him to filmmaking.

There’s no better way to show the incredible progress on massive community projects that take weeks or months to complete than time-lapse photography. A shining example of this storytelling method is the Alexis Iammarino and Scott Sell-directed documentary short Oak Street Mural, which captures 16 days of work on the Oak Street mural, a new addition to the cultural vibrancy of downtown Rockland, ME.

The mural was guided by Iammarino, a local community mural artist who runs SaturdayStudio at the Rockland Recreation Center. She was joined by two professional Baltimore-based mural artists, “Jessie and Katey”, who have been collaborating on large-scale murals and installations across the country since 2001. The mural was also completed with help of local artists and volunteers of all ages.

Originally screened at the Maine Short Film Festival, Oak Street Mural is playing through October 15 as part of the 2017 Online New England Film Festival. In following interview with NewEnglandFilm.com, director Scott Sell discusses the inspiration for the documentary, how his background in journalism led him to filmmaking, and the upcoming projects he’s working on.

NEFilm: When did you realize you wanted to pursue film?

Sell: I was a writer and reporter for a long time. In 2008, during the recession when no one was hiring at newspapers, I decided to go back to school to expand my journalistic toolkit by learning new multimedia skills. I fell in love with storytelling through video while I was there, and have continued to focus on documentary films since then, though I’ve branched out to work on narrative films as well.

NEFilm: What inspired you to make this film?

Sell: There was a need to document the daily progress of this massive mural and we wanted to do it in a fun way.

NEFilm: At what festival did you have the best experience showing your film?

Sell: The Maine Short Film Festival. We had a great conversation in Brunswick last year about how music plays an important role in the tone and energy of a film.

NEFilm: Who made up the cast and crew for Oak Street Mural?

Sell: The cast were the actual painters/helpers on the mural. The crew were the two of us, as well as one of our friends.

Sell: A short narrative horror/comedy film, as well as a short documentary about the first offshore wind farm in the nation off the coast of Block Island, RI.