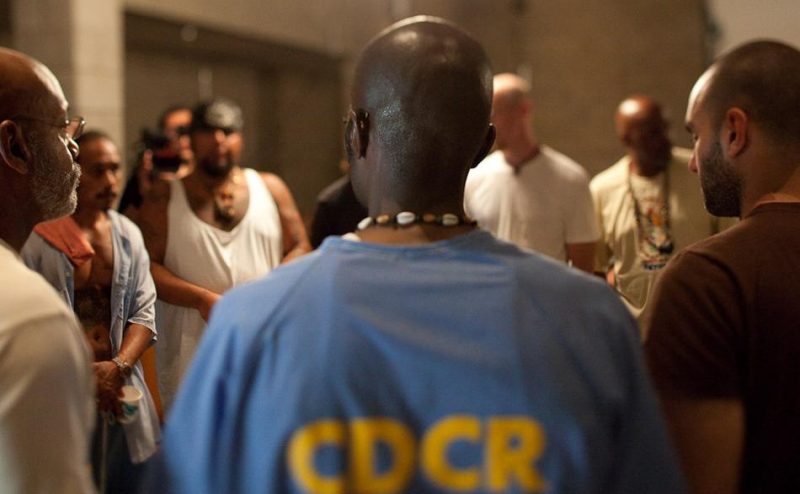 A still from The Work, which screens at the Camden International Film Festival and plays as part of the DocYard's fall lineup.

Camden International Film Festival, The Boston Latino Film Festival, the DocYard, calls for fellowship applications, and more. See screenings, opportunities, and industry buzz for the month of September. Send us news to news@newenglandfilm.com.

The ninth annual Online New England Film Festival launches here on September 9! Curated by our regional partners, the festival is a selection of short films that runs for 45 days. Learn more and support the festival here.

Check out the Maine Outdoor Film Festival around the state this month. For dates, venues, and a list of screenings, go to maineoutdoorfilmfestival.com.

Colorado travels to Portsmouth, New Hampshire at the Music Hall’s “Telluride by the Sea” September 15–17. Check out special events and selections from the 44th Telluride Film Festival. For a schedule and tickets, click here.

Save the Waves Film Festival visits Maine on September 17 from 4–8:30 pm. O’Maine Studios in Portland hosts the event, which will feature documentaries, food, and other programs. Learn more here.

Celebrate the DocYard’s fall season with an opening screening of The Reagan Show on September 11 at 7:00 pm. Films screen at the Brattle Theatre in Cambridge, followed by filmmaker discussions. Visit thedocyard.com for more information.

The feature comedy I Feel Pretty has been filming in Boston over the past few weeks. Written and directed by Abby Kohn and Marc Silverstein, the film stars Amy Schumer and Michelle Williams. Read more at Boston.com.

Another successful year for the Woods Hole Film Festival and Flickers’ Rhode Island International Film Festival. Read more about the festivals and winners here and here.

The documentary feature Voyeur by Vermont College of Fine Arts alumnus Josh Koury will premiere at the 55th New York Film Festival on October 4. Co-directed with Myles Kane, the documentary, which was Koury’s thesis film at VCFA, follows 84-year-old modern journalism legend Gay Talese as he prepares to publish his controversial book, “Voyeur’s Motel,” about a Colorado motel owner who secretly watched his guests through custom ceiling vents and an observation platform. To learn more about the Voyeur premiere, visit http://www.filmlinc.org/nyff2017.

Submissions are now open for next winter’s Providence Children’s Film Festival. Filmmakers are encouraged to submit for short, feature, and youth categories. The early bird deadline is September 15, the regular deadline is November 15, and the late deadline is November 28. For fees, guidelines, and more information, go to providencechildrensfilmfestival.org.

Submissions are now open for the Karen Schmeer Film Editing Fellowship. The submission deadline is September 29. Learn more at karenschmeer.com.

The Radcliffe Institute for Advanced Study is currently accepting applications for 2018-2019 fellowships in creative arts, humanities, and social sciences. Individuals can apply through September 14. For more details, click here.