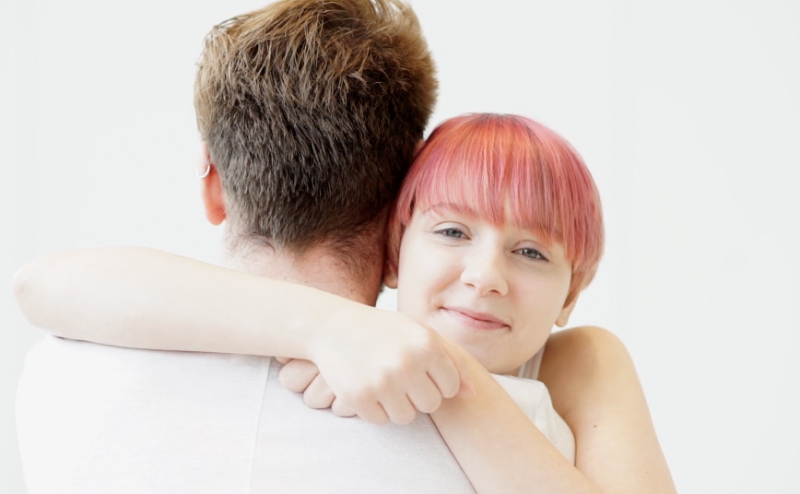 Christina Nealis gives someone a hug in this still from Dennis Tsai's film Pan-.

Filmmaker Dennis Tsai talks about how his college experience inspired his film Pan-.

Screening through October 15 as part of the 2017 Online New England Film Festival, Pan- is a beautiful portrait of a pansexual individual’s struggles and her journey of self-discovery. In this interview with NewEnglandFilm.com, the director of the film, Dennis Tsai, talks about about how his college experience inspired the film and about the excitement of screening his movie at a local film festival.

One of the great things about college is that it exposes students to new ideas and perspectives that can challenge them and stimulate them intellectually. Such was the case for Taiwan native Dennis Tsai, who is currently enrolled at Massachusetts College of Art and Design, where he is dual-majoring Animation and Film/Video. Tsai’s introduction to the LGBTQ community there not only allowed him to forge some great friendships, but it led to some illuminating conversations that inspired his film Pan-, a portrait of a pansexual individual’s struggles and her journey of self-discovery.

Originally screened at the Mass Reality Check – Salem Film Festival, Pan- is now screening through October 15 as part of the 2017 Online New England Film Festival. In the following interview with NewEnglandFilm.com, Tsai talks about about how his experiences at Massachusetts College of Art and Design inspired the film, about the excitement of screening his movie publicly, and about the project he’s working on for his senior thesis.

NEFilm: When did film first interest you?

Tsai: When I was about ten years old I used my dad’s Sony V8 camcorder to make stop motion animation with my clay figures and toys. And at that moment, I knew that I wanted to become a filmmaker. I started learning some filming skills from online tutorials and then decided to join the film program in Massachusetts College of Art and Design to professionalize myself as a filmmaker.

NEFilm: What inspired you to create Pan-?

Tsai: I had never been in a LGBTQ community before coming to the Massachusetts College of Art and Design. Fortunately, I have made some great friends in this community. As a film major, I decided to make some video portraits of my beautiful friends to show people their voices.

NEFilm: How did you find the cast and crew for the film?

Tsai: I actually asked Christina (the main actress in Pan-) to have a cameo in another one of my projects and while chitchatting with her, I found out that she has some fascinating stories to share. So I asked her if she was interested in playing the main role in my next project, and she consented.

NEFilm: Where have you had the chance to showcase Pan-?

Tsai: I showed the film in class for review and critique. Fortunately, it was later chosen by the Mass Reality Check – Salem Film Festival. It was my first time screening my work in public, outside of school. It was an interesting experience sharing my thoughts with the audience after the screening.

NEFilm: Do you have any projects that you are working on now?

Tsai: I will be working on my senior thesis in my last year in Massachusetts College of Art and Design. It will most likely be a documentary about my parents’ childhood. I will go visit where they grew up and recreate some of the scenes from their stories.

Watch Pan- on NewEnglandFilm.com through October 15 as part of the 2017 Online New England Film Festival.