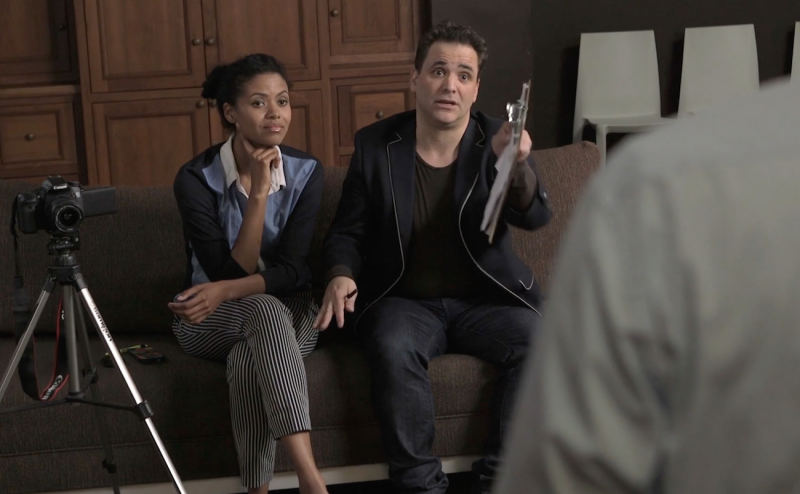 Chris Caccioppoli chats about his film East of Hollywood and the role of Asian-Americans in Hollywood.

Chris Caccioppoli challenges misrepresentation of Asians in the entertainment industry with his mockumentary East of Hollywood, which is screening through October 15 as part of the 2017 Online New England Film Festival. In this interview, he talks about the role of Asian-Americans in Hollywood, about seeing audiences interact with his films, and about the exciting new projects he’s working on.

Chris Caccioppoli received the inspiration for his short film East of Hollywood from a fairly unique source—the casting call for another film he was shooting. While auditioning Asian-American actors, he found that many came prepared to perform stereotypes due to the entertainment industry’s frustrating assumption that Asian characters only fit a narrow set of traits. After speaking extensively with his actors about this prevalent issue, Caccioppoli realized that he could shed light on it through film, and so East of Hollywood was born.

Shot as a mockumentary, the short features Ken Chang (Michael Tow), an actor that is too American, so he undergoes “Orientalification” in order to land a role on a network TV show. East of Hollywood follows him as he takes Mandarin lessons, learns martial arts, and even attempts to thicken his accent just so he can have a shot at playing a bodega owner in an offensive network television show called Kung Fu Mom.

Screened at several festivals, and the winner of numerous awards, East of Hollywood is now playing through October 15 as part of the 2017 Online New England Film Festival. In this interview with NewEnglandFilm.com, Caccioppoli discusses how he became passionate about exposing the misrepresentation of Asian-Americans in Hollywood, about the intoxicating experience of seeing audiences react to his film, and about the exciting new projects that are challenging him.

NEFilm: How was film a part of your life growing up?

Caccioppoli: I’ve been involved in storytelling for as far back as I can remember. When I was five-years-old I wanted to be a writer and I spent my childhood writing stories, essays, and poems. It was clear that most of what I wrote was very visual and, in retrospect, read more like a screenplay than anything else.

In my teens I taught myself screenwriting and read up on how film crews were structured and how financing and distribution worked. I was also fortunate enough to have access to TV equipment at my high school where I was able to teach myself a lot about the craft. I continued on to major in television in college where I wrote, directed, and produced dozens of episodes of award-winning TV. Having only one week to deliver 22 minutes of content (mostly comedy) taught me how to be a nimble filmmaker and how important it is to be flexible, both creatively and on set.

NEFilm: What was the inspiration behind East of Hollywood?

Caccioppoli: While casting my feature film, The Cocks of the Walk, I found myself needing to cast many Asian American actors, all of whom came prepared to audition in an accent and portray a stereotype. Not because they wanted to, but because it’s what they assumed I wanted to see. And I think on some level, they were right. But why did I need these stereotypes in my movie? What did it add to the final product? And more so, why did that seem more acceptable than asking any other race to become a caricature on film?

I couldn’t answer any of these questions. Perhaps I was just subconsciously influenced by what I was exposed to in the media. After all, it seems that aside from misrepresentation there is very little representation at all for Asian Americans in Hollywood. And as I got to know the actors in my feature on a more personal level, I discovered they all had the same story. They all had to pretend to be more Asian to get a role, despite most of them being born and raised in America and not knowing a word of (insert language of choice here). The most vocal about the topic, and subsequently the lead actor in this film, Michael Tow, shared the desire to shed light on this often overlooked problem. And so, East of Hollywood was born.

NEFilm: How did you find actors who are similarly passionate about the presence of Asian Americans in cinema?

Caccioppoli: I had worked with most of the actors on previous projects. Some of the cast members had performed in my last three films. The rest of the cast and crew I found through the producer/actor who is based in Boston.

NEFilm: Where else have you gotten the chance to show East of Hollywood?

Caccioppoli: This film has been shown in about 20 festivals and has won just as many awards, including multiple awards for Best Comedy, Best Short, Best Screenplay, Best Directing, Best Editing, Best Actor, and Audience Choice. Attending these festivals are great because you get to see the way people experience your film. It’s one thing when a movie is funny and there is a pop of laughter from the crowd, but it’s another when you have sustained involvement and you see them laughing, cringing, smiling, and reflecting throughout. Sitting among the crowd and being a part of that genuine reaction is probably as close to a runner’s high as I can get (because I’m too lazy to run).

NEFilm: What sort of advice do you have for aspiring filmmakers?

Caccioppoli: My advice to writers: It’s never done or ready, it’s just whatever state it’s in when you stop working on it.

My advice to directors: Find a brand for yourself and make sure it’s achievable.

My advice to people submitting to festivals: Remember that everything and everyone in film has a brand. Do your research, know the brand of the festival you are submitting to, know your own brand and style and see if it’s a match. Your success rate is low even when you are a good fit, so maximize your chances by finding the right portfolio of festivals for your film.

NEFilm: Are you working on anything new at the moment?

Caccioppoli: I am shooting a Latin-language film in Rome, and needless to say it has been a wild experience. I wrote the script in English and it was translated into Latin by a few PhD level classicists. Directing actors in a language none of us know presents all kinds of challenges, but the locations are beautiful and I’m excited to see where it goes. I am also in post production for a short film called The Loving Dead. It’s a playful look at inter-monster dating. It was my first experience with special effects makeup and I learned a lot. Additionally, I was asked to direct a pilot episode of a single-camera sitcom. It’s been a busy 2017.

Caccioppoli: I am very bad with social media and am trying to get better. I hope to be more active and have plans to upload some filmmaking videos on YouTube. In the meantime, you can check out my work at www.chimeraentertainment.com and follow me on Twitter/Instagram @chrisetcetera.

Watch East of Hollywood on NewEnglandFilm.com through October 15 as part of the 2017 Online New England Film Festival.