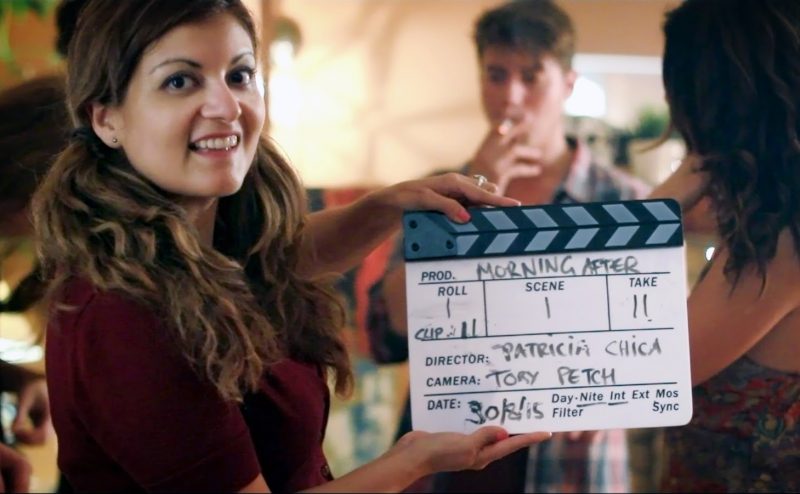 Patricia Chica on the set of Morning After.

A conversation with Patricia Chica about Morning After, her film playing at RIIFF 2017

Patricia Chica explains how her film Morning After, which makes its US premiere at the 2017 Flicker’s Rhode Island International Film Festival, explores desire and arousal that goes beyond the conventional physical realm.

Patricia Chica launched her filmmaking career at the Flicker’s Rhode Island International Film Festival (RIIFF) in the year 2000 with her short film La Promesse, which won the Best Foreign Film award. The experience was one that would stick with her—a validating and empowering moment for the young filmmaker.

Now seventeen years later, Chica is poised make a mark again at RIIFF with the US premiere of her latest film Morning After, a thought-provoking piece which questions the static nature of sexual identity, and explores the enigmatic power of love and attraction that brings human beings together. This year isn’t just a big deal for Chica though, it also marks an important milestone for RIIFF, which enters its 35th year during its run from August 8-13, 2017.

Patricia Shea, a Print Traffic Associate with RIIFF, spoke with Chica about how her film explores sexual identity, about her challenges in casting one of the movie’s leads, and about the uniting themes in her work.

Patricia Shea: What was your biggest influence in deciding to pursue a career in film? What were the most helpful courses you took in college?

Patricia Chica: I always wanted to work in film and television so it was a no-brainer for me. At first, I wanted to be in front of the camera either as a television host or an actress. When I started film school, I enrolled in the student TV station and hosted some shows for them, as well as played in a few student shorts. One day, they needed someone to do camera and asked me if I could help. I really enjoyed the experience. I realized then, that I wanted to have the creative control and that I felt more empowered being a director and working behind the camera. I have never changed my mind since then.

In college, I took various courses that developed my critical thinking and to this date, I find that they helped shape the director that I became, more than the actual film classes. Courses such as Psychology, Anthropology, Philosophy, Art History and Literature had a huge impact on my storytelling development.

PS: What do you find the most challenging about what you do?

Chica: The most challenging part of my profession is fundraising and getting film projects financed through government agencies (in Canada), private investors (in the US) and pre-sales (worldwide). The rest of the process is not really difficult for me as I really love the journey of independent filmmaking with all the ups and downs that it entails.

PS: Are there any changes taking place now in film that you notice? If so, what do you think they mean for the future of film?

Chica: I have witnessed a considerable decrease in budgets in the past 10 years, but at the same time an increase in the number of films produced worldwide, especially by women directors.

This is a great year for women. There is a positive shift happening in the industry’s consciousness and more and more women are getting the opportunities to direct. It’s a great time for genre film as well. Horror movies are very profitable and genre directors and getting more and more recognition as auteurs. This year, at Festival de Cannes, it was all about female directors, diversity and LGBT content. It was really incredible to witness the conversations at the Film Market about what’s being sought-after these days.

PS: Why do you think editing is an influential part of the filmmaking process?

Chica: Editing is the final re-write of the film. Through editing, we can infuse a vibe, an emotion, a rhythm and an atmosphere that is not present in the raw footage. You can add a lot of subtext with editing. Over the years, I have developed a cinematic style characterized by the use of surreal imagery and meticulous editing techniques to portray the intrapsychic of my characters. I use extradiegetic and dreamlike imagery to intensify characters’ emotions, heighten fantasies and allow the audiences to think differently about certain realities.

PS: What was your biggest influence in deciding to create Morning After?

Chica: With Morning After, I wanted to speak about human connection, energy and sexual enlightenment from a fresh perspective other than the labels of LGBTQ or heterosexual’s points of view. I wanted to make a film about desire and arousal that would go beyond the conventional physical realm…a deeper and perhaps more spiritual approach to sexuality, self-expression and self-acceptance.

So when my friend Kristian Hodko pitched me the script of Morning After, it presented the perfect opportunity for me to hit all of these narrative targets in one single project. Morning After is more than a film about the fluidity of sexuality and the diversity of sexual identities. It is about accepting yourself the way you are. It’s also an inspiring tale about human connection, oneness and finding the flow that unites the sensual experience with the truth within us.

This singular and provocative story is intended to be optimistic, uplifting and transformative for all viewers, wherever they are on the spectrum of sexuality. I hope the people who watch the film will be touched by the story of Michael (played by the outstanding Thomas Vallières) as much as I am. It is an inspiration to know that we can choose to be freed of sexual labels in our lives, and honor the true meaning of human connection with others and acceptance within ourselves.

PS: What was the most difficult part of your process in bringing this film to life?

Chica: Finding the funding for this film was the most challenging part of the process. We created two Indiegogo campaigns and went to find private donors and sponsors. We are very grateful with all the support we received from people who truly believed in this film. The film took several months to finance.

PS: How did you go about finding actors? Did you encounter any challenges?

Chica: Kristian Hodko who is the writer and who also plays Edward in the film wanted the cast to have strong chemistry among themselves. That’s why he treated the casting process as “dating.” He went on coffee dates with the actors we liked to see how the energy flowed and how open-minded they were about sexual fluidity. Our intention was that the five actors needed to fit together in every combination possible.

The most challenging part was casting the role of DANA. The role was written to be an Arabic young woman and we contacted every Middle-Eastern actress we could find in Quebec, Canada and the US. We even auditioned Latinas, Indians, Italians, Asians, and African-American girls for this role. A lot of the Middle-Eastern girls did not feel comfortable with the subject-matter and declined to even read for the part.

A week before the shoot, we still hadn’t found our DANA, and were almost going to cancel the production… until we received the self-tape of French-Canadian actress Jordana Lajoie. Even though she’s not Arabic, she was perfect for the role! She just had the right sensual energy for the part.

PS: What do your films have in common with one another? What makes them different?

Chica: The themes that I had explored in my previous films were about human beings who are in the darkest moments of their lives going through ultimate challenges, but they always find a way to rise above those difficulties in order to empower themselves. They must struggle to find light and hope and to always do it in a way that’s conscious, not necessarily during the journey, but by the end when they bring awareness and hope out of something dark.

After spending the last decade working on darker subject-matter and genre films, I strongly felt the need to switch gears and speak about something lighter and profound at the same time. I have always been very intrigued by sexuality and identity. So when Kristian Hodko presented me the script of Morning After, I immediately jumped on it! Whatever the genre I work with, there is a common theme to all of my films: self-empowerment, enlightenment and awareness on taboo subject-matter.

PS: Why do you think film festivals are important for film as a whole?

Chica: Films festivals are very important for the discovery and survival of independent cinema and for us, the filmmakers. The two go hand-in-hand together. We need film festivals to present our films as much as film festivals need us to program them. There is a close collaboration between the two that I consider sacred and that I like to nurture throughout the years. I always think: how can I serve the festival the best way possible by providing support, involvement and cooperation when they program my film.

PS: What do you find most rewarding about your job?

Chica: Being able to travel to film festivals and meeting different audiences around the world is the part that I most enjoy about being a filmmaker. If someone, somewhere could be touched, inspired and transformed by my work, that is the most rewarding feeling of this crazy journey called independent filmmaking.

I have a genuine attachment to the Rhode Island International Film Festival. My first short film out of film school La Promesse won an award there in 2000 and it launched my career as a filmmaker. Being part of the RIIFF since the early days was a great validation for me. It empowered the young filmmaker that I was back then. I always remember how great it is to be back to Providence and I am very grateful for the opportunities this festival has offered to my films and the doors it has opened for me. I will always come back to Providence and I’m very proud our US premiere will be at the RIIFF again this year.

This interview was originally published on the RIIFF blog and has been shared with the festival’s permission. Morning After makes its US premiere at 2017 Flicker’s Rhode Island International Film Festival on Saturday, August 12, 2017 at 7:15 pm. To learn more about RIIFF and to see the festival’s full lineup, visit film-festival.org.