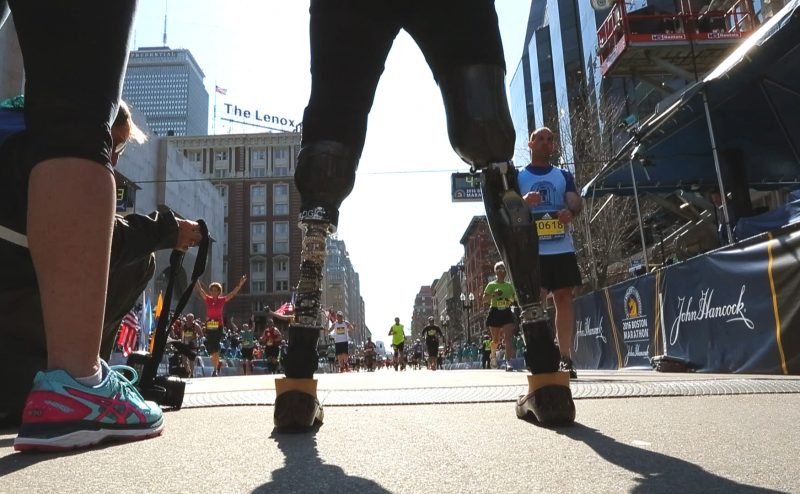 A still from Marathon: The Patriots Day Bombing, screening at Closing Ceremonies of the Middlebury New Filmmakers Festival.

Catch outdoor screenings at Portland Summer Films this month. Films screen Sunday evenings at dusk at Congress Square Park in Portland, Maine. Watch A Monster Calls on August 6 at 8 pm, The Visitor on August 13 at 8 pm, Charlotte’s Web on August 20 at 7:30 pm, and La La Land on August 27 at 7:30 pm.

The Woods Hole Film Festival runs through August 5 on Cape Cod. For a full schedule of screenings and special events, visit woodsholefilmfestival.org.

Boston’s Museum of Science presents sci-fi film screenings Thursdays this summer. Watch a feature film at the Charles Hayden Planetarium; tickets are available in advance or on the day of. Watch Galaxy Quest on August 3, and a marathon of Alien and Aliens on August 31. Learn more here.

Movies on the Block returns to Grant’s Block (260 Westminster St) in Providence, Rhode Island on Thursday evenings at sundown. Screenings are free, first-come first-served space, and weather-dependent. Watch Moonlight on August 3, Dumb and Dumber on August 10, Do the Right Thing on August 17, Stir Crazy on August 24, and Raging Bull on August 31. For more information, visit moviesontheblock.com.

The documentary I Know A Man… Ashley Bryan, directed by Maine filmmaker Richard Kane, screens around the state this summer. Visit the film’s website for dates and venues.

Stowe Story Labs announced its finalists for its fellowships, including the NewEnglandFilm.com fellowship. Read more here.

A trailer has been released for the feature film Proud Mary, filmed in Boston and Lowell earlier this year. Directed by Babak Najafi, the thriller stars Taraji P. Henson and Danny Glover.

Robert D. Krzykowski’s film The Man Who Killed Hitler and then Bigfoot will film in Montague, Massachusetts this summer. The film stars Sam Elliott and Aidan Turner. Read more here.

The Radcliffe Institute for Advanced Study is currently accepting applications for 2017-2018 fellowships in creative arts, humanities, and social sciences. Individuals can apply through September 14. For more details, click here.

Submissions are now open for next winter’s Providence Children’s Film Festival. Filmmakers are encouraged to submit for short, feature, and youth categories. The early-bird deadline is September 15, the regular deadline is November 15, and the late deadline is November 28. For fees, guidelines, and more information, go to providencechildrensfilmfestival.org.