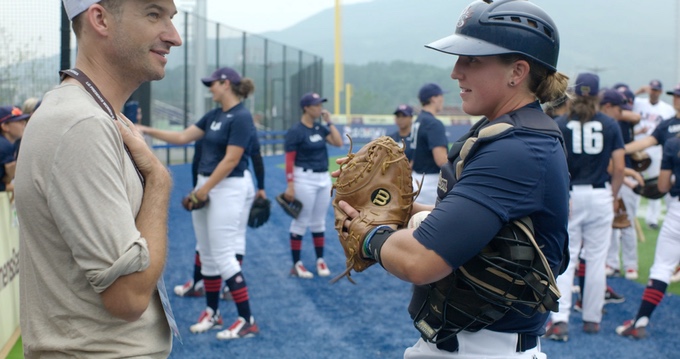 Former Vermonter and filmmaker Matthew Temple was inspired to make his film Girls of Summer: Big Diamond Dreams after witnessing his own daughter’s journey through Little League, which prompted him to ask, “Why are there no girls on the baseball diamond?” After doing some research, he discovered there had been decades of concerted efforts to keep girls off the big diamond, yet girls keep pushing for the right to play. In his own experience as a parent, he saw how girls and women in baseball face implicit bias, gender stereotyping, and identity limitations that we still assign to women.

Despite over 100,000 girls playing baseball in youth leagues all across America, the number dwindles to only 1,200 girls playing in high school; at every age, girls who play baseball are still an anomaly. Girls and women who pursue this sport often feel alone in their endeavor, forced to fight a cultural norm when all they really want is to play a game they love. They almost always play on all-boys teams, and frequently have to explain, “I know what sport I play, and it’s not softball. I play baseball.”

The film will be shot across the country, and one of their main characters is from Boston where she plays in a men’s league. The film is currently seeking $24,000 on Kickstarter and is nearly halfway there. Here’s where you can show your support.