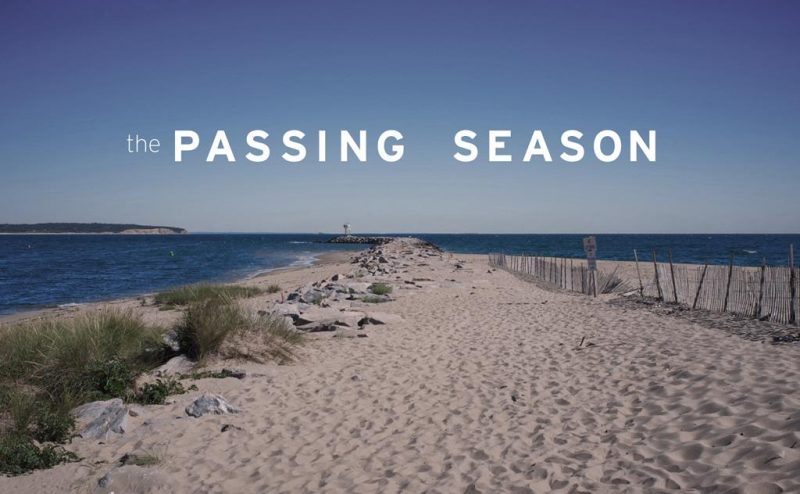 Filming in RI: The Passing Season

A conversation with Gabriel Long and Rebecca Atwood about filming their feature The Passing Season in Rhode Island and their decision to move from New York to the Ocean State.

Producer Rebecca Atwood and Director Gabriel Long discuss making their film The Passing Season in Rhode Island while living in New York and what inspired them ultimately to move to the state. Aurora Providence hosts a free screening and release party for The Passing Season on Wednesday, May 10, 2017 at 6:30 pm.

Last summer, my husband and I moved from Brooklyn to Providence, Rhode Island just as our first feature was premiering at the Rhode Island International Film Festival.  We’d shot the film entirely in Rhode Island (he wrote and directed, I produced), and somewhere in post-production, we decided to become full-time New Englanders. Now, nine months later, the film is being released, and we’ve settled into the “Creative Capital” and started a production company here. Below is a conversation between us about the experience of making our movie and moving to RI.

Gabriel Long: People ask us why we decided to leave New York and I feel like my answer is different every time, but I’m curious what your answer to that question is today.

Rebecca Atwood: Yeah, we are always answering that question!  I think today my answer is that we were living in New York and we were both working in the arts—I was managing actors and doing some producing, more for fun than for money at that point, and you were working a bunch of different editing and directing and producing jobs—and I think we both felt like it was such a grind. We were doing everything we could just to try to make enough money to live on. What we really wanted, but felt was out of reach, was to make enough money, not a ton, but enough, and then still have the time and resources to do exciting creative projects.  That time/resources equation always felt out of reach in New York for some reason.

Long: The other answer that changes for me every time is “why Providence?”  I usually say that we knew about Providence because I grew up in Rhode Island but that that wasn’t the deciding factor.

Atwood: Yeah, and I also feel like as a woman it has been really important to me to not say we moved here just because it’s where you’re from.  It was a deliberate decision for both of us, we both had a lot of things that attracted us to Providence.  We wanted to live in a small city and Providence really is so creative, and it’s situated in the midst of all of this natural beauty.  And it feels like the vibe is also kind of scrappy, in a good way.

Long: People are pretty straightforward and there’s a come-as-you-are sentiment that I like.

Atwood: Right. And I think everything from the big street art installations that we saw when we were first driving around here to the fact that there’s two really popular art house theaters, it just seemed like it would be a fit for us.  The art scene and the creative community seemed friendly and accessible. I also always wanted to be a New Englander and thought that I wouldn’t get to do that until I retired or something!

Long: I’d add to the thing about the creative community, I had this sense that people here were doing stuff in a collaborative way, based on what they thought was cool and fun and interesting, not just what would make the most money or further their careers the most.

Atwood: People are very approachable here. This might sound weird but to me there’s almost an implicit altruism, at least compared to the other places I’ve lived. Everybody seems to have the sense that if you’re living in Rhode Island you’re not just hellbent on finding the fastest route to extreme success.

Long: I think that hyper-focus on success erodes some of the trust within the New York creative community.  There’s always a “who wants what from whom” hierarchy thing in the air.

Atwood: We’ve really loved shifting away from that, working on a more personal level, not feeling like we’re constantly having to beat other people out for jobs.

Long: When we were actually shooting the movie, that was June 2015.  We hadn’t seriously considered moving by that point, right?

Atwood: No, not yet, but what I did feel when we were shooting the movie was that I was thrilled to be shooting here because it’s such a special place.  I was thrilled to get to explain and pitch the place to the people who we were bringing here for the movie.  And every time I would come here and then have to leave, I’d get depressed.

Long: For me, it was the first time that I had spent time here on my own terms as an adult.  Since high school ,whenever I came back it was a short vacation or a holiday, and that experience of a place is so different than what it felt like to work here.  Shooting here gave me much more of a sense of what it would be like to live and work here.

Atwood: Shooting the movie in your hometown was key to pulling it off. I feel like that’s a big part of the story of making the movie.

Long: Totally. I mean we shot half of it in my parents house!

Atwood: And we only had the $30,000 from Kickstarter to make it, but we had resources that might be equivalent to more like $70,000 to $80,000 because we had so much practical support from the community.  People were so generous and ready to help us.  It was pretty amazing to have one of our actors say that our on-set catering was the best food they’d ever had on a set, and that was because in spite of our tiny budget, two people from the local restaurant were coordinating and home-cooking almost all the meals.  That food kept our cast and crew really happy, and made a big difference.

Long: I’d say that’s an example of the specialness we found working here. Some combination of that collaborative spirit and just the culture here.

Atwood: And our location budget was $500.

Long: Right, no one in New York believed me when I told them that.

Atwood: Not to mention everything that you pulled together for the hockey scenes.

Long: Oh man. People always say you shouldn’t work with children, animals or boats on your first film. Creating a hockey team is maybe even one step beyond that, but I reached out to my high school hockey coach Larry Tremblay, and he connected me with the rink manager Rick Beauregard at the RI Sports Center, who was awesome. And Larry also brought together about 15 hockey guys who were our players. 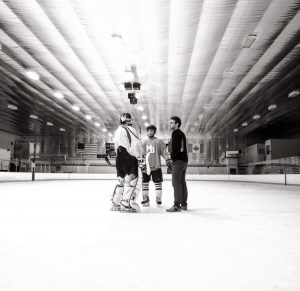 Atwood: And you had to shoot on the ice.

Long: I’d given Brian (Smith, our lead actor) some skating lessons, but just by chance both Greg our cinematographer and Alex our assistant camera knew how to skate.  The first day our goalie was a little late, so I scrounged up some pads at the rink and played goalie for the first few shots. It was a lot of fun.

Atwood: And then we premiered at the Rhode Island International Film Festival just as we were moving here.

Long: Right, we couldn’t move into our apartment yet, so our fellow producer Bruce Mason invited us to crash for a couple weeks.  It was a very special homecoming to have the film premiere here. It played in Jamestown, which is one of the places we shot, so it really felt like completing the experience of making the film in some way.  How does it feel different now, having lived here for nine months?

Atwood: When we moved in, it was a total honeymoon phase, of course.  I was just obsessed with the access to nature, the fact that we live in a neighborhood with beautiful architecture and a very cool and diverse community, one block from a park with a farmers market. But I’m still obsessed with those things!  I think we both feel like our instinct was that this would be a great place for us to make our life and do our creative work, and now we’re starting to feel some affirmation of that instinctual, hopeful notion.  Now that we’re making connections and getting production projects under way, that culture of collaboration is still very striking to me, I think it’s something I’ll always really appreciate.

Aurora Providence is hosting a free screening and release party for The Passing Season on Wednesday, May 10, 2017 at 6:30 pm.  You can also find the film on Amazon and iTunes. Watch the trailer or follow them on Facebook.