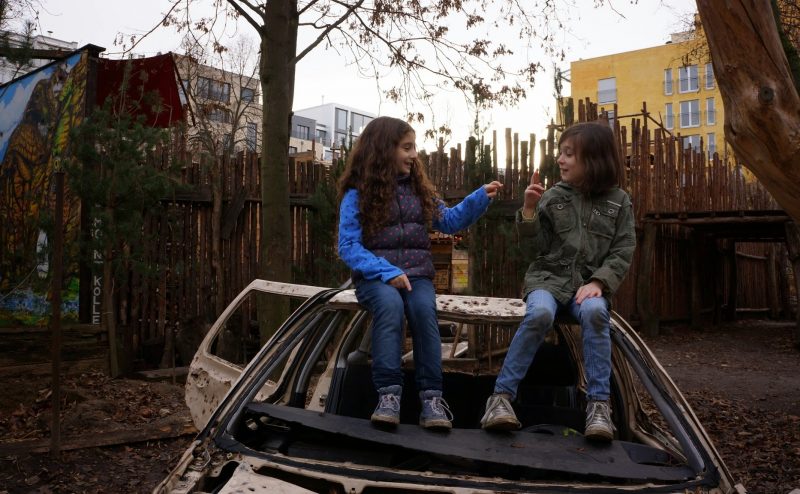 Editor Sabrina Zanella-Foresi explains how she got inside her kids’ minds for the hybrid short film Imagine Kolle 37.

Sabrina Zanella-Foresi shares how she got into the proper headspace to edit the documentary/narrative hybrid Imagine Kolle 37, which is playing at IFFBoston 2017 as part of the “Shorts: D=Delta: Documentary” lineup.

Imagine if kids could play without limits in a special place, without the supervision of their parents. What would that place look like, and what would kids do there? It would probably be a lot like what you’ll see in Imagine Kolle 37, a short documentary-narrative hybrid by NewEnglandFilm.com’s Publisher/Founder Michele Meek and co-producer Elizabeth Donius, playing at IFFBoston 2017 as part of the Shorts: D=Delta: Documentary lineup.

Imagine Kolle 37 is inspired by an adventure playground in Berlin, Germany, where children can build their own huts, make fires, use tools, garden, work with animals, or just play. Meek and Donius take viewers on a whimsical, sometimes animated tour of the space, chronicling the games played by two girls (one played by Meek’s daughter), who imagine a visit to the playground.

NewEnglandFilm.com’s Evan Crean spoke with the short’s editor Sabrina Zanella-Foresi about why she took a break from feature-length documentaries to work on Imagine Kolle 37,  how she put herself inside her own kids’ minds to edit it, and how working in television has expanded her skills as an editor.

Evan Crean: Looking at your IMDb, it seems like you have a lot of experience working on long form documentaries, so what drew you to this particular project?

Sabrina Zanella-Foresi: I was moving from Boston to Cambridge, so the timing was good in terms of doing something short and sweet. I usually work in long format documentary, mostly cinema vérité stuff, but I’ve done some historical docs, a few for American Experience and some independent historical docs. It just felt like the right kind of warm, whimsical, going-into-summer project. When you work on docs that take you months, almost a year, sometimes more than a year, it’s great to do something quick and light, to freshen yourself up.

EC: After that, I could see how it’d be nice to work on something lighthearted.

Zanella-Foresi: Right, I mean I usually work on a project for at least seven months, so to do something in a couple months is just nice.

EC: Wow! Seven months is a lot of time to spend editing a film.

Zanella-Foresi: That’s nothing. As they say, when you write a script for a narrative film, you read it on paper and then you make modifications as you’re shooting it to make the story really work. With documentary, you’re writing it all in the edit room. A director and editor usually build a story structure together while they’re cutting, which is why the process takes so much longer.

EC: That makes sense. What were the differences between your usual process and working on Imagine Kolle 37, other than timeline?

Zanella-Foresi: It always depends on the kind of approach that the filmmaker is taking. Michele had all this really interesting footage, it was very light, and it was children playing in this magical place, that’s unlike anything children experience here in the United States. It really was about trying to look at the space from the perspective of a child and grasp the sense of imagination that comes out of it. That’s what I was most drawn to.

I have seven-year-old twins, so I live in a world where children are making up stories about the spaces that they’re in all the time. I was excited by the interaction of the children and the idea that my children could go into this wild space where they’re kind of uncontrolled, to see what kind of self-control and imagination they would build into the space. I brought my own experience as a parent, being terrified of my children climbing up 20 feet on ladders. I tried to let go of them, and think about the story from the perspective of a kid. 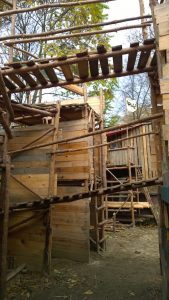 EC: The space is very unique. Was it fun to play with visually?

Zanella-Foresi: As an editor, I was drawn to the stuff that had a sense of scale, that could show you how unpolished the space was: the level of height, the crazy high walkways, and the kind of labyrinthine quality that they have to them.

EC: Some of the film’s first shots are up on those tall walkways. There are also some really tight shots, in small spaces, which create a slight feeling of a claustrophobia.

Zanella-Foresi: Exactly, but those are spaces that the kids love, right? If they ever have a chance to climb into a cupboard, they will. They just do. That’s why this project was so fun. It was like I could get into my kids’ heads for a second and think about what would be exciting for them. Also, it’s fun to watch, because we rarely get to see children play and witness the sense of imagination that they have…This sounds way more like an interview about parenting than it is about editing.

EC: Well, the subjects are very intertwined with this film…

Zanella-Foresi: In this one, for sure.

EC: I’m sure it helped Michele having someone who’s a fellow parent editing the film.

Zanella-Foresi: Yeah, but she came in with a really strong idea about the animation component. She came up with a very talented animator [Natasha Sharpe] to bring that part of the film together. It’s part observational, and then it goes into this crazy animated world. Then it becomes more informational, explaining the idea of what an adventure playground is, and how different it is compared to the way play spaces are structured in the U.S.

In the process of finishing this film, I brought it to my children’s classrooms to just get a sense of what children were seeing in it. They were all really excited by this kind of space. They had endless questions about how they could find a place like that. The kids were excited by the idea of a space with that much freedom in it.

EC: A space with no parents and lots of dangerous things? I don’t see why they would be excited about that…

Zanella-Foresi: [Laughing] No, of course not…

EC: Tell me more about the editing process and collaborating with Michele.

Zanella-Foresi: Every editor/director relationship is different. Sometimes directors will just throw stuff at you and hope you make it into something. Sometimes I work side-by-side the entire time with a director. It depends on the material. In this situation, I met with Michele, we talked about her ideas, and then she left me with the footage to see what I could come up with based on the fact that this was a two-camera shoot.

Ultimately we started with a much longer version, but at certain points it was starting to feel like too much of the same thing. We worked closely together to edit it down. She would come in, and she’d say, “Well what about this?” I’d try something else. It went back and forth, until we start feeling like it worked. She also sent it to some of her colleagues for feedback to see what was working, and what wasn’t.

EC: I’m assuming the next thing you’re working on is similar to your previous work?

Zanella-Foresi: Ironically, no. Completely different. I started cutting a television show for WGBH. I cut a cooking show, which I’ve never done before. I cut most of Season 14 for Simply Ming and now I’m cutting a series for them called Weekend with Yankee. That’s a whole different mode of working. I’ve never worked in short format television, which has its own learning curve.

The way we learn to cut in general is the see-say rule, which is if you see it, you don’t need to say it. That’s how I’ve always cut documentaries, but with a cooking show, they want to see everything you’re saying. I had to undo my brain from a more expressionistic style of editing to one, where you’re trying to add the image and the sound into something bigger. Having to be a literal editor was just a whole different thing.

EC: That does seem totally different. As you were editing the show, did you get hungry when you’re seeing things, or learn things about cooking?

Zanella-Foresi: I learned a ton, and I cooked way more. Let’s just say that if you’re working on a show about duck all week, you crave duck by the end of the week. I cooked a lot of the dishes and learned a lot of little weird pointers while I was working on the show. It was useful for me and I’m a cook anyway, so it was fun. 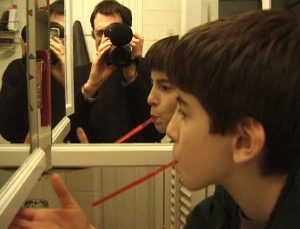 EC: Sounds like a lot of fun to work on.

Zanella-Foresi: It was fun. My kids were psyched.

EC: Oh, I bet. Last question, what’s your favorite project that you’ve worked on so far?

Zanella-Foresi: In terms of my body of work, the person who I was most excited to work with was Ross McElwee. Working with him on the documentary Photographic Memory was an honor, and I learned a ton from him. I studied him when I was in film school, so to work with him was super exciting, because he’s a great cinema vérité shooter and a great writer. In terms of career stuff, that was the most rewarding.

Imagine Kolle 37 will screen at IFFBoston on Saturday, April 29, 2017 at 4:15 p.m. and on Monday, May 1, 2017 at 7 pm as part of the Shorts: D=Delta: Documentary lineup.. To learn more about IFFBoston and to see the festival’s full lineup, visit iffboston.org.