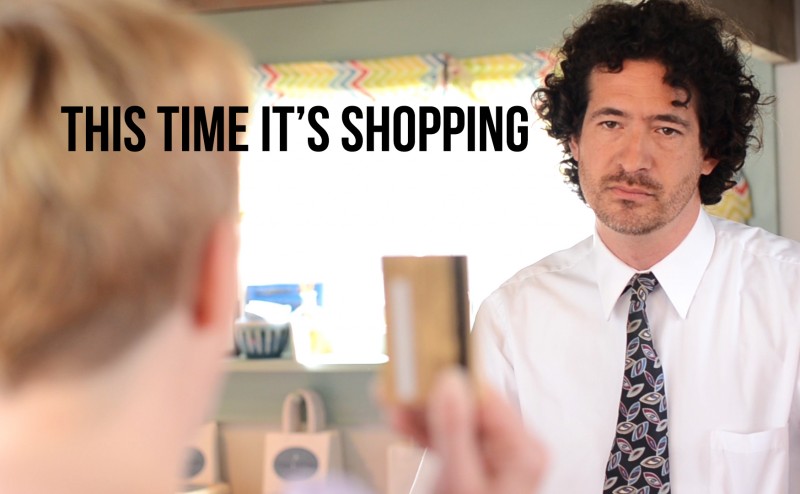 Jim Picariello shares how a game with his daughters led to his family-friendly short This Time It’s Shopping.

Jim Picariello’s award-winning short This Time It’s Shopping is now screening on NewEnglandFilm.com through October 15 as part of the 2016 Online New England Film Festival Here, Picariello shares the inspiration for his family-friendly short and the results of a Q&A he had with children at a film festival.

When you think of plot twists, your mind probably gravitates toward to the likes of M. Night Shyamalan, whose devious twists come seemingly out of the blue. Filmmaker Jim Picariello also employs the plot twist as a narrative device, but he does so in a much more family-friendly way than Shyamalan. Picariello’s short This Time It’s Shopping asks us to ponder how we talk to one another and how simple communication changes as we age, through a unique twist.

The Special Jury Award-winner at the 2016 Providence Children’s Film Festival is now playing on NewEnglandFilm.com through October 15 as part of the 2016 Online New England Film Festival. In the following interview, Picariello reveals the game with his daughters that prompted his short and the adorable results of his Q&A with children at a film festival he attended.

NEFilm: How did you get your start in filmmaking?

Picariello: When I was eight-years-old, I got my friends together and we made terrible films on a Super-8 camera. I would cut and tape edits together on an editing machine from the ’60s. I was obsessed with movies and special effects, but never made the connection that there was a film industry that people could actually work in. I rediscovered my love for filmmaking and script writing just in the last six years.

NEFilm: The story of this film is cute — how did you get the inspiration for This Time It’s Shopping?

Picariello: I used to play “Store” with my little girls, and they would walk around pretending to be what they thought adults acted like. It was so silly, I had always wondered what it would look like if adults acted in that exact way.

NEFilm: Where have you screened the film?

At the Providence Children’s Film Festival, I fielded questions from a packed room full of three to eight-year-olds. It was so sweet, and they asked so many questions about things, such as if I think magic is real… I asked them all if they think magic is real, they all said “Yes!” and I said, “Well, there you go!”

NEFilm: How did you meet your cast and crew?

Picariello: I met my director Chek Wingo and co-actor Jennifer Shepard at a script reading party for a script I was writing, and I knew I really wanted to work more with them. Chek has directed several short documentary films, is an award-winning nature photographer, and serves as audio engineer at the Pierre Monteux School for conductors and orchestra musicians. He grew up in Washington County and graduated from Colgate University. Now he lives in Blue Hill, Maine. Jennifer runs the fantastically entertaining and popular ImprovAcadia in Bar Harbor, Maine.

NEFilm: Do you, or any of your collaborators, have any projects on the horizon?

Picariello: Chek and I will be working on a short comedic film this fall called Passive Aggressive Dads: Traffic Safety. This short will not be as family-friendly.

NEFilm: Do you have any tips about filmmaking you want to share with our readers?

Picariello: Talk with other people who do it and join a local filmmakers group. Try to make the film you can; not the biggest film you want to make. Our film cost our time plus $100 for food and snacks. One of your friends has an iPhone with a 4k camera in it. There are no more excuses not to make your own film.

Watch This Time It’s Shopping on NewEnglandFilm.com through October 15 as part of the 2016 Online New England Film Festival.