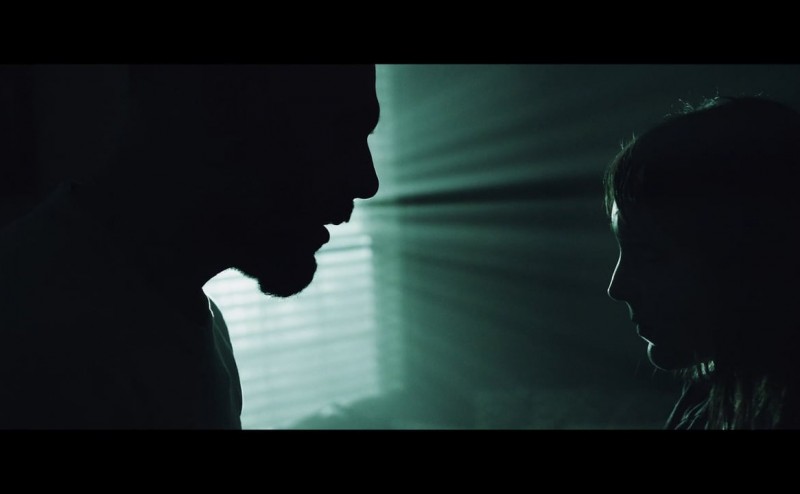 An interview with Jaret Blinkhorn on the basis for his horror film They’re Closing In.

Jaret Blinkhorn’s arguments with his wife inspired the horror short They’re Closing In, where a married couple must confront their issues — or face dire consequences. Here, Blinkhorn shares how he assembled a skeleton crew to shoot his short and offers some advice for aspiring filmmakers. His film is available here on NewEnglandFilm.com through October 15 as part of the 2016 Online New England Film Festival.

They’re Closing In may sound like just another horror film where teens are terrorized by deadly monsters or psychotic killers, but Jaret Blinkhorn’s short offers much more interesting terror. There are definitely monsters, although instead of teenagers, their target is actually a husband and wife whose relationship is on the rocks. In Blinkhorn’s film, tensions mount as the couple is forced to confront their issues, because if they leave, the creatures outside will make them regret it.

Originally screened at the Boston Underground Film Festival, Film4Frightfest, and the Vortex Film Festival, They’re Closing In is now playing on NewEnglandFilm.com through October 15 as part of the 2016 Online New England Film Festival. In the following interview, Blinkhorn shares how he assembled a small crew to shoot the film and offers advice to filmmakers looking to follow in his footsteps.

NEFilm: How did you first get into filmmaking?

Blinkhorn: My dad showed me Creepshow when I was too young to watch Creepshow. Ever since then, I was engrossed by horror films. It wasn’t until shortly after high school, that I tried my hand at filmmaking. I did not go to school; I just Googled how to operate a camera and filmed anything I could.

NEFilm: What was the inspiration behind They’re Closing In?

Blinkhorn: We had just wrapped a 36-day shoot on the feature film The Mind’s Eye and I just wanted to be back on set again with my friends. The story evolved from arguments my wife and I had while I was away on that shoot and she was taking care of our one-year-old daughter.

NEFilm: So your wife wasn’t on set with you — who was?

Blinkhorn: I became good friends with the cast I previously worked with on Almost Human and The Mind’s Eye. Our crew was a skeleton crew in every sense. I operated the camera, and did the lighting and effects, while my buddy Matt held the boom mic. My brother slated and his girlfriend did some hair and makeup.

NEFilm: Have you shown the film at any festivals?

Blinkhorn: The film has played at festivals such as the Boston Underground Film Festival, Film4Frightfest, and the Vortex Film Festival, where it won the Directorial Discovery Award. My fondest memory screening this short was when it was accepted into BeyondFest in LA and I got to see my work on the big screen, in front of an almost sold-out audience at the Egyptian Theatre.

Blinkhorn: We are in pre-production on a horror film, and I have a few scripts and shorts I am trying to find the time for in between shooting weddings.

NEFilm: Is there anything else you would like to people to know about you?

Blinkhorn: I’ve been collecting horror VHS for a long time and have a rental store out of my basement called Blinkbuster Video…It’s pretty badass.

NEFilm: What’s the single most important piece of advice you have for aspiring filmmakers?

Blinkhorn: Make films you can do for no money, make friends that want to help, and do as much as you possibly can in your project because it will save you money and you will learn more positions. Screw Kickstarter, work for your vision. If you get into a festival…GO to that festival. Talk to the other directors or actors, talk to the programmer, buy someone a beer and make more friends. They could need you for something, or you could need them, and at the very least you made a drinking buddy.

Watch They’re Closing In on NewEnglandFilm.com through October 15 as part of the 2016 Online New England Film Festival.