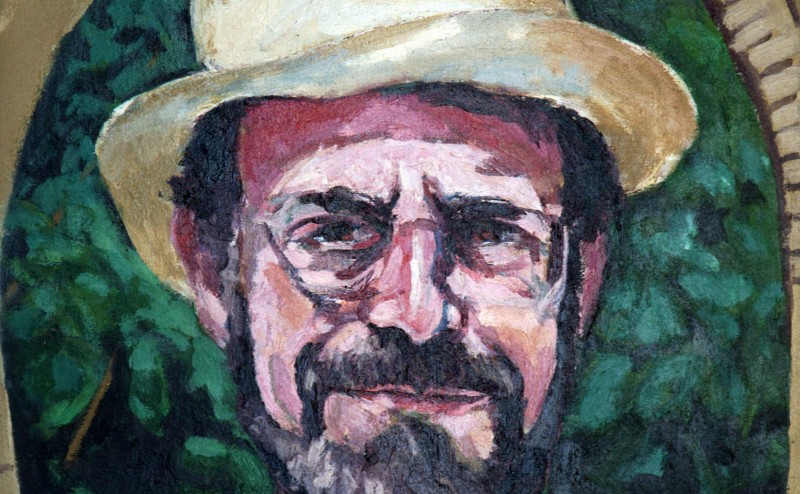 Richard Kane celebrates the life of influential artist Carlo Pittore with his documentary short The Raw Essence of Carlo Pittore. Originally screened at the Maine Short Film Festival, Kane’s film is screening on NewEnglandFilm.com through October 15 as part of the 2016 Online New England Film Festival.

Richard Kane’s aptly titled documentary short The Raw Essence of Carlo Pittore brings viewers inside the mind of artist Carlo Pittore through his paintings and through enlightening interviews, which delve into what made him such a successful artist and an intensely-loved human being.

Originally screened at the Maine Short Film Festival, Kane’s documentary is available through October 15 as part of the 2016 Online New England Film Festival. Here, in our interview, Kane explains why Pittore was such an influential artist and he reveals the emotional encounter that inspired him to turn this short into a feature.

NEFilm: When did you realize you wanted to pursue documentary filmmaking?

Kane: After getting my undergraduate degree at Syracuse University with the expectation that I’d become a lawyer, I took some post graduate film courses at San Diego State University for fun. My sister was working in New York for a documentary film group that came out of NBC News, which got me thinking that I could have a fun and fascinating career making documentaries. I got into a couple of law schools, but realized that making films would be a much more thrilling career. I applied to a grad program in documentary film at Temple University and spent two years learning. After that I had an interview at 60 Minutes and was actually offered a job there, but I chose to take what I felt was a more creative position as a producer/director at a local PBS affiliate in Indiana. There, I started a series of films on Indiana folk life with a very talented ethnomusicologist, Dillon Bustin. Our first film together Tough, Pretty or Smart: A Portrait of the Patoka Valley Boys, won first prize in the short documentary category at the Cork International Film Festival and was short-listed for an Academy Award. That was it. I was bitten by the bug and haven’t stopped making documentaries since.

NEFilm: Where did you get the inspiration for this film?

Kane: The Raw Essence of Carlo Pittore is part of a series of films titled “Great American Artists” launched in 1999. Carlo Pittore was one of the original founders of the Union of Maine Visual Artists, the sponsor of this film series. As his friend, the poet, Bob Holman says in the film, Carlo led a merry band of artists in the ‘70s, living in the yurts of Bowdoinham. Carlo was an internationally renowned mail artist and the postcards he sent around the world and exhibited at over a thousand shows are extraordinary. The influence he had on so many other young artists was deep. His immense persona and the vulnerability that lies just below the surface of Carlo and many artists, is very much a part of this portrait. It is with the hope that the release of this short will encourage others to help us fund a feature-length documentary about this very complex artist.

Much of the live action footage of Pittore was shot in 1995 by student and lifelong friend Matt Ruskin. He captured Carlo at the pinnacle of his powers as a painter and teacher of the Carlo Pittore Academy of Art. What Carlo did for the figurative arts was extraordinary. According to Jonathan Katz, curator, and founder of the Harvey Milk Institute, Carlo changed the way we define beauty in figurative art. Many people compare Carlo’s work with the work of Lucian Freud and Alice Neel, and surely those two painters employed a kind of rawness and honesty about the human figure as Carlo did.

NEFilm: Where did you have the opportunity to showcase your film?

Kane: A shorter version of this film was screened for a group of supporters of the Carlo Pittore Foundation for the Figurative Arts. It was at the opening of an auction of Carlo’s works. I recall one of Carlo’s students bawling uncontrollably along with several others inside the screening. This experience led Rob Shetterly and I to dedicate ourselves to making a feature-length documentary of Carlo’s life. In an effort to get more attention for the project, we produced this eight-minute version, which premiered as part of the Maine Short Film Festival in 2016. We still have a great desire to complete the feature.

NEFilm: Who did you collaborate with on this project?

Kane: My partner in the project is Robert Shetterly, the president of the Union of Maine Visual Artists, and a very deep thinking political artist who knew Carlo from the founding of the organization. Rob and I met with the Carlo Pittore Foundation for the Figurative Arts and learned of footage that had been shot in 1995 by Carlo’s close friend, Matt Ruskin, a very successful New York filmmaker. Much of that footage made it into the film, along with interviews we did with artists and poets who knew Carlo. Unfortunately I never met Carlo, since he died in 2005.

NEFilm: What advice do you have about documentary filmmaking?

Kane: Make friends with your subjects. Get their confidence. And as Albert Maysles once told me, “Capture the private moments.”

NEFilm: What projects do you have coming up next?

Kane: I just released my latest feature-length documentary titled Ashley Bryan’s World. It premiered at the Maine International Film Festival in July. I’m also in post-production on my latest documentary on a pioneer in the metal art world, J. Fred Woell: An American Vision. It will be released at the end of the 2016.

Watch The Raw Essence of Carlo Pittore on NewEnglandFilm.com through October 15 as part of the 2016 Online New England Film Festival.