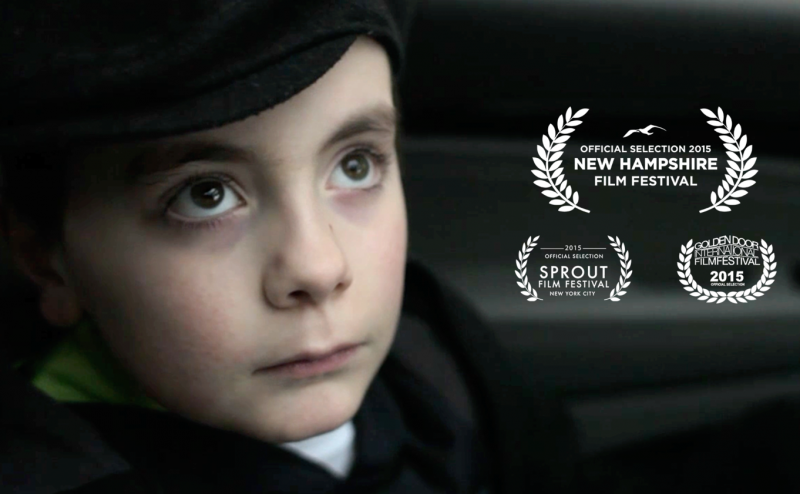 An interview with Matt Russell on the parallels between winter weather and loss in his short Delià.

Writer Matt Russell explains the parallels between winter and loss in his short Deliá, while also sharing why the project succeeded as a family affair. The film, which won the New Hampshire Film Festival’s Best Short Drama award in 2015, is now screening on NewEnglandFilm.com through October 15 as part of the 2016 Online New England Film Festival.

There are parts of New England reserved for the recluse: snowy getaways that provide isolation for those who wish to retreat from society. Matt Russell’s short Deliá paints the portrait of one such recluse, who is coping with the aftermath of a hunting accident. Russell uses the icy New Hampshire landscapes depicted in the film as a metaphor for the unfathomable pain this character experiences.

Russell’s award-winning short Deliá, is now screening on NewEnglandFilm.com through October 15 as part of the 2016 Online New England Film Festival. In this interview with NewEnglandFilm.com, he explains the parallels between winter and loss in his short, while also sharing why the project succeeded as a family affair.

NEFilm: How did you get into filmmaking?

Russell: I started out acting, which I still find great satisfaction in doing. Filmmaking has exceeded that in a lot of ways though, because of its collaborative aspects. Actors are crucial to the filmmaking process, but now I understand that they are no more crucial than the cinematographer who shoots them, the gaffer who lights them, the sound guy who allows us to hear them, or the director, who brings everything together and allows the actors to channel the story. There’s nothing better than working with a crew that understands this concept of ‘We are all working together, combining our own individual talents to create something great.’ It’s a unifying experience that I’ve really grown to appreciate and always want to be a part of. I did not go to film school, so my teachers have mostly been the people I’ve worked with. I’ve been lucky enough to work with some very talented filmmakers.

Russell: Although I’m currently based in Los Angeles, I grew up in New England and always wanted to film something back home. Since we don’t get much snow out here and the story I came up with involved a lot of snow, I thought this would be the perfect opportunity to film at home. I had lots of ideas floating around, but the actual script came to me on a flight from LA to Boston. My inspiration for this film was a combination of the rich culture of New England that I had grown up with, as well as a fascination with loss, and how people come to deal with it in different ways. I knew the rugged beauty and icy winter landscapes of New Hampshire could provide a parallel to what the character was feeling inside: cold, raw, and isolated. As dark as the subject matter may be, there is a certain beauty and solace that nature around him provides.

NEFilm: How did you gather a cast and crew for the film?

Russell: Once the script was complete, the first person I looked for was a cinematographer. I was referred to John Garrett, a Maine-based director of photography (DP). Once he got a better understanding of the mood I wanted to achieve, he recommended that I talk to his friend Thomas Scott Stanton. Out of the blue, Scott mentioned a short film which happened to serve as inspiration for this story, so I knew he would be perfect to direct. His wife Kaili is a talented actress who I thought was perfect for the role of the sister. Kaili also works in production design so she took on that behind-the-scenes role as well. With the ball rolling I was able to lock down our shooting locations, but was still looking for a couple of our younger actors. That’s when John simplified things by bringing along his son, Tyler Garrett, to play the boy at the cemetery. At this point the film had really become a family affair and that energy was evident throughout the whole filming process. I credit this for being the reason everything worked out in the end.

Russell: The film was shown at the Director Guild Theater in LA and also in NYC as part of the International Cinematographers Guild 2015 Emerging Cinematographer Awards, for which our DP John Garrett was awarded for his work. It then screened at Camerimage in Bydgoszcz, Poland. Although these were incredible honors for the film, the most personal experience for me was screening it at the New Hampshire Film Festival back in October. Since we made the film in NH, it was really a full circle experience for us to be a part of that festival. Receiving the Best Short Drama award was the icing on the cake.

NEFilm: Do you have any projects in the works right now?

NEFilm: With little formal education in filmmaking, what sort of advice would you give to those pursuing your career path?

Russell: I think a lot of it is just jumping in and getting to the work. So much of it is learning from your own mistakes. I’m not sure I can give too much advice as I’m still learning so much myself.  But I think if you believe in what you are doing and if you find a team who you trust and who trusts in you, then that great creative energy will start flowing and something interesting will come of it. I’m a strong believer in having a plan, but also being adaptable as there will always be so many variables thrown your way. It’s important to be able to embrace these unplanned, uncontrolled moments because more often than not those will be the most authentic and the most honest moments you’ll capture. They will be what sets your film apart.

Watch Deliá on NewEnglandFilm.com through October 15 as part of the 2016 Online New England Film Festival.