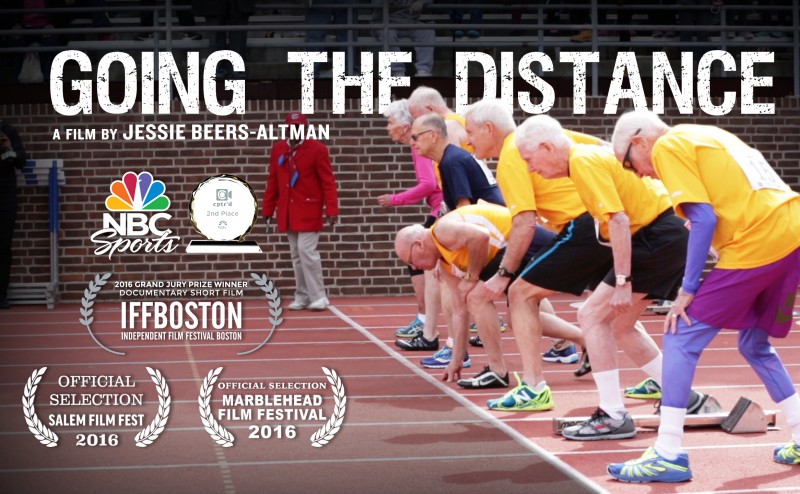 An interview with Jessie Beers-Altman about the unconventional athletes that spurred her documentary short Going the Distance.

Written by Nichols | Posted by: NewEnglandFilm.com

Jessie Beers-Altman shares the inspiration for her sports documentary short Going the Distance and the unique soothing effect it has on her infant son. Her award-winning film, which originally screened at Independent Film Festival Boston, is now available here, playing through October 15 as part of the 2016 Online New England Film Festival.

Normally sports documentaries focus on the best and brightest athletes in their struggle to achieve perfection, but sometimes they can be just as inspiring, if not more so, when they concentrate on unconventional athletes struggling simply to compete. Jessie Beers-Altman’s documentary short Going the Distance is one such documentary — its chronicle of elderly athletes who compete in the Penn Relays, serves as a poignant reminder that it is never too late to live out your dreams.

Originally screened at Independent Film Festival Boston, where it won the Grand Jury Award for documentary shorts, Going the Distance is now playing through October 15 as part of the 2016 Online New England Film Festival. In this interview with NewEnglandFilm.com, filmmaker Jesse Beers-Altman shares her motivation for making the documentary and the unique soothing effect it has on her infant son.

NEFilm: How did you get your start in film?

Beers-Altman: I earned my MFA in Film Production at Boston University in 2008, but by then I had already been making films and honing my editing skills for about a decade. I taught myself how to edit by editing highlight reels for my college soccer team at Georgetown. We had a rough season my senior year, so I didn’t have many highlights to work with! I had to get creative with the film and in doing so, I realized this was a process that I wanted to forge into a career.

NEFilm: How did you find the subject matter for Going the Distance?

Beers-Altman: In 2004, I watched 101 year-old Everett Hosack compete in the Masters Men’s 100-meter dash at the Penn Relays. Almost more incredible than the feat itself — was the response of the spectators. More than 50,000 fans — most of them there to see professional and Olympic runners compete — were on their feet, cheering their hearts out for the diminutive centenarian as he sprinted towards the finish line. It was a sight I will never forget, and I knew it would make a great short film to capture the spirit of this special event at the Relays.

NEFilm: So how did you go from watching the Penn Relays to documenting them?

Beers-Altman: I had been in touch with the directors of the Penn Relays for a while; they knew I wanted to make a film on the Masters Men’s 75 and over 100-meter dash. When they found out that the first-ever woman would be competing in the race they contacted me to let me know. I only had about two weeks to find my other characters, which I did by consulting with Masters running experts and enthusiasts who knew the competitors.

NEFilm: How has the film been received?

Beers-Altman: The film placed 2nd in NBC Sports’ Cptr’d Competition. It was selected out of almost 1,000 films, and screened on the NBC Sports Lawn at the SXSW Film Festival in Austin, Texas earlier this year. It also screened at the Salem Film Festival, the Marblehead Film Festival, and Independent Film Festival Boston, where it won the top prize for short documentaries.

Beers-Altman: I have a few things up my sleeve…however, these days though I am keeping busy taking care of my infant son. I edited Going the Distance while I was pregnant with him. You know how expectant mothers will play Mozart to their child in utero? Well, my son heard my film over and over and over again while I was editing it. I learned soon after his birth that if he ever got fussy, all I had to do was play my film and he’d calm right down. He was used to the sounds of it, after hearing it so many times during the edit!

NEFilm: Since you’re not quite ready to share your future projects, do you have any advice for aspiring filmmakers instead?

Watch Going the Distance on NewEnglandFilm.com through October 15 as part of the 2016 Online New England Film Festival.