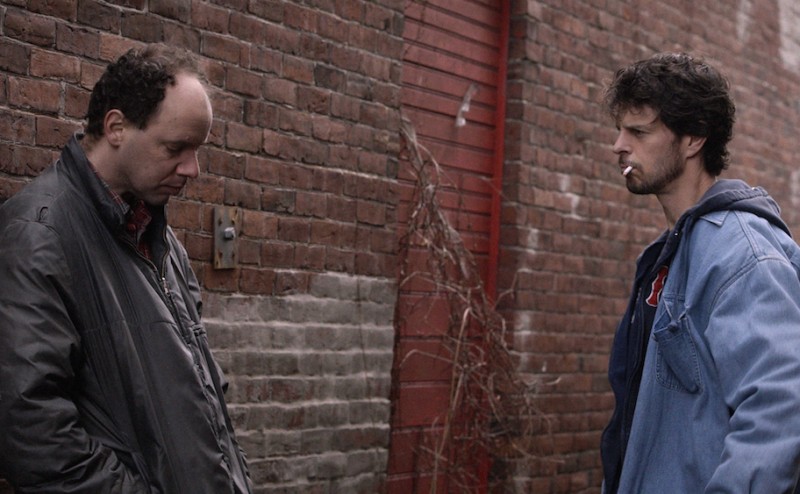 Brian Gold, portrayed by Doug Lockwood falls for the bait set by his cousin Tom Rourke, portrayed by John Trent for a seemingly innocuous act of revenge which has unexpected and disastrous consequences in The Chain.

NewEnglandFilm.com spoke with Bérubé about making The Chain, which screens this week at the inaugural Live Free or Die Film Festival.

The Chain, produced and edited by Manchester, New Hampshire filmmaker Daniel Bérubé, will be kicking off Day 1 of the inaugural Live Free or Die Festival. An example of what he calls “unhurried filmmaking,” the narrative drama pays homage to film noir and is based on an original story by Tobias Wolff. Filmed in New Hampshire, the film follows the chain of events that ensue after a father saves his daughter from an attack by a neighborhood dog—a psychological breakdown of a man as his scheme for revenge takes unexpected turns and results in disastrous consequences.

NewEnglandFilm.com spoke with Bérubé about making The Chain and returning to his New Hampshire roots.

Carol Robidoux: When did you first encounter Tobias Wolff’s short story, and why did it capture your imagination?

Daniel Bérubé: I was already familiar with Tobias Wolff through This Boy’s Life, Wolff’s memoirs about growing up in the 1950s, which was made into a film of the same name in 1993 starring Robert DeNiro and Leonardo DiCaprio. I loved that film. But it was an introduction by a fellow filmmaker friend to Noël Dow Barlow, who was very passionate about adapting Wolff’s The Chain into a short film.

Noël and I met when her previous film, Giddy In Love, premiered at the Somewhat North of Boston (SNOB) Film Festival in Concord, NH. We found we shared a lot in common, and I agreed to meet with Noël back in Boston to read her script and listen to her directorial vision of the film. Noël shared that she was interested in remaining true to Wolff’s original story, and to convey a hollow and raw visceral feeling of non-resolution to the story.

I was hooked when Noël shared with me that she wanted the soundtrack to be “visually important” to the story, to give a first-person point of view, that much of the story was taking place inside the mind of main character Brian Gold. With much of my earlier filmmaker experience as a sound recordist and sound designer and as an editor I saw a tremendous opportunity to bring that creativity into the project to tell the story.

CR: What were the particular challenges to translating a short story to film?

Bérubé: In creating a short film out of Wolff’s original short story, our main challenge was that we wanted to “show versus tell” and convey what the actors were thinking through their eyes and expressions rather than reliance on dialogue. Keep in mind that the story is told in first-person, so it takes place mainly in the main character’s head. We wanted to stay true to Wolff’s story. It presented us with an enormous creative opportunity with the use of sound design and unhurried pacing.

From the very beginning of development, we discussed the use of organic sounds. When on set, I consider natural production audio very important—it’s always a challenge to recreate the natural ambience. And, after being on set and experiencing a scene in real life, I sometimes get to the editing room and feel almost short-changed that we can’t give the audience the same powerful experience that we had on set. That soundscape is a critical element in bringing a viewer into the film. When it came time to work on sound design with sound designer Michael Houston, it was important to emphasize (and add) those natural elements into the soundscape: radiator clicks, refrigerator hums, passing cars. We felt that created a very “full” sound, without being contrived or on-the-nose. It envelops the viewer in a very sensitive atmosphere: that cold, quiet, New Hampshire winter.

CR: How did you get your start in filmmaking?

Bérubé: I started out editing Super 8 film when I was quite young, after our parents gave my twin brother and I a camera. I was also editing audio using cassette tapes. We even had a studio and a dark room set up in the basement.

Although I dabbled in filmmaking, I was primarily an artist growing up. Then — I feel a little funny saying this — I saw Star Wars, not just once, but dozens of times. I was intrigued by the creativity and work that went into it. I was so inspired that I gave up the idea of going to art school and gradually went to Emerson College to study film. I really liked the sound design part of filmmaking while at Emerson, and subsequently traveled all around the world to produce sound for a PBS series after I left Emerson. Marcel Foley (portrayed by Michael Bordénave) comes to the aid of Brian Gold (portrayed by Doug Lockwood) as Brian begins his descent into the unraveling of his character in The Chain.

CR: What brought you back to your NH roots, and how will that guide your filmmaking, going forward?

Bérubé: Many reasons. Filming in New Hampshire offered us the artistic backdrop that Noël was looking for — cold, bleak, rustic, back-country. And since I was born and raised in New Hampshire, I knew the state very well. That was such an advantage when it came time to location scout. And the state was so welcoming to us — almost everyone who saw us filming was more curious than furious. It was a great experience making the film there. Very natural.

I’ve since moved from Boston back to my hometown of Manchester, and I’m thrilled with what I believe to be wonderful opportunities to create in our state. I’m passionately involved with arts and culture, and filmmaking in New Hampshire. I’m now an arts commissioner with the Manchester Arts Commission. I’ve also been appointed to serve on the New Hampshire Film and Television Commission, and I joined the team at the New Hampshire Film and Television Office, that produces our State’s annual New Hampshire High School Short Film Festival, celebrating it’s 10th anniversary in 2017. Through Bérubé Pictures I look forward to collaborating with many filmmakers interested in bringing their projects to New Hampshire.

CR: What is your best advice for aspiring filmmakers?

Bérubé: Building community is part of my passion [Bérubé is also founder of the Boston Creative Pro User Group] and it fuels my internal wellness. This industry is all about relationships, because you never know whom you’ll work with next. Learning to be a decisive collaborator is key to being successful as a filmmaker. So I encourage all aspiring filmmakers to remain true to your creative visions while learning to work with other creatives to help tell their stories, and yours. Films get made by many people, not just by one person, so it’s important to get yourself out there to network and work with others to build relationships you can continue to depend upon, from one project to the next.

Read the related article about the Live Free or Die Film Festival on NewEnglandFilm.com.

Click here for tickets to the two-day Live Free or Die Film Festival, Aug. 12. & 13 at the Palace Theatre, Manchester, NH

For more on Dan Bérubé, ‘The Chain,” and Berube Pictures:

Carol Robidoux is a freelance journalist and former newspaper reporter. She is founding Editor of ManchesterInkLInk.com, a hyperlocal daily news and information site for the Greater Manchester, NH, area.