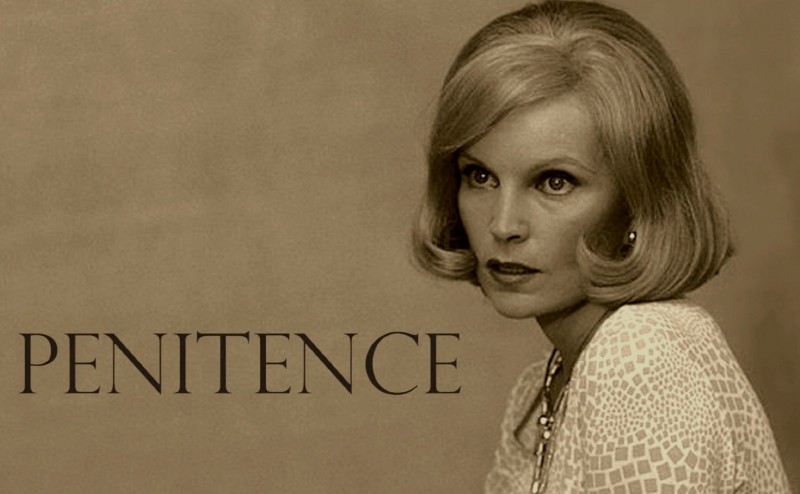 Getting it Right the First Time

First-time Pawtucket, RI filmmaker Carol Conley exorcises demons with her short Penitence, screening at the Rhode Island International Film Festival this month. NewEnglandFilm.com talks with Conley about how she came up with Penitence, her process as a first-time filmmaker, and the reasons why this project is so important to her.

First-time filmmaker Carol Conley kept the idea for her short Penitence sitting in a drawer for years until she found the inspiration she needed to complete it – the right actor. Once Conley met the woman she wanted for her lead, she set out to refine her idea into one that she hoped would capture the actor’s interest.

She shot Penitence over the course of the day, but Conley spent hundreds of hours editing the film, which will be screening this month at the Flickers’ Rhode Island International Film Festival (RIIFF), which runs from August 9-14, 2016.

NewEnglandFilm.com talked with Conley about how she came up with Penitence, her process as a first-time filmmaker, and the reasons why this project is so important to her.

Evan Crean: What inspired you to make Penitence?

Carol Conley: I had the idea about 10 years ago and I brought it up to my boss who’s a filmmaker. He said ‘That’s really interesting. You should write that down, since it would make a good short.’ I did, but at the time it didn’t really work for me. I stuck it in my drawer, and every year when I cleaned my desk I’d pull it out and look at it. It was just never exactly what I wanted, but I’d tweak it a little bit then return it to the drawer. Then, in 2014 at the Rhode Island International Film Festival, I met Marlyn Mason and immediately thought that she would be perfect for the lead. After the festival that year, I thought I would work on the script with her in mind as Maggie. If I ended up with something I liked, I planned to ask her to take a look at it if I saw her again in 2015. That’s exactly what happened. I shared it with her and had a positive response within minutes. It was very exciting!

EC: Very cool. Was this your first time writing a script?

Conley: I had never written a script before. I had never written anything before! I’m incredibly fortunate that I had a wonderful cast and crew. My assistant director Jonathan Schermerhorn was just so instrumental in helping me turn it into a workable shooting script. I had a great producer and everyone on my production team was top-notch. They really made the film look good.

EC: That’s awesome that you had such a great support system. How would you describe the film?

Conley: It’s very dark. On the surface, it deals with a man who has just gotten out of prison confronting the dying woman he believes set him on his path to destruction. Because of an interaction they had in the past, he feels his life was ruined. This is his last chance to confront her as she is dying of cancer. But there are many layers to the story and many ways to interpret it. Personally, I’m a cancer survivor and that experience was one of the things I dealt with in this film.

EC: It sounds very personal. Was it inspired by thinking about what you would do if you had a limited amount of time to square things away with people?

Conley: Yes, that was part of it. I also had a very personal experience when I was young that I had never reconciled. The film helped me with that.

EC: Was this type of personal material difficult for you to put out there? Was it difficult to process as you were doing it?

Conley: It was very difficult, and it’s difficult to watch. But I hope that every viewer will take something different and personal from it. Some have found it very powerful, others too disturbing.

EC: So responses have been all over?

Conley: I’m a very positive, optimistic person. I’m grateful for the chance I’ve been given at life after not knowing whether I was going to survive my illness. Every day is a gift. I’m happy and delighted to be here. It has definitely surprised people that I would do something dark like this. They’ll look at me and say, “Where did that come from?” (Laughing)

EC: (Laughing) That was actually going to be my next question, whether this type of film was one you would normally watch, or if this was out of left field for you.

Conley: Yes, it was totally out of left field. I don’t normally like subject matter that makes me uncomfortable.

EC: So now that you’ve made your first film, how does it feel?

Conley: It was very exciting. Also, although most of my crew and leading man were young, Maggie (Marlyn Mason), was 75 at the time of the shoot and Bobby’s mom (Ellen Becker-Gray) was also in her 60s. It was a unique experience, three mature women and these amazingly professional young people. We all worked together extremely well. We shot over 11 hours in one day and it couldn’t have gone better. It was probably one of the best days of my life. Editing, though, was very tough. I was there for every second of it. My editor, Orlando Santos, and I put in almost 300 hours.

EC: That’s a lot of time! Was it due to a steep learning curve?

Conley: Yes, because I didn’t know anything about editing and wanted to learn. Orlando was so patient with me. Everything that I asked for, we tried. Some things worked, but some didn’t and we’d have to go back to the drawing board. Even as I view it now, there are things I might change, but overall I think it’s a pretty watchable film, so I’m pleased.

EC: I’m happy to hear that. Now that you’ve been through this experience, do you have ideas for other films that you’d like to work on?

Conley: I don’t yet. The editing was finalized not long ago, so I really haven’t had an opportunity to think about anything else yet. But I did read a wonderful book that was self-published by a woman in Chicago. I reached out to her and told her how much I loved what she had written and asked her if her book had been optioned for a screenplay, and she said ‘no,’ so I’ve been considering pursuing that.

EC: Excellent. Are you able to share the book’s genre? Is it similar material?

Conley: It’s a very cool rock ‘n roll love story with an edge. I was thinking of it with Penitence‘s male lead [Don Martone] in mind, because not only is he an incredibly talented actor, he’s a musician, too. What I asked him to do in my film was just so difficult, but he and Marlyn nailed it. They’re wonderful together.

Carol Conley’s short Penitence screens at the Flickers’ Rhode Island International Film Festival, which runs from August 9-14, 2016. To learn more about the festival and when the short will be playing, visit www.film-festival.org.

Evan Crean is a film critic in Boston and a founding member of the Boston Online Film Critics Association (BOFCA). He co-hosts the weekly movie podcast Spoilerpiece Theatre and is also the marketing director for Boston Reel, a site dedicated to Boston’s independent film culture. You can learn more about his work at www.reelrecon.com.