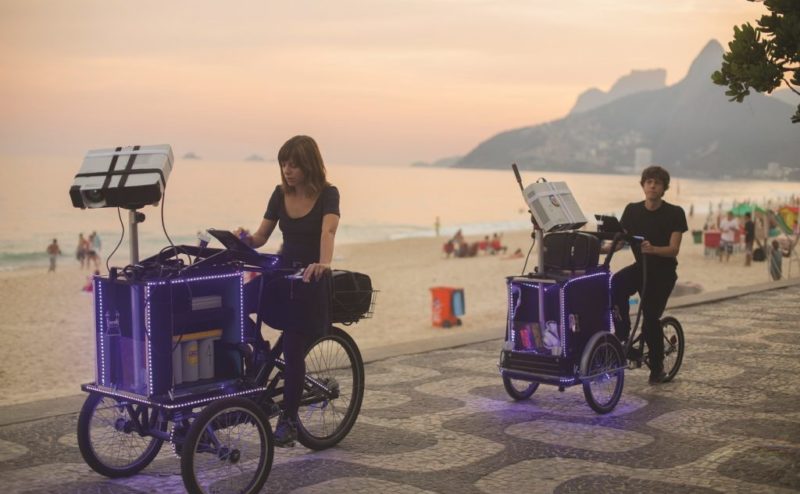 Animation workshops with Ygor and Ceci of VJ Suave at the Maine International Film Festival this month.

Happenings, industry buzz and call for films in the New England film industry.

The Maine International Film Festival runs July 8–17 in Waterville. Screenings will take place at the Railroad Square Cinema and the Waterville Opera House. Special events include a screening and Q&A of documentary I Know a Man… Ashley Bryan, about the Maine resident and children’s author/illustrator. For a list of films and more details, check out miff.org.

Movies on the Block returns to Grant’s Block (260 Westminster Street) in Providence, Rhode Island on Thursday evenings at sundown. Screenings are free and weather dependent. Watch Pink Floyd the Wall on July 7th, Spaceballs on July 14th, The Silence of the Lambs on July 21st, and The Hunger Games on July 28th. For the full schedule and updates, check out moviesontheblock.com.

Allons-y! The Museum of Fine Arts hosts the Boston French Film Festival July 7–24. Full and half passes are available. Screenings include Fatima, The Innocents, Seasons, and Vincent. Purchase tickets and learn more here.

NewportFILM presents outdoor screenings throughout the state this summer. Films screen at several different venues. This month, catch The Music of Strangers on July 7th, The Weekend Sailor on July 14th, Life, Animated on July 21st, and Jim: The James Foley Story on July 28th. For more details, click here.

The 39th annual Boston/New England Emmy Awards were held in Boston last month. For a list of winners, click here.

Rhode Island International Film Festival and the Rhode Island Film and Television Office present the series doubleFEATURE on Rhode Island PBS this month. The series will feature films that have premiered or screened at Flickers. Read more here.

The Camden International Film Festival’s Point North Fellowship is open for applications for nonfiction projects until July 14. The Points North Fellowship includes a $2,000 grant, all access passes to the Camden International Film Festival, five nights of accommodations for two during the festival, a round trip flight to Maine, and more. See their website for more information.

The New Hampshire Film Festival is accepting submissions until late entry deadline of July 15th. For guidelines and to submit, click here.

The Vermont Filmmakers’ Showcase is now open for submissions from Vermont filmmakers. Deadline is July 23rd. Submit an application and learn more about the event here.