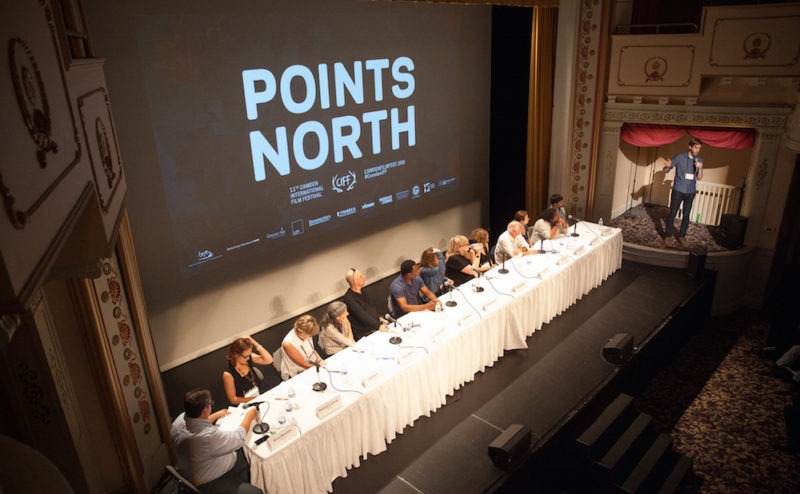 Camden International Film Festival announces the launch of the Points North Institute, a year-round institute poised to be a launching pad for the next generation of nonfiction storytellers.

Camden International Film Festival announces the launch of their Points North Institute, a year-round institute poised to be a launching pad for the next generation of nonfiction storytellers. The institute’s retreats, residencies, fellowships and grant programs will provide a full spectrum of resources for nonfiction filmmakers and media artists.

In 2005, the first Camden International Film Festival (CIFF) took place, hosting 22 nonfiction filmmakers from around the world, including Albert Maysles who was recognized for his lifetime achievement to the form. The founders chose to focus the festival on documentaries, in particular, because they felt “energized by the artists working within the form.” And the location in midcoast Maine seemed a perfect fit due to the area’s “long history of being a creative space for artists,” as Founder Ben Fowlie puts it. Only a bit over a decade later, the festival has grown into one of the most prestigious documentary film festivals in the country. They’ve partnered with the Tribeca Film Institute and created artist support programs including the Points North Fellowship and the Camden/TFI Retreat presented by CNN Films.

This month, they announced the launch of their Points North Institute, a year-round institute poised to be a launching pad for the next generation of nonfiction storytellers. For the institute, they plan to expand their operation of retreats, residencies, fellowships and grant programs, which provide a full spectrum of resources for nonfiction filmmakers and media artists. They will also continue to enhance the annual Points North Forum, a three-day conference that takes place during CIFF and includes master classes, workshops, panels, one-on-one meetings and the popular Points North Pitch.

“In all our artist support programs, we’ll seek out filmmakers and other media artists who are early in their careers and who may not have the benefit of established industry connections or proximity to major media centers like NY and LA,” says Institute Co-Founder Sean Flynn. “It’s very important for us to be a part of diversifying the field by supporting more minority and female artists.”

In their goal to diversify, they also seek to stretch the boundaries of documentary form. For this reason, as part of the upcoming 2016 festival, CIFF will host a virtual reality workshop in collaboration with the Maine Media Workshops.

“While documentary film is at the core of our work, we also want to take a broad view of the changing media landscape, highlighting evolving forms and platforms for creative nonfiction storytelling like VR and podcasting. So we’ll always be looking where those boundaries are in the documentary field and what we can do to expand them,” says Flynn.

The new Points North Institute will be open to filmmakers worldwide, but the festival remains firmly tied to the New England community, as well.

“We like to think of New England as our core local community,” says Fowlie. “Like Maine’s connection to the visual arts, Boston and New England have such a unique relationship to exploring the documentary form through institutions like Harvard and MIT. We look at our festival as an extended campus in many ways, and are always looking for opportunities to engage with the local filmmaking community.”

It is for this reason that CIFF maintains partnerships with universities like Emerson College and UMass Boston, and organizations like the LEF Foundation.

“I believe we all share a common interest in supporting work from artists who are committed to exploring the documentary form through their work, which is a great starting point,” says Fowlie. “From there, we’re able to build experiences and opportunities for filmmakers living and working in New England to engage with the great documentary community in an intimate, cost-effective environment.”

For more information about the Points North Institute, including the current open call for the CMG Action Grant, providing up to $10,000 for a short-form environmental doc, see http://pointsnorthinstitute.org/.