Actor/Producer/Activist and Women in Film Video New England Board Member Chuck Slavin interviews Alecia Jean Orsini Lebeda for an installment in his series, The DotCommentary, to discuss her work in the local film industry and her vision for WIFVNE. 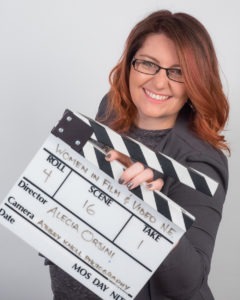 In Orsini’s first letter, she announced that she would be traveling throughout New England on a “listening tour” in order to hear “your needs, hopes and ideas about filmmaking and how we can improve the landscape for women.”

Orsini recognizes the need for men and women to work together on facing gender inequities in film and television. “WIFVNE is focused on women’s issues, but change will not happen with women alone. Conversations among the sexes will bring about true change and understanding. I am asking our male counterparts to become engaged, and help us move forward.”

Here, Actor/Producer/Activist and WIFVNE Board Member Chuck Slavin interviews Orsini for an installment in his series, The DotCommentary, to discuss her work in the local film industry and her vision for WIFVNE.

Chuck Slavin: Alecia, what do you do?

Alecia Orsini Lebeda: I am a Producer—I am the CEO of Good Natured Dog Productions, a video production agency that makes commercials and short films, and staffs feature length films in the region. We have a lot of fun doing what we do. I also work for Geek Girl Tech Con, traveling the country teaching technology to women (and men) of all ages. (We have an Event in Boston April 7th & Cape Cod April 9th). I am also one of the grassroots organizers of Save MA Film Jobs, and work at my Local NPR station.

CS: What brought you to Massachusetts?

Orsini: I grew up here! I went away to school at the Savannah College of Art and Design in Savannah, Georgia. After getting a BFA in Film & TV, eventually I found my way back to my native land, making films in my own backyard. (I’m a New England Girl through and through!)

CS: What’s your involvement with the SAVEMAJOBS and the grassroots campaign, and I’m not going to include any answer with “worrying a lot”?

Orsini: When Kate & Geoff started SMFJ, I offered my services of social media management to create and manage the Twitter & Instagram accounts, along with keeping a watch on the Facebook page. Since then, my role has evolved to Administrator with Zach Lazar. We keep on top of the information coming from the Massachusetts Production Coalition, and the state and help our fellow filmmakers stay connected. Really it’s like cleaning the living room of our collective film family household. Everyone contributes, we just do the dusting.

CS: As a fellow board member of Woman in Film and Video in New England it was an honor to vote for you as President. What got you involved in WIFVNE?

Orsini: Having been a Girl Scout my whole life, I cherish my sisterhoods and working on behalf of women. I joined WIFVNE to grown that sisterhood of filmmakers in my own life, and it’s been very rewarding. Being in a very male dominated field, it was nice to connect with women who also work in the industry. It is also great having this platform to talk about the inequalities facing the film industry, and bringing all parties, men and women, together to work on solving those problems.

CS: Why did you choose to be President?

Orsini: “Help where I am needed” is a tenet of being a Girl Scout. I wanted to bring all my producing, teaching, and community organizing skills to one office, and the opportunity to do so came up when I joined the board of Women in Film. This is a great dedicated group, who are juggling everyday issues, on top of the freelance life that film, television and media generally dictate. Yet the board still finds time to work on everything WIFVNE, which is inspiring. With the encouragement of the board, I took on the presidency, to be the most help to the board this time. It’s an honor to do so.

CS: What are your future goals?

Orsini: In the future, honestly I’m hoping to grow this organization! I am hoping to hear from women and find out what we can do to help them with their craft, and have them join us making the landscape for Women in Film better across the board. Personally, I am working on producing a feature film from Good Natured Dog Productions, and gearing up for the busy season for film.