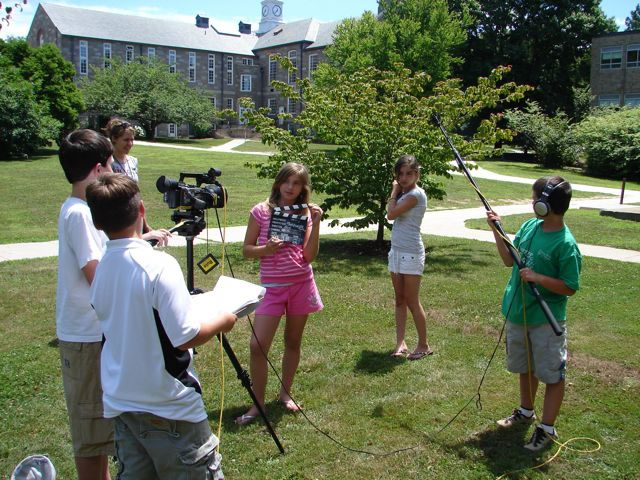 Campers at the KidsEye Filmmaking Camp in Rhode Island.

Choosing the right film and video programs for children and teens in Connecticut, Rhode Island, Vermont, Maine, and Massachusetts.

NewEnglandFilm.com has compiled some of the best summer film programs in New England for young people who want to get a jumpstart on their careers, or even their future hobby.

It’s never too early to become a filmmaker, in our opinion. And fortunately in New England, you’ll find plenty of programs for children and teen media artists — from one week day camps to full summer sleepaway camps. Here, NewEnglandFilm.com compiles some of the best summer film programs in New England for young people who want to get a jumpstart on their careers.

In its 18th year, the KidsEye™ is an intensive and fun five-day summer camp held at the University of Rhode Island in Kingston, RI that exposes young people to the basic elements of the filmmaking process, culminating in a premiere screening of their finished work. The film that the children shoot will be screened for family and friends at a specially arranged screening called the “Red Carpet Premiere” in August during the Rhode Island International Film Festival.

This day camp offers programs in Intensive Filmmaking/Acting and Special FX/Animation for 8 to 17-year-olds. Campers work with award-winning professionals to develop the key creative and technical skills required for making their own films .

This full overnight summer camp offers student artists the ability to choose their own creative and performing arts projects and activities. Their video studio enables campers to write, shoot and edit their own documentaries, music videos, animations and video art. Camper work is screened at a showcase film festival at the end of camp.

In this camp, film crews work in small groups to write, produce, act in and edit their own movie for its World Premiere at the end of the workshop. Films are shot in HD and use Adobe Premiere Pro for editing.

In this two-week program, teens have the opportunity to try each position as they work together with fellow crew members to fine tune their project for its premiere. Films are shot with HD (1080p) cameras and edited with Premiere Pro and Adobe After Effects.

An Advanced Workshop is also available.

Each SOCAPA student writes, directs and edits one film of their own per week in this overnight college credit program. In addition, students are expected to work as crews for one another, providing each young filmmaking the opportunity to work as a Director of Photography, Sound Technician, or Production Assistant each week.

Other courses include screenwriting, cinematography and advanced projects. See https://www.socapa.org/teen-camps/film-camps/ for details.

The Boston International Kids Film Festival offers summer filmmaking camps throughout Greater Boston for ages 10-14. Camps runs 9am-3pm or 10am-4pm. Check out the links below for dates and times in your town. Students can bring their creative ideas to life in a fun, collaborative and exciting environment! Students will learn skills in scriptwriting, character development, improvisation and camera skills. Together, the group will write, shoot and edit a film in a genre of their choosing. Campers will learn to edit their films using professional editing software like Adobe Premiere. All final projects are eligible for submission into the Boston International Kids Film Festival in November 2016. Contact festival directors laura@filmmakerscollab.org and steph@filmmakerscollab.org with any questions.

Summer Film at Boston Arts Academy (BAA) offers an immersive exploratory experience for students ages 12-18. The goal of this program is to enlighten, enhance, inform, communicate, entertain and celebrate our cultures through film. This program, led by Artistic Director John ADEkoje emphasizes students’ development as creators of content. Over the course of two weeks, each student will create their own film; designing, shooting and editing their personal artistic work. All films will be shown at a mini festival in Boston Arts Academy’s black box theater.

NYFA returns to Harvard in June 2016 for its filmmaking workshops in which each student writes, shoots, directs and edits his or her own films. This program remains one of the few that still works with film–so students learn to use the Arriflex 16-S or an HD video camera, depending on their choice of workshop. Tuition includes all cost for instruction, equipment, and an allotment for film and processing. Tuition does not include transportation, room and board, and personal expenses. Students have the option of living in supervised Harvard dormitories on campus.

Email news@newenglandfilm.com to add camps to this story.