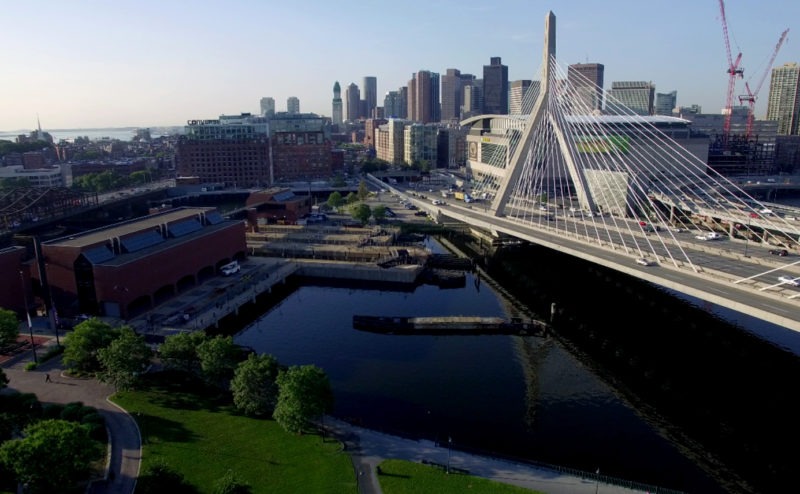 An interview with Thomas Webb of Elevated Perspective Media, a company specializing in drone based aerial solutions.

Technology, creativity and collaboration are at the core of the drone videography company Elevated Perspective Media. Here, Tom Webb talks about how he and his team members, Judson Bell and Chris Walsh, went from a spark of an idea to FAA certification to a cutting edge aerial videography company creating footage for the Travel Channel Shark Hunters for NBC Sports.

Technology, creativity and collaboration are at the core of the drone videography company Elevated Perspective Media. Here, Tom Webb talks about how he and his team members, Judson Bell and Chris Walsh, went from a spark of an idea to FAA certification to a cutting edge aerial videography company creating footage for the Travel Channel Shark Hunters for NBC Sports.

Suzy Cosgrove: How did you come upon aerial photography?

Tom Webb: Chris [Walsh] and I always wanted to have a business together. We threw around some ideas, then he comes by my house and he says, “Aerial Drones, it’s the
new thing. There’s going to be so much filming done with them.”

So instantaneously I wanted in. This is exciting, it’s in the movie industry… it had all the things that I wanted to do – something sort of different than what I had been doing. So we bought our first drone. And we crashed a few times…there’s no question about it, that’s part of the whole learning curve! We
slowly got better with our drones and here we are now…

SC: And what were you doing when he approached you with this idea?

Webb: Well my hobby was flying drones and my job was designing houses. Now my job is flying drones, designing houses a hobby! Chris and Judd (Bell) both work special effects in film. A big part of what we want to do with the drones is not only use it for film but also for GIS (Geographic Information Systems) and mapping applications for drones, which dovetails nicely with building. It’s another natural progression.

SC: When you guys met, did you have a certain chemistry that leant itself to wanting to collaborate?

Webb: The funny thing about all three of us is that we are, personality-wise, very different. I’m a little more cautious, a little more by the book. And Chris – he sort of fits well with
the role he plays as the pilot, mainly. His personality lends itself well to flying. When the drone is in the air you have to be very focused. It’s very hard to do, and he’s really good at it.

SC: The person piloting the drone – are they seeing exactly what the drone is seeing through a camera feed or do you have to keep it within a certain distance within eyesight because of guidelines?

Webb: Yes, it’s called Line of Sight – the pilot is always able to see the drone. They have a monitor on the transmitter which tracks the orientation the drone is flying in and how the shot is framed. The gimbal beneath rotates 360 degrees, so the pilot needs to know how the orientation is. Say you want to do a pull away shot; he needs to know how to maneuver the drone. And the drone can fly it in any direction instantaneously, it’s not like a car where you have to turn the nose and get it going in a certain direction.

SC: Then how much of a storyboarding process happens before for you go for a shoot or jump into a project?

Webb: Well that’s a very good point because I like to have it totally laid out. But generally there’s a DP there and he/she tells us exactly what they want.

SC: Okay. So the pilot is different than the DP (Director of Photography)?

Webb: Yes, so for instance we just did a Travel Channel shoot where we had a single operator. There was a director, a DP and a producer there, so they were able to tell us exactly what they wanted. In that sense there’s a lot of immediate feedback from them. We also suggest shots to them so they can realize what the possibilities are.

SC: It’s great to hear that this sort of thing is happening in Rhode Island. You had to go through a whole approval process right, with the FAA (Federal Aviation Administration)? Was that time consuming or expensive for you?

Webb: It is a free process; it’s just lengthy because you are required to submit a lot of information, which is great. The FAA was very helpful through the whole process. This was huge, every production company was so happy that we had this certification. It legitimizes the business. Things are really picking up; we are really busy.

SC: What kind of companies, or clients, do you typically do business with?

Webb: It runs the gamut. We just did a real estate shoot for someone, we took a whole bunch of aerial video for that and we did Travel Channel and we did Shark Hunters for NBC Sports.

SC: In my research I’ve found that drone videography is economical and environmentally safe. Is this something you are passionate about?

Webb: Absolutely. The thing about drone videography is that the other option is to use a helicopter, which uses fuel and can cost more money. It can be a safety issue too; helicopters can be dangerous. However, helicopters can also go a lot faster than drones. There are things a drone can do that helicopters absolutely can’t do, then there are shots that a helicopter can get that drones definitely can’t. For instance, have you ever seen the show “Sense 8”?

Webb: Ok, the last episode, there are so many drone and helicopter shots. There was a Porsche driving along the highway at about 60 to 70 mph. A drone can’t keep up with
that speed; a drone’s top speed is 35 to 40 mph. Then again, there was a shot where a girl was atop of this mountain and they rotated completely around her, only 10 to 20 feet away. A helicopter couldn’t get that close. I would say that there’s about a 20 percent overlap between what a helicopter can do and what a drone can do. Some people say there’s none, but I say there’s some, even though it’s a different medium altogether.

Webb: Yes. With a drone shot, since you have the ability to get so close, a drone really has to be moving for it to appear as a drone shot. Otherwise it just looks like a crane shot. So
you really need that movement in a drone and that’s what makes a drone special. It provides a great juxtaposition between the subject and the drone itself, because otherwise,
it looks like you’re at the top of the building taking a photo, it needs that movement.

SC: Do you have a project that is your favorite?

Webb: The “Shark Hunters” one was fantastic. The wind was blowing 25 mph and sprinkling, and that’s really the limit for a drone, you don’t want to fly in anything more than that.
What we were shooting for Shark Hunters was all the boats lined up right inside the harbor and they were doing a shot gun start. So they wanted to shoot that as a drone shot,
and the drone was so incredible. It was so windy, it was on the ocean, but it did so well and came out so good, everyone was happy with it. We were nervous, there was no question about that, but we were all happy with the end result.

SC: That’s something I didn’t even think of, that production has to center around what a drone is capable of in certain weather, so that’s really interesting. Do you ever use them inside in a controlled environment?

Webb: Yes we can definitely use it inside as well. Chris likes to fly without GPS, which you can fly inside without, so it’s something we can accommodate as well.

SC: Are you hoping to expand your team within the next few years?

Webb: Absolutely. In fact we’re approaching that point right now. I really hope to start doing the mapping and inspections part of it, Chris & Judd are going to do the filming aspects of it. They’ve been in that world, that’s their experience and GIS is my world so it will work out great.

SC: Coming from the movie world, it is such a niche world, it has it’s own language. And for someone who wasn’t previously involved in film to partner up with someone who is…some really great things can happen. Someone is constantly giving
fresh perspectives.