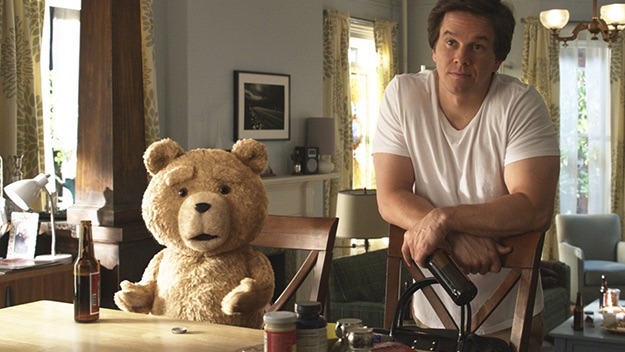 A still from Ted 2, filmed in Boston.

Local Actors on the Set of Ted 2

Local actors talk about working with producer, director, star and co-writer Seth MacFarlane and actor Mark Wahlberg on the set of Ted 2.

Five local actors with speaking roles in the Boston-based comedy Ted 2 talk about working on the film with producer, director, star and co-writer Seth MacFarlane and actor Mark Wahlberg.

It’s not surprising that a film making many people laugh is also making many smile. But for a group of local actors, the reason behind their smiles goes way beyond being entertained. That’s because they were all cast in roles for the box office success Ted 2.

In the film, the teddy bear must go to court and fight to be recognized as a person. Likewise, up-and-coming actors have to fight to take their careers to the next level. Besides having wonderful things to say about producer, director, star and co-writer Seth MacFarlane, the experiences these actors and actresses had filming Ted 2 are helping them move to that next level.

For Altina Lester, a former restaurant owner who lives in Rhode Island, that next level is the first one. Lester said she loved acting when she was growing up in Portugal. And when a friend saw a notice that Boston Casting was looking for a woman, who speaks Portuguese, for the role of Portuguese Neighbor, she told the casting agency about Lester.

Even though she didn’t have a resume or a headshot, Lester was called for a second audition. She said MacFarlane wanted to know if she could scream and act angry. “I told him ‘Yes, I will be a real bitch.’ So, they liked me, and I got a call for the part,” she recalled. She added that while she loved acting in the film and hopes to do more roles, one of the things she enjoyed most was meeting MacFarlane. “He is a very lovely young man. Also, I love all the attention.”

Although twenty-something actress and model Maggie Geha has been in a number of other mainstream and independent films, being in Ted 2 was also a great experience for the New Yorker with New England roots. Despite auditioning in New York, the actress, who played a nurse, echoed the sentiments of the local actors. She said that working with MacFarlane and Mark Wahlberg – who co-stars as Ted’s best friend, John – was the most rewarding part of being in the film.

“Seth wore so many hats simultaneously to make this movie, and he looked great in all of them. He was encouraging and always full of laughs,” said Geha. “Mark is witty and charming and – even given the subject matter – he still managed to be a complete professional. They’re both artists I look up to, and I was honored to work with them.” 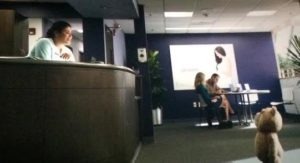 Becki Dennis on the set of Ted 2.

A friend that Geha made on the set is Becki Dennis. A local actress who has had roles in American Hustle, a TV movie and independent films, Dennis was thrilled to be part of Ted 2. She did everything she could to prepare for her cold readings and the call-backs. She said that included doing vocal warm-ups, arriving at the first audition early so she could rehearse the sides in a ladies’ room and going straight from wrapping the indie drama, Spin the Plate, that she stars in to the first call-back audition.

She said she was grateful to MacFarlane and impressed by his ability to multi-task so well. “He was also just a genuinely nice person, who took some time to speak with me and Maggie Geha in our downtime on set,” said Dennis. “I may have just one line, but I have worked so hard to get to this point, and these roles are not easy to come by. To now have people watching this movie…all over the world is extraordinary.”

William Xifaras, another local actor who is no stranger to film sets, has had principal roles in films such as The Heat and The Equalizer. For him, the challenge of winning each audition to get the role of Boston Neighbor was one of things he enjoyed the most. He called MacFarlane “an incredibly creative man – not to mention excellent director” and said he had “only positive things to say about the whole experience.”

Another actor who was cast in the film as a doctor – and is currently working on Central Intelligence – is local actor and writer Robert Woo. Even though his scene was ultimately cut, Woo said he enjoyed working on the film.

“When it came to the actual shoot, I spent two days on the set,” explained Woo. “We blocked the first day, and shot the second. It was my first time being on the set of a big Hollywood movie, so just taking it all in was very cool. Of course, meeting Mark and Seth was a highlight as well, and getting to chat with the various other actors on set. I’ve only done local commercials and industrials, so it was a trip to be on that set.”

The other actors would certainly agree. Ted 2, starring the New England natives MacFarlane and Wahlberg, continues to bring smiles to their faces, while helping them move to that sometimes elusive next level.

Ted 2 continues to screen in theaters. See the film’s website for more information.

Writer Christine Galeone is a freelance writer and screenwriter.