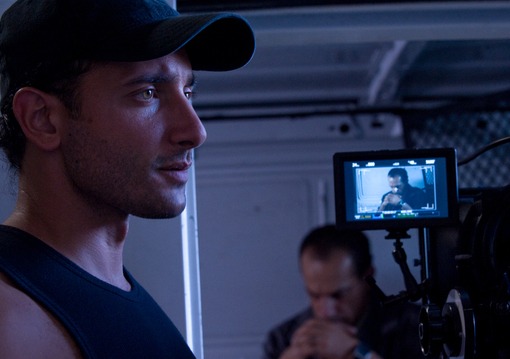 Giovanni Zelko, director of the film The Algerian.

Giovanni Zelko on his film The Algerian

An interview with Giovanni Zelko about his film The Algerian, scheduled to open in 20 different cities nationwide in the next few weeks.

Giovanni Zelko’s latest film The Algerian is currently in limited release and scheduled to open in 20 different cities nationwide in the next few weeks. Here, Zelko talks about his film background at Boston University, his inspiration for the film, and some sage advice he received from Clint Eastwood.

Giovanni Zelko got his start in films in a media class at his high school in 1990, back when editing for beginners happened from one VHS tape deck to another.

He found one of his earlier influences to be James Cameron, whom he would later work with on Avatar, and took some clips from Cameron’s film, Terminator 2, to make a five-minute trailer of his own.

After that, Zelko enrolled in the film program of Boston University where he graduated from in 1996. He states,  “I went to focus on film theory, film analysis and screenwriting, and I felt BU was a better environment for that.” And while he did make a thesis film his junior year, a 16mm film that landed him an internship at Roger Corman’s Studio in Los Angeles, Zelko spent much of his time at BU writing, so much so, that he ended up publishing a book of film theory essays he wrote while at BU, entitled Living the Dream: A Collection of Essays From Film School.

Zelko’s new film The Algerian chronicles the path of a young Algerian man making his way to America as a sleeper cell for a terrorist group from his home country. Zelko, who has many credits on this film: Writer, Director, Executive Producer, Editor, Distant Location Cinematographer, and Actor, got the idea for it chatting with the film’s lead actor, Ben Youcef, who has a storywriter’s credit on the film, about both of their experiences in America in a post-9/11 world. Youcef initially had the idea to make the story about the man who was the 20th hijacker in the 9/11 attacks, but had no luck shopping it around to production companies.

After some more discussion, Zelko and Youcef came up with the idea for The Algerian. When I asked Zelko what the film was about, he reversed the question on me, “What do you think it’s about?” I told him my answer, (which I won’t reveal because it may spoil the film’s ending), to which he responded, “You’re dead on.”

The Algerian has won 19 awards at different film festivals in the US, and has found distribution through Hanover House. This previous Friday it premiered in Washington DC, which Zelko appreciates as he refers to the film as a “political thriller.” I asked Zelko what some reactions to the film were, he said, “It was a consistent response, people liked that it was balanced, showed rational and the good and bad sides of the US.”

Zelko spent two years shooting the film, parts of which he shot on site in Algeria. During this time, Zelko also worked as a Lighting Technician for different big budget features, one of which was X-Men First Class. I asked him what the biggest difference was between working on studio pictures and shooting his low-budget feature, he says it was an “interesting parallel” and that “the budget” was of course the biggest difference.

Zelko named some of his favorite films as Raiders of the Lost Ark, which he called Speilberg’s greatest film, Chinatown, Three Days of the Condor, and Coppola’s Apocalypse Now, which he said might be his all-time favorite film. Zelko recently finished Executive Producing and working as Second Unit Director of Photography on another production entitled H4, featuring supporting actor from The Algerian, Harry Lenix.

Zelko also gave me a hint about his next Directing/Producing project, which he wrote with partner Jim Smith, entitled Saint Mary’s Secret, saying only that it will be “a psychological thriller” and “a cross between Rosemary’s Baby and The Shining.

When I asked Zelko about his advice to aspiring filmmakers, he said, “I’ve asked many directors the same question myself,” including to Clint Eastwood, who replied to Zelko’s question with simply, “Learn to edit kid.”

Zelko’s own advice is simple and optimistic, “Filmmaking is constantly changing, technology is changing, the need for content is so voracious, no matter what you’re doing, you can always find an outlet for it.”

The Algerian will be a limited release and is scheduled to open in 20 different cities nationwide in the next few weeks. You can find out more about the film and watch a trailer at www.thealgerianmovie.com. For more information on Giovanni Zelko visit his website at www.giovannizelko.com.