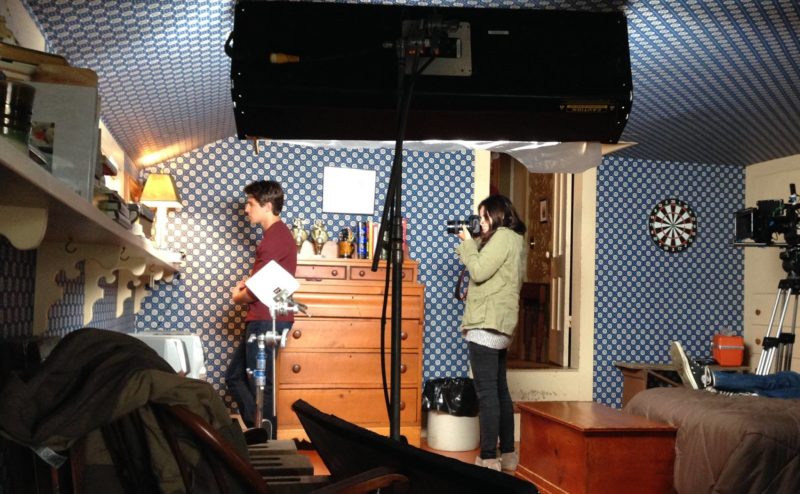 On the set of Fair Haven.

Film Financing and Finding the Audience

​Fellow female filmmakers discuss work, life, and more in this new series, Females in Film. For this installment, NewEnglandFilm.com writer Catherine Stewart talks to Kerstin Karlhuber about the fundraising and distribution for her feature film, Fair Haven.

You can read the first part of this interview on the creative process for Fair Haven, starring Tom Wopat and Michael Grant.

Here, in the second part of my two-­part interview with director Kerstin Karlhuber, we discuss fundraising, distribution, and location.

Karlhuber says she realized a few years ago that “learning how to fundraise was a necessity if I wanted to be a filmmaker.”

“Without the funds, there is no film, unfortunately,” she says. “As my projects grew and budgets expanded I knew I had to become an expert on fundraising, sales, and ever changing distribution platforms. I took a film financing course and it made all the difference. Not only did I learn those skills, but I met producer Tom Malloy who ultimately came on board and produced Fair Haven.”

Karlhuber found that the first step in financing was bringing together a compelling cast and crew. Producer Tom Malloy brought his expertise, and his connections helped lead her to both financiers and actors. Actors Tom Wopat (Dukes of Hazzard, Django Unchained), Michael Grant (Secret Life of the American Teenager), Gregory Harrison (Reckless, Trapper John MD), and Actress Jennifer Taylor (Two and a Half Men) came on board, which, she says, created a package that people wanted to invest in. Ultimately, they secured private investments which funded production, and after production, they did another round of financing for post-production. “Because we had something to show people and had the momentum from just having completed an exciting and successful shoot, those final funds were so much easier to secure,” she says.

“Fundraising for Fair Haven was like a crash course,” explains Kerstin Karlhuber, director of Fair Haven and owner of Silent Giant Productions. “As uncomfortable as it was for me, once we were off and running, I had no choice. I had to get really used to pitching the film and myself, which has never been easy for me. But when it’s all on the line you have no choice.”

Karlhuber recognizes the importance of collaboration in fundraising. “Tom Malloy told me once that financing a film is like building a house. For us, it began with the foundation–those initial attachments: producers, casting directors, etc. Then we built the walls with cast attachments, and the roof was built after we wrapped and had that footage to show off to secure the final funds. I used to be completely overwhelmed by the thought of funding an entire project at once. But I’ve learned it doesn’t have to be all or nothing–it’s one step at a time.”

For those interested in learning about film financing, Karlhuber recommends reading Tom Malloy’s film financing book Bankroll and Carole Lee Dean’s The Art of Film Funding. “Carole  also offers workshops through her nonprofit From the Heart Productions, which I took, and made all the difference for me,” Karlhuber says.

Karlhuber and her team are now finalizing details for release and distribution of the film, “I hope that Fair Haven gets the audience it deserves. I don’t have unreasonable expectations, I just want it to have an audience. It’s a sweet film with a message that can provide hope for many young people struggling with identity and being true to themselves.” Karlhuber would like it to open a few closed minds as well. “I hope for it to be successful enough to allow me to make a follow up feature.”

Karlhuber wants to prove her abilities by making films that can move people­­, but she also wants to make sure her investors receive a return. “​Fair Haven is my first feature, it’s a small film, but a meaningful one and I hope that it’s the first of many in my career. I hope that it will be a launching pad to new and exciting projects. The first feature is so hard to get off the ground because you have no track record. Making a feature film is an incredibly stressful and difficult process, now I have proof that I can deliver and I hope it helps to open doors for me.”

Alongside the production of Fair Haven, Karlhuber runs Silent Giant Productions where she creates commercial work. “It’s become increasingly difficult to balance commercial work and the film projects. It is a great problem to have and I am in the process of expanding the company, bringing more people on to keep up with both the film and commercial side of the business.”

Karlhuber explains that the workload on Fair Haven ebbed and flowed depending on the various stages of production, there were times when things were relatively quiet and times when it was all hands on deck.

“But that’s what I love about filmmaking,” she says. “It’s always changing. I’m always at a new location, shooting something about a different topic or product I’ve had to become an expert on. As a director I’m fascinated by people and characters, I get to work with new and interesting people every day and it inspires me.”

Karlhuber hopes to continue to make work, with increasingly larger budgets that can reach wider audiences. She also wants Silent Giant to create projects that continue to intertwine meaningful messages and topics with entertainment. Fair Haven tackles the dangers of reparative, or ex­gay therapy. It follows a confused young man’s journey through trying to be who everyone else wants him to be, yet knowing deep down that he has to be true to himself.

With that focus on message in mind, Karlhuber is currently developing two very different features. “It’s up in the air right now as to which one we’ll produce first. It all depends on who’s interested and what takes off. I worked for years on a project before Fair Haven that we never got off the ground. Then Fair Haven happened fairly quickly. You just don’t know what will speak to someone and suddenly take off. I’m excited about both and can’t wait to see what’s next.”

As Karlhuber develops her next work, and send Fair Haven out into the world, she is spending more time in her native state Vermont. “I go up to see family and to decompress. I also go up whenever I’m developing a creative project. The space helps me brainstorm, write, edit, etc. I love to shoot in New England. Vermont, in particular, has been a picturesque background for several of my films, and I’m sure will be again.” She also believes that one day, Silent Giant could be based in New England. “I think it’s less important these days to be in NY or LA, people are making amazing films all over the country. I’d like to always have one foot in NYC or LA, but I think about how nice it would be to move back to Vermont and enjoy a slower pace.”